Saudi Arabia is impenetrable … and Al-Faisal hung up the phone... 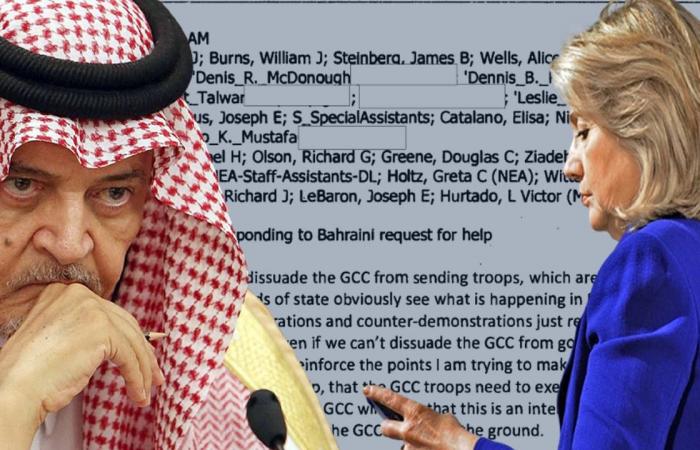 The US State Department’s decision to declassify a number of e-mails from former US Secretary of State Hillary Clinton, the former Democrat’s candidate for the 2016 US presidential elections, brought the spotlight back to the Clinton leakage issue that raised question marks, especially with regard to the Brotherhood and the relationship with Qatar.

The private mail messages, which Hillary was using, reveal the secrets and details of the volatile positions of the former US President Barack Obama’s administration in the Middle East and support for what was known as the Arab Spring revolutions, in addition to revealing the suspicious Qatari role in igniting crises in the countries and countries of the region.

The leaks showed the strength of the Kingdom’s coherent internal position, the leadership and the people, and in the text of the letter of Charles W., the modern American ambassador to Saudi Arabia at the time, to Clinton, said that: “Saudi society is the only one on this planet that has not been penetrated by Western colonialism and has not penetrated any European armies, and its borders have not Violated neither by missionaries nor by merchants. ”

The leaks also touched on the incident of the late former Saudi Foreign Minister Prince Saud al-Faisal closing the phone in Clinton’s face after she asked Riyadh not to send Saudi forces to Bahrain in 2011.

As one of Hillary’s emails revealed the kingdom’s position rejecting the invasion of Iraq in December 2002, Clinton said: “The Saudis no longer trust us to take their interests into consideration or to protect them from their enemies. After what happened in December 2002, the United States invaded Iraq and Saudi Arabia was strongly opposed to that.” .

In another context, one of Hillary’s leaks revealed that the Qatari government had opened its doors to elements related to terrorist acts and plans by establishing a joint media organization between the Brotherhood and Doha, worth $ 100 million.

The leaks indicated that Hillary visited the Qatari network in May and left on the evening of the second of May. The program of the US Secretary’s visit included a private meeting at the “Four Seasons” hotel with the director of the Qatari “Al-Jazeera” channel, Waddah Khanfar and the general manager of the English-language Al-Jazeera channel, Tony Borman Then, a meeting with the members of the Board of Directors of Al-Jazeera at the headquarters of the channel, in which the Qatari leadership participated.

The discussions also included a visit by the Al-Jazeera delegation to Washington in mid-May. These meetings ended with a meeting with the former Qatari Prime Minister Hamad bin Jassim Al Thani, who is considered the ultimate authority in the Al-Jazeera channel.

These were the details of the news Saudi Arabia is impenetrable … and Al-Faisal hung up the phone... for this day. We hope that we have succeeded by giving you the full details and information. To follow all our news, you can subscribe to the alerts system or to one of our different systems to provide you with all that is new.