60 billion riyals, the transactions of the Saudi debt instruments market... 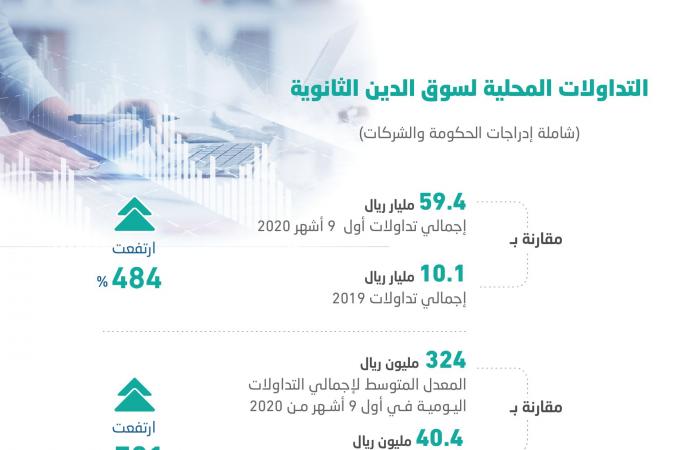 The local debt instruments market achieved the best monthly and quarterly performance ever, supported by the longest chain of traded volumes, as the total values ​​from the beginning of 2020 until the first days of this month exceeded the barrier of 60 billion riyals, according to the monitoring unit of reports in Al-Eqtisadiah newspaper.
This comes after an improvement in the sentiment of traders, with the emergence of local and international developments, all of which are encouraging attracting foreign liquidity to the fixed income market in Saudi Arabia.
The secondary trading volumes of fixed income instruments recorded during the first nine months of 2020 a growth rate that is about to touch six times, compared to the total transactions for the full year of 2019 amounting to 10.16 billion riyals.
The monitoring showed that the total value of transactions for the past nine months reached 59.4 billion riyals, a record high for the first time since the inception of the market.
The market, which is designated for “bonds and sukuk” trading on the Saudi Stock Exchange, witnessed transactions amounting to 11.2 billion riyals during the past month alone, which is the highest monthly in more than ten years, following the decision of the Capital Market Authority, in early September 2020, to allow resident foreigners. And non-residents will directly invest in listed and unlisted debt instruments, but it is not known at present whether the additional liquidity that entered last month is related to foreign investment or just domestic liquidity.

The remarkable activity of the brokerage firms not formally appointed to play the role of market makers continued when they collectively acquired 53.94 percent of the trading volumes that passed through them in the first nine months of this year, compared to 46.06 percent of the share of the five market makers appointed in the total trades. . Knowing that the five market makers started the year 2020, they captured 18.7% of total January trading.
These figures show the progress of the five appointed market makers towards regaining their lost share of total trades, but it is unlikely to end the year to repeat the same 2019 scenario, when the total trades that passed through them reached 80.85 percent.
According to Al-Eqtisadiah’s monitoring, with the entry of strong brokerage firms this year, observers do not rule out that these companies continue to control total trading, especially since three of those companies are on the list of the top five brokerage firms in terms of total trading volumes of listed fixed-income instruments.
The monitoring showed that some market makers in general have dominated the execution of the largest number of deals compared to others, “a clear indication of their efforts to stimulate trading.”
He told the newspaper, a source familiar with secondary trading activities, “One of the reasons for the superiority of brokerage firms over appointed market makers is that some institutional clients deal with a specific brokerage firm, and therefore deals are only executed through it, which gives them an advantage in terms of the sheer volume of deals they have completed.” During secondary trades in the past months. ”

According to financial data, the secondary markets of the fixed income market in Saudi Arabia, under which the government and corporate listed debt instruments are part, achieved three-digit growth rates in total trading volumes in the first nine months of 2020, equivalent to more than five times the total traded in the last three Years, which reached 11 billion riyals.
Government securities give closer to guaranteed annual dividends to investors during the first nine months of this year compared to the last three years of trading.
Thus, the strong growth in monthly trading volumes continues, to record values ​​unprecedented in the history of the market for more than ten years. The reason for investors’ appetite for the specialized stock exchange for trading in bonds and sukuk is due to several factors, the most important of which is the search for the highest return at a time of low interest.

Al-Eqtisadiah monitoring showed that the average rate of total daily transactions increased to 324 million riyals during the first nine months of this year, with a growth equivalent to 701 percent, compared to the total average trading for the full year of 2019, which amounted to 40.4 million riyals, excluding weekends and public holidays.
The analytical study was based on the latest official data issued by “Tadawul”, which revealed the total trading of sovereign debt instruments and companies.

The relationship of interest to debt instruments

It is noteworthy that the market value of sukuk and other fixed-income securities changes according to the changes that occur in interest rates and other factors, as the prices of fixed-return debt instruments rise, the lower the interest rates, and the lower the prices of those securities the higher the interest.
And the security issued by the Saudi government is guaranteed only to pay the declared interest and face value upon maturity, and just as is the case with other fixed-return securities, the government-guaranteed securities will fluctuate their value when interest rates change.

Some of the sukuk listed on the Saudi market may become less liquid than others, which means that they cannot be sold quickly and easily, and some sukuk may be difficult to liquidate into cash because there is no secondary market due to regulatory restrictions or restrictions on the nature of investment or the absence of interested buyers. With this type of assets, this may negatively affect the performance of the assets companies’ funds and the unit price.
For example, the sukuk market may go through periods of significantly low liquidity, which may lead to difficulty in maintaining stable and / or fair prices in purchase transactions, and vice versa in the event of high liquidity in the event of a need to sell. This may lead to recording certain losses for companies ’funds. Assets.

Saudi Arabia has undertaken several reform initiatives to promote secondary trading in fixed income instruments such as bonds and sukuk. Before the decision to restructure the financial compensation for issuers and dealers, and the accompanying reduction in trading fees during April of 2019, Saudi Arabia listed and traded its sovereign issuances for the first time in 2018. This decision was followed by the use of market makers authorized to activate secondary trading of government issuances. Both events occurred in July 2018.

In the past, trading fees were described by observers as being exaggerated, reaching ten basis points, eight basis points going to the licensed companies “brokerage firms”, and two basis points divided equally between the Capital Market Authority and “Tadawul”.
One of the reasons that licensed firms score eight basis points is due to the lack of liquidity, which leads to limited deals per month. However, the level of monthly trading has taken a high path since the government debts were listed, which led to the increase in the numbers and values ​​of executed deals.
And in April 2019, a long-awaited package of reforms was announced by dealers in fixed income markets in Saudi Arabia, as the remuneration for services provided to issuers and traders was restructured.
The restructuring of fees is intended for two tranches, the first being the issuers, and these amendments will contribute to reducing the fees related to listing on the stock exchange, by a percentage of 25%, and this number may increase or decrease, according to variable factors related to the issuer.
The other segment is in the interest of investors, as the trading fees have been reduced, as the share of a trading company reaches between a basis point to half a point “except in cases where either the seller or the buyer is a specific primary dealer.”
The decision to lift controls on commission for brokerage firms, by removing the minimum and maximum limits for executing buy and sell deals, is expected to lead to the creation of competition between these companies by introducing low fees to attract clients. In the event that any sukuk transaction is executed, Tadawul will deduct its share from the financial consideration, as well as the brokerage firm, through which the purchase or sale order was made.
The Board of the Capital Market Authority issued its decision in July 2020 to continue exempting exporters wishing to offer debt instruments in a public offering from paying the fees collected to the Authority upon submitting an application for registration of debt instruments, when studying the application for registering debt instruments, and when registering debt instruments. Until the end of 2025.
The Capital Market Authority stated that this initiative comes within the framework of its endeavor to enhance the regulatory environment and stability in the financial market, and to achieve the role of the financial market in facilitating financing, stimulating investment and providing the necessary support to maintain the safety and stability of the financial sector and all its participants.

The increased liquidity in circulation during the first half of this year accelerated the entry of two new brokerage firms, bringing the number from 12 to 14 active companies in the secondary fixed income markets.
June witnessed a remarkable entry for an experienced brokerage firm in stock market trading. Thus, the number of brokerage firms that were attracted to fixed income market trades recorded a growth rate of 16.6 per cent after the entry of the two companies, where the number was 12 at the end of last year.
With the increase in the value of one sukuk, which is equivalent to alpha compared to stock prices, this means that the average rate of value of government sukuk deals for “one deal” per individual investor will be higher when compared to stock deals. Therefore, it is natural for the brokerage firms to increase the execution fees of buying and selling sukuk deals.
While the number of financial intermediation companies in the Saudi stock market is 31 companies, this number varies with the sukuk and bond market. After going back to all the brokerage firms that executed buy and sell deals in the secondary market of “Saudi debt markets” within three years, it becomes clear that the numbers The brokerage firms that were monitored are 14 companies, “including five market makers.”

These were the details of the news 60 billion riyals, the transactions of the Saudi debt instruments market... for this day. We hope that we have succeeded by giving you the full details and information. To follow all our news, you can subscribe to the alerts system or to one of our different systems to provide you with all that is new.