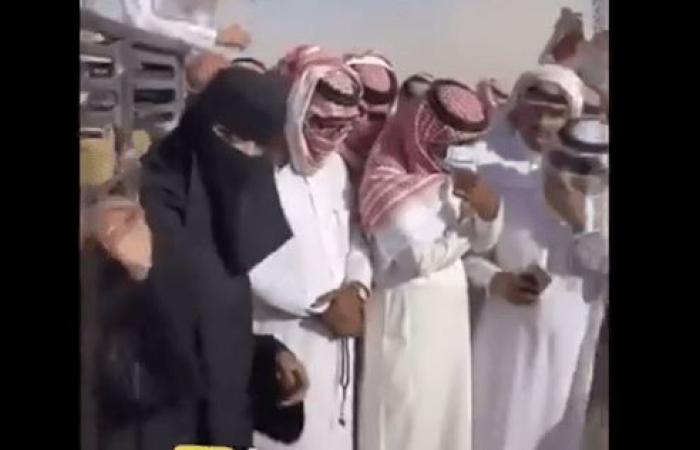 The Saudi celebrity “Snapchat”, Rasha Al-Abdullah, sparked widespread controversy on social networking sites, after she was the only woman who participated in the public camel auction for men in Hafar Al-Batin Governorate, in the northeast of the Kingdom.

Rasha Al-Abdullah appeared in several videos monitored by “Watan”, standing alone among the hundreds of men who gathered on her while filming camels and the event in general.

There was also a verbal altercation between Rasha Al-Abdullah and one of the men for an unknown reason, and I replied to him: “The known does not know, rest and keep yourself in yourself.”

Rasha Al-Abdullah appeared while sitting in the desert and talking about the auction, confirming that she had been attending it for days, and she asked her followers not to disturb her by sending remembrances and verses that prohibit her presence as a single woman among men, and she said: “I am a sanctuary to walk in the lady. .

The tweeters interacted with the “Snapchat” star, and launched the hashtag # Rasha_Abdullah, during which they attacked and posted clips and pictures that show men gathered around her as if they had never seen a woman in their lives, according to the words of the tweeters.

This auction is considered one of the largest events in Hafar Al-Batin, as owners and interested people from all over the Kingdom attended to it.

The sales value of the first auction in Hafar Al-Batin Governorate within five days since its inception exceeded 30 million riyals, and the auction will continue until the current month of Safar.

These were the details of the news “Watch” Saudi Arabia, Rasha Al-Abdullah, took off the “cloak of modesty”... for this day. We hope that we have succeeded by giving you the full details and information. To follow all our news, you can subscribe to the alerts system or to one of our different systems to provide you with all that is new.