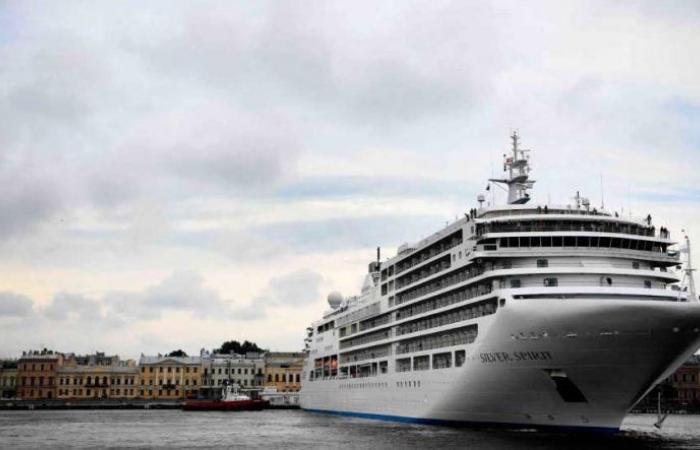 On board the “Silver Spirit” – AFP: A luxury Saudi ship is sailing near blue islands and lakes, on a voyage aimed at relaunching tourism despite fears of the new Corona virus, and reviewing mega projects on the Red Sea coast despite austerity measures.
And last August, the “Silver Spirit” ship began offering hundreds of kilometers off the coast, in an area that oil-rich Saudi Arabia hopes to turn into a global tourism site and a center for attracting investment as part of an ambitious plan to diversify the crude-bonded economy.
The luxury vessel, which was chartered for two months by a company owned by the Saudi sovereign “Public Investment Fund,” provides a window to view projects worth billions of dollars that the Kingdom is developing on the Red Sea coast despite austerity measures.
“We define the Red Sea to the world (…) and highlight its value,” Tourism Minister Ahmed Al-Khatib said in an interview on board the ship.
During a four-day cruise last week, the ship sailed near huge development projects, including the “Red Sea” project, which aims to convert dozens of islands and a group of mountain sites on the Red Sea coast into luxurious tourist resorts.
For a few hours, the ship anchored on two islands, between them, Sandala, which is part of the “NEOM” project, the huge area slated to be built at a cost of 500 billion dollars along the Red Sea coast and in areas in Jordan and Egypt.
Passengers on the ship were allowed to roam the small island littered with coral reefs – people are usually restricted from entering – on golf cart and ate at a makeshift restaurant set up on the beach.
A number of well-known social media account holders were invited to take part in the full-cost paid trip, during which they took pictures on the white sandy beaches.

Some question the feasibility of these mega projects that come in the midst of a decline in government revenues due to the shock of low oil prices in addition to the emerging Corona virus crisis.
Saudi Arabia, the world’s largest oil exporter, has announced that it plans to cut government spending by more than 7 percent next year, while the general budget is expected to record a deficit of 12 percent of GDP in 2020.
Meanwhile, Saudi Arabia is awarding billions of dollars in contracts for mega construction projects.
And recently, the Saudi Public Investment Fund awarded contracts to develop Neom to the American company, Bechtel, for project management, as well as to the AECOM company.
According to the Middle East Economic Digest, the Red Sea project has awarded contracts worth five billion riyals ($ 1.33 billion) and is expected to award contracts worth more than 3.5 billion riyals ($ 933 million) by the end of this year.
“New projects on the Red Sea coast are moving ahead despite Covid-19 and the drop in oil prices,” said Colin Furman, editor of the newsletter. “During the next three years, the Saudi government will be smaller, but its projects will be bigger,” he added.
The Saudi Minister of Tourism says that the projects are proceeding at a “very fast” rate, stressing that they have “unlimited support” from the Saudi leadership.

Not a positive step

Some criticize the operation of this luxury vessel at a time when the Covid-19 pandemic has affected global tourism.
Last year, Saudi Arabia launched tourist visas and opened the door to tourism as part of Saudi Crown Prince Mohammed bin Salman’s plan to diversify the economy. = The prices of the cruise on the boat start from 6000 riyals ($ 1600), and it seems that it aims to attract wealthy tourists from inside Saudi Arabia. With the suspension of travel due to the virus.
The cruise offers spacious suites as well as a personal butler service. Almost none of the women on the ship wore the abayas imposed on Saudi women.
The trip set off from “King Abdullah Economic City”, a huge project near Jeddah that cost billions of dollars, but it is a warning of the fate of some huge projects.
The giant project, launched more than ten years ago as part of a diversification plan to build new cities, appears almost empty and reflects the difficulties the country faces in attracting investments in sectors other than the hydrocarbon sector.
Karen Young of the American Enterprise Institute believes that “the political commitment to move forward with mega projects appears to be there.”
However, she pointed out that “spending limited state resources on projects that do not focus on creating job opportunities or removing the largest possible number of people from government sector salaries is not a positive step towards further economic diversification.”

These were the details of the news A chartered luxury cruise ship seeks to re-launch tourism in Saudi... for this day. We hope that we have succeeded by giving you the full details and information. To follow all our news, you can subscribe to the alerts system or to one of our different systems to provide you with all that is new.