Trump’s term has ended, and with it the myth of the... 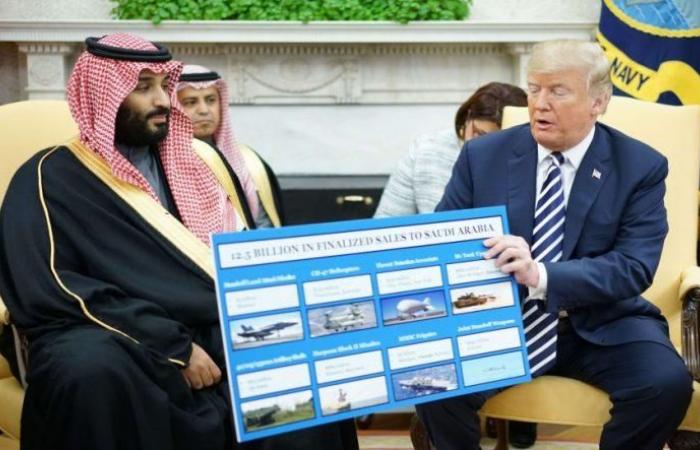 President Donald Trump’s term is nearing its end, and there is only three months left to hand over power in the event of his expected loss, and with him the huge arms deals that have been talked about and exceeded $ 460 billion with Saudi Arabia, which have been confirmed as a myth that is not completely fulfilled by military reality.

President Trump visited Riyadh in May 2018 and then received Saudi Crown Prince Mohammed bin Salman at the White House, and announced an arms deal amounting to $ 460 billion, a deal that dazzled the world because it is the largest in history, and the question began about the type of weapons that Saudi Arabia will acquire.

Two years later, no real deal has been signed between the United States and Saudi Arabia that includes weapons capable of changing the military situation in the Middle East or the balance of power between Tehran and Riyadh. Saudi Arabia wanted to acquire “THAAD” systems to counter Iranian missiles, and to boost its fleet with more “F-15” aircraft. There is advanced understanding and discussions, and no major deal has yet been finalized.

There is one exception, which is the approval of the US administration and without congressional approval to sell ammunition to the Saudi army, the established procedure does not require the approval of various US agencies such as the Pentagon, Congress and the State Department. The White House did this to provide the Saudi army with ammunition to confront the Yemeni forces in the ongoing war in Yemen and the Saudi south, to spare Riyadh a defeat.

And the value of 460 billion dollars, prompted the question: Does the amount reflect the military reality? Then is the Saudi army ready to employ huge amounts of American military equipment? Does he have enough experience? Moreover: Are US factories able to fulfill deals of this magnitude for a single country? Finally, what kind of military hardware will Saudi Arabia acquire from the United States?

The United States produces advanced weapons such as nuclear submarines whose price exceeds two and a half billion dollars, such as the “South Dakota” submarine, then “B-2 Spirit” bombers, which cost one billion dollars, and aircraft carriers. Washington does not sell such strategic weapons. It guarantees its superiority, and the Saudi army is not qualified due to its limited use of these weapons. At the same time, Washington does not want to sell Saudi Arabia even the “F-35” aircraft that it would sell to Turkey had it not been for the S-400 missile crisis.

Among the most important and accurate documents on arms sales in the world are the reports issued by the “Congressional Studies Service” or the “Congressional Research Service”, a body linked to the US Congress, whose reports are considered to be of a very high level, and most of the time they are secret with some exceptions. Some documents and reports.

The period 2008-2015 was marked by one of the highest holdings of Saudi weapons in its military history. And deducts from the amount of $ 30 billion in commissions that sometimes reach 30%, as the commission scandals associated with Saudi deals are known around the world, so that Saudi Arabia has actually acquired weapons for less than $ 20 billion, less than $ 3 billion annually.

These were the details of the news Trump’s term has ended, and with it the myth of the... for this day. We hope that we have succeeded by giving you the full details and information. To follow all our news, you can subscribe to the alerts system or to one of our different systems to provide you with all that is new.