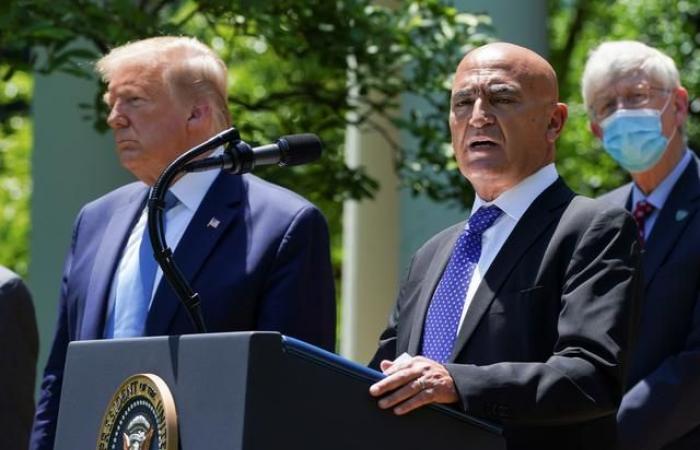 Slaoui, a former professor of immunology at the University of Mons, Belgium, predicted that Operation Warp Speed will make available a few hundred million doses of a COVID-19 vaccine by the end of the year.

Trump described the operation as a “momentous medical initiative,” and a “massive scientific, industrial and logistical endeavor unlike anything our country has seen since the Manhattan Project.”

He added: “We’re proud to announce the addition of two of the most highly respected and skilled professionals in our country — worldwide respected. Operation Warp Speed’s chief scientist will be Dr. Moncef Slaoui, a world-renowned immunologist who helped create 14 new vaccines — that’s a lot of our new vaccines — in 10 years, during his time in the private sector.”

Trump described Slaoui as “one of the most respected men in the world in the production and, really, on the formulation of vaccines.”

Slaoui, who has published more than 100 scientific papers on the topic, and is a member of the International AIDS Vaccine Initiative’s board of directors, joined Trump in announcing Operation Warp Speed.

“I’ve very recently seen early data from a clinical trial with a coronavirus vaccine,” said Slaoui, who headed the global vaccines development program at GlaxoSmithKline from 2015 to 2017. “This data made me feel even more confident that we’ll be able to deliver a few hundred million doses of vaccine by the end of 2020.”

Trump said Slaoui’s and Operation Warp Speed’s primary mission will be to finish developing, and then manufacture and distribute, a proven coronavirus vaccine “as fast as possible.”

He said: “We’d love to see if we could do it prior to the end of the year. We think we’re going to have some very good results coming out very quickly. In addition, it will continue accelerating the development of diagnostics and breakthrough therapies.”

Slaoui called it “a great honor” to “serve our country and the world” in combating the pandemic.

“Operation Warp Speed’s objectives are very clear. The president has described them. And I believe they’re very credible. I also believe they’re extremely challenging,” he said.

“However, I’m really confident that … we’ll be able, and we’ll do the utmost, to deliver these objectives.”

Perna, who currently oversees 190,000 service members, civilians and contractors as commander of the US Army Materiel Command, will head the operation’s logistics.

Trump said: “That means getting it out. We’ve got to get it out there.” The operation has brought together “all of the experts across the federal government,” he added.

“This historic partnership will now bring together the full resources of the Department of Health and Human Services with the Department of Defense. And we know what that means. That means the full power and strength of the military.”

Similarly, during World War II the US-led Manhattan Project brought together the world’s leading industrial and scientific leaders to create the first atomic bombs, which were dropped on the Japanese cities of Hiroshima and Nagasaki in August 1945, forcing Japan to surrender.

These were the details of the news Moroccan-American doctor to head COVID-19 vaccine program for this day. We hope that we have succeeded by giving you the full details and information. To follow all our news, you can subscribe to the alerts system or to one of our different systems to provide you with all that is new.