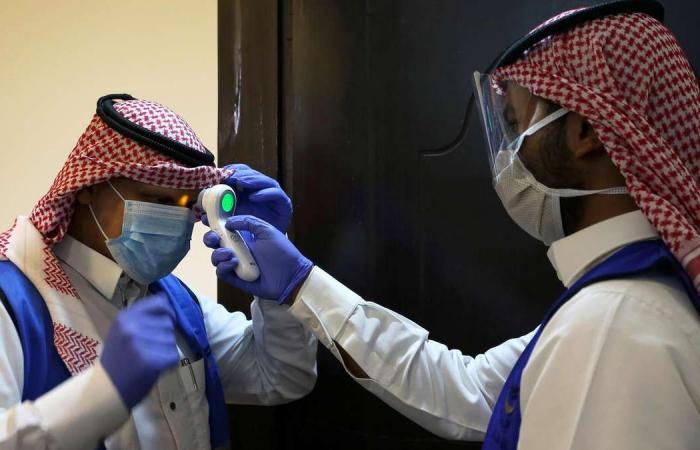 Thank you for your reading and interest in the news Coronavirus: Saudi Arabia's infected cases near 43,000 and now with details

Hind Al Soulia - Riyadh - Saudi Arabia reported on Tuesday 1,911 new coronavirus cases over the last 24 hours, bringing the total in the kingdom to 42,925.

The country reported nine new deaths, taking the total to 264, according to the Health Ministry.

The daily number of new cases in the kingdom first passed 1,000 on April 18.

Saudi Arabia’s health authorities said that 2,520 people have recovered from the virus during the last 24 hours, taking the total number of recoveries to 15,257.

Confirmed cases of the disease passed the 100,000 mark collectively in the six GCC states on Monday, as global deaths neared 300,000.

Other countries in the Gulf also recorded a high number of infections.

Qatar recorded 1,526 new cases during the last 24 hours, bringing the total number of active cases to 25,149, the Health Ministry said.

Doha has the second highest number of infections in the GCC region.

It did not report any new deaths on Tuesday. The total number of fatalities stands at 14.

The ministry said that 3,019 people have recovered since the disease started to spread in the region.

Kuwait said it found 991 new cases during the last 24 hours.

The total number of cases are now 10,277 with 75 deaths, the Health Ministry said.

There are 7,101 patients receiving treatment, including 158 in intensive care units.

The ministry said that 194 patients recovered from the coronavirus during the last 22 hours, raising the total number of recoveries to 3,101.

Kuwait is currently under a fully imposed curfew aimed at curbing the spread of the disease.

Bahrain announced 173 new cases during the last 24 hours, bringing the total of coronavirus cases to 5,409.

The health Ministry said that an 80-year-old Bahraini citizen died from the disease.

Oman, which has the lowest number of cases, launched screening buses to transport people to free screening centers.

Three buses will facilitate the operations in the capital, Muscat.

Oman's Health Ministry said that 148 new cases were found during the last 24 hours, bringing the country's total to 3,721.

They include 33 Omani nationals and 115 foreigners, according to the ministry.

The ministry did not report any new deaths on Tuesday. The number of fatalities stands at 17.

All mosques in Iran will reopen on Tuesday as the government takes another step towards easing restrictions designed to contain the coronavirus, the official IRIB news agency reported.

The decision to reopen the mosques was made in consultation with the ministry of health, Mohammad Qomi, the director of the Islamic Development Organisation, said.

The move comes even though some parts of the country have seen a rise in infections.

Tasnim news agency reported on Sunday that a county in southwestern Iran had been placed under lockdown to prevent the spread of the virus.

The total number of diagnosed cases in the country has reached more than 110,000.

Iran, one of the countries in the Middle East hit hardest by the novel coronavirus, has begun easing restrictions on normal life in order to keep afloat its economy, already battered by US sanctions. Health officials have repeatedly warned, however, that easing restrictions could lead to a renewed spike in the number of infections.

These were the details of the news Coronavirus: Saudi Arabia's infected cases near 43,000 for this day. We hope that we have succeeded by giving you the full details and information. To follow all our news, you can subscribe to the alerts system or to one of our different systems to provide you with all that is new.