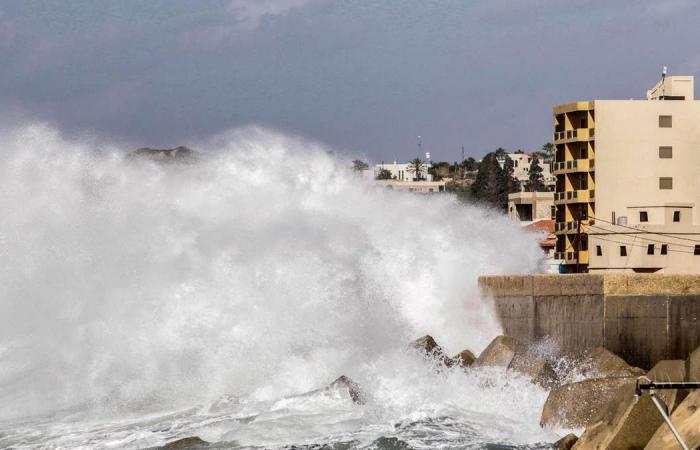 A participant dressed in a Christmas tree costume at the Tokyo Great Santa Run 2019 in Tokyo, Japan. EPA

A meerkat plays with a gift box that contains insects at the zoo in Cali, Colombia. EPA

Bolivians pose for a Christmas photo at the San Francisco square in La Paz, Bolivia.REUTERS

Christmas decorations are for sale at a shop on a street in Hanoi, Vietnam. EPA

Pakistan Christians celebrate ahead of the Christmas holiday in Lahore, Pakistan. AP Photo

A Palestinian shop displays Christmas gifts in the city of Bethlehem in the occupied West Bank. AFP

People walk between decorative items ahead of Christmas in Bhopal, India. EPA

Thai children and elephants dressed as Santa Claus attend Christmas celebrations at a school in the world heritage city of Ayutthaya, north of Bangkok, Thailand. EPA

A man dressed as Santa Claus rides a motorbike ahead of Christmas celebrations in Rome, Italy. REUTERS

A paraglider wearing a Santa Claus costume lands near the village of Akunq, some 15 kilometres outside of Yerevan. AFP

An actor performs near Red Square decorated for the New Year and Christmas holidays in the center of Moscow, Russia. EPA

Hundreds people participate in a show of lanterns and candles at the Matadero in Madrid, Spain during the Colombian 'Night of the Little Candles', a religious celebration to prepare Christmas eve praying, singing Christmas carols, and sharing Colombian typical sweets. EPA

Visitors pose for a photos with a light installation, part of Christmas festivities at Gardens By The Bay in Singapore. Getty Images

People are seen on a pier in front of a giant illuminated Christmas ball in Larnaca, Cyprus. REUTERS

Children sing Christmas carols at the Syriac Orthodox Church of the Virgin Mary in Qamishli in northeastern Syria. AFP

A member of Korean Federation for Environmental Movement in a Santa Claus outfit attaches dumped cigarette butts at a cigarette butt Christmas tree in front of Korea Tobacco & Ginseng Corporation office in Seoul, South Korea. The environmental activist group called for a ban on the use of plastic for cigarette filters as part of efforts to protect the environment from toxic plastic pollution. AP Photo

Guatemalan municipal firefighter Hector Chacon, dressed as Santa Claus, goes down a cable from a bridge to deliver presents to children in Guatemala City. AFP

Guatemalan municipal firefighter Hector Chacon, dressed as Santa Claus, arrives to deliver presents to children after going down a cable from a bridge in Guatemala City. AFP

A boy poses for his mother at the Christmas fair near the Arch of the Triumph in Chisinau, Moldova. EPA

Visitors look at the National Christmas Tree with the Washington Monument in the background on the Ellipse near the White House, in Washington. AP Photo

A student waits as she take part in a visit with a troupe of elephants (unseen) to distribute Christmas presents to students in a school at the historical city of Ayutthaya, Thailand. REUTERS

Tortoises are given their presents by Reptile keeper Daniel Saliba at the Adelaide Zoo in Adelaide, Australia. EPA

These were the details of the news Lebanon set for white Christmas with winter storm bringing snow for this day. We hope that we have succeeded by giving you the full details and information. To follow all our news, you can subscribe to the alerts system or to one of our different systems to provide you with all that is new.

PREV The damn evidence that brought Crown Resorts to its knees
NEXT Taoiseach warns of bumpy roads as 859 cases and four deaths...