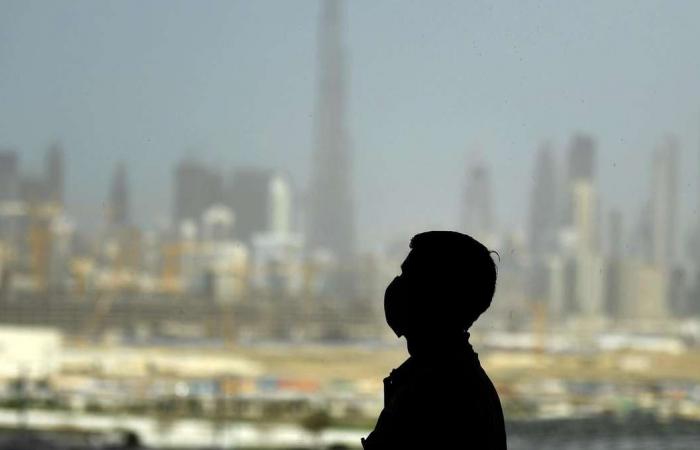 Thank you for your reading and interest in the news 100 days of coronavirus: how Covid-19 spread through the Gulf and now with details

Hind Al Soulia - Riyadh - In the past 100 days, the coronavirus pandemic has spread from China to nearly every country on the planet.

Amid this global health crisis, The National has examined the first 100 cases of Covid-19 in each Gulf country to trace how the disease spread through the region.

Using data provided by health ministries across the Gulf, we were able to trace the first patient and show the ripple effect as the virus spread through communities.

Covid-19 was discovered in the Chinese city of Wuhan in late December and within a month it reached the UAE.

Four members of a family tested positive while visiting the UAE from Wuhan during the Chinese New Year’s holiday, with the cases confirmed by the Ministry of Health and Prevention on January 29.

However, the UAE is the outlier in the data provided and patient zero in every other GCC country was a traveller returning from Iran.

With 62,500 infections, Iran is the centre of the Middle East’s outbreak.

About 3,800 patients have died in the country after contracting the virus.

The early data available for each country in the Gulf show more travellers returned from Iran with the virus than anywhere else.

In both Kuwait and Bahrain, travellers from Iran account for the overwhelming majority of infections, with about 80 per cent of their first 100 cases having arrived from the country.

In Kuwait, the first infected travellers made the journey from Mashhad, Tehran and Qom, with the virus first identified by the Kuwaiti authorities on February 24.

But travellers from Iran continued to arrive in Kuwait. Two weeks later, the government determined the virus spread to four people who had not recently travelled to Iran.

The infections marked the moment the virus was no longer simply coming from overseas.

Bahrain found itself in a similar situation as Iranian travellers and pilgrims brought in 76 of the country’s first 100 cases.

Iran has faced accusations that not only did it fail to recognise the virus or try to contain it adequately, but by not stamping the passports of GCC visitors transiting through the country, airport officials had no knowledge passengers were returning from a country where there was an outbreak.

When Covid-19 was still contained to Asia, Iranian healthcare professionals warned Tehran of the threat an outbreak could pose.

But the Iranian government still held a large public celebration of the anniversary of the Iranian revolution on February 11 and eight days later it reported its first cases.

Two days after that, Iran held an election that brought many citizens into close contact with one another.

“They just systematically disregarded all of the measures and policy initiatives that the health ministry was suggesting,” Ali Alfoneh, a senior fellow at the Arab Gulf States Institute in Washington, told The National.

The country’s civil aviation organisation promised to test travellers, but airport screenings can be ineffective in finding patients that in some cases do not present symptoms.

Governments have tried various measures to contain the virus.

Our investigation into the first 100 cases highlights how countries with effective tracking and tracing of cases may have helped slow the rate of infection.

The country with the lowest rate of contact transmission is Bahrain, where only six people in the first 100 cases were infected locally by previously confirmed cases.

Bahrain earned praise from the World Health Organisation for a rapid response to the outbreak and for its effective tracking and tracing programme.

“I’m impressed that after I identified some of the weak links in the chain of control for them, they immediately responded to deal with them,” Prof Ashton said.

He pointed out the main challenge Bahrain faced was the number of religious tourists who travelled to Iran to visit holy sites.

Of the country’s total case count, Bahrain has reported that 68 per cent of their cases were detected among travellers returning from Iran.

Prof Ashton described large quarantine facilities built rapidly to isolate those returning and prevent them from passing on the infection.

At the other end of the spectrum, Qatar had the highest number of local contact transmissions in its first 100 cases.

On March 8, three residents in the country tested positive, but three days later, the government announced those people had infected 238 others.

One of the greatest threats of coronavirus is the widespread contagion that can result from a single infected person.

The first cases in Saudi Arabia were also travellers returning from Iran, and one from Iraq.

The bulk of the kingdom's first 11 cases, the Saudi Press Agency reported, were in the eastern Qatif province.

The largely Shiite district was closed off by the government on March 8 in a bid to stop the virus reaching the rest of the kingdom.

But the virus spread through Jeddah.

Thermal cameras detected an Egyptian man with a high temperature as he arrived in the Red Sea city for a layover in a journey from New York City to Cairo.

The man was transferred to hospital and his infection was confirmed.

However, he still managed to infect 32 people, all of whom were then quarantined in Makkah.

Similar contact transmissions can be found in every Gulf country.

In Oman, where 20 of the first 100 cases were travellers from Iran, three weeks passed before a confirmed case transmitted the virus to another person.

In Kuwait, two people who travelled to Azerbaijan went on to infect nine others.

In the UAE, two Italians who travelled to the country for an international cycling event infected eight other people, of six nationalities, involved in the tour.

The WHO said even though the virus was predominantly spread by those with symptoms, people without symptoms can still infect others.

Dr Maria Van Kerkhove, the head of the WHO’s emerging diseases unit, said that globally there were still “large numbers of unrecognised transmission".

Cases continue to rise in the GCC but data prove early detection and prevention measures can make a drastic difference in how the virus spreads through a country and how tactics such as social distancing can aid in its decline.

These were the details of the news 100 days of coronavirus: how Covid-19 spread through the Gulf for this day. We hope that we have succeeded by giving you the full details and information. To follow all our news, you can subscribe to the alerts system or to one of our different systems to provide you with all that is new.