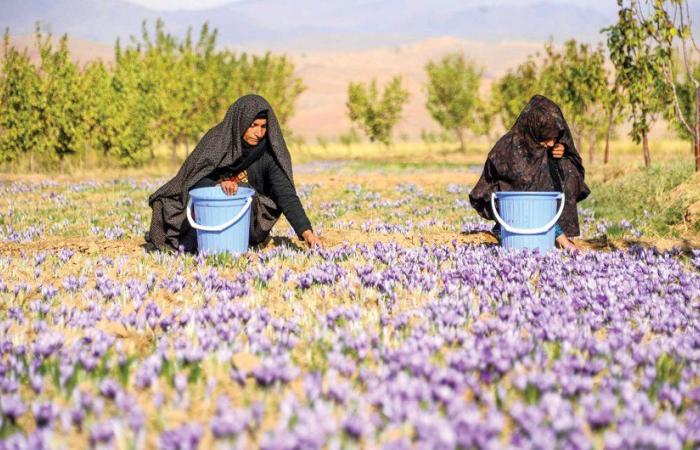 Jeddah - Yasmine El Tohamy - KABUL: For decades Afghanistan has earned worldwide notoriety for its production of drugs. However, in recent years, local farmers have turned to the cultivation of saffron, a far more lucrative crop that has been recognized as the best globally for eight successive years, officials said on Saturday.

The war-ravaged country last year produced more than eight metric tons of the plant, described by some analysts as “red gold.” One kilogram of saffron sells locally for at least $1,200 and in world markets it can even be traded for $4,000, officials said, while the price of opium can fetch far less, apart from being an illegitimate trade.

The saffron cultivated and produced in Afghanistan has been recognized as the best in the world in quality for the eighth consecutive year, a member of the Saffron Producers Union in Kabul told a news conference.

“Every year, there is an improvement in saffron cultivation and production, and this improves the quality of our saffron,” said Bashir Ahmad Rashidi, head of the union.

According to the union, the quality and taste of the Afghan saffron were evaluated at an institution in Belgium and the local saffron’s color and taste made it the best worldwide.

Iran and India have been among the top producers of saffron while Afghanistan with its 6.3 percent output holds third position, Akbar Rustami, spokesman for the ministry of agriculture, told Arab News.

“We are talking about tens of millions of dollars of income for farmers, growers and a big boost for the economy of the country,” he said.

Shafi Samim, an economic expert, said: “Afghanistan’s saffron has earned global fame, it is called “red gold” and has become one of the country’s top items of exports.”

He said that 23 out of 34 provinces in Afghanistan that had grown poppies, the raw material for opium and heroin, now cultivate saffron, with Herat being in the vanguard of production.

“More and more farmers now grow saffron, because its financially beneficial and is not haram like drugs.”

Hajji Ibrahim, a saffron dealer in Herat, said that people in some areas of only one of the 15 districts of Herat now grow opium while the rest cultivate saffron both because of its income and due to Islam, which has forbidden drugs.

“Saffron has given Afghanistan a good name in world markets; farmers in many parts of Afghanistan now have turned to it,” he told Arab News.

The private sector has played a major role in the production of the lucrative plant, which has found its way into markets such as Europe and Saudi Arabia, officials said.

Apart from its saffron, Afghanistan’s fruits and nuts, especially pine nuts, have in recent years made it to global markets, providing hundreds of millions of dollars for the country.

Last month it struck a deal with China to export thousands of pine nuts as part of a multibillion-dollar agreement.

These were the details of the news Afghanistan’s red gold ‘saffron’ termed world’s best for this day. We hope that we have succeeded by giving you the full details and information. To follow all our news, you can subscribe to the alerts system or to one of our different systems to provide you with all that is new.