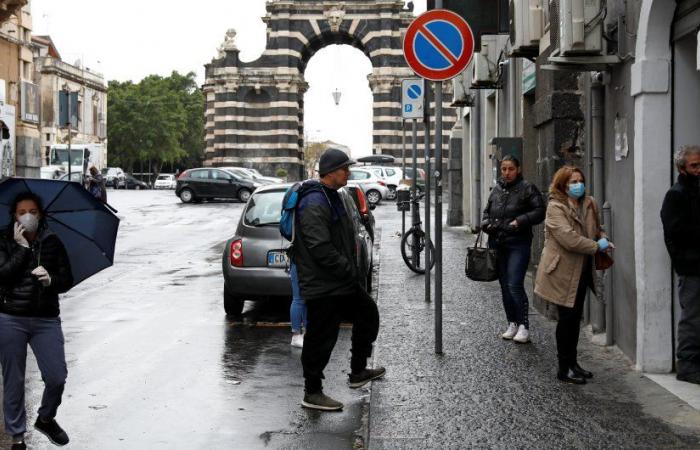 Jeddah - Yasmine El Tohamy - ROME: As Italy enters its fourth week under lockdown, tensions are building across the poorest southern regions of Campania, Calabria, Sicily and Puglia as people run out of food and money.

The number of checkpoints has increased nationwide to discourage people from going out. But instead of staying home as required by the government, there have been reports of shop owners being pressured to give food for free, and police are patrolling supermarkets in some areas to stop thefts.

Small but vocal crowds of unemployed have gathered in front of city halls in the south, calling for financial help to buy food.

“Give us something, it’s tough,” read a sign protesters held up in the city of Messina. Police dispersed the crowd and identified some of the demonstrators.

“They haven’t been working for weeks as everything has stopped because of coronavirus. Now they have no money left to buy food, and they don’t qualify for state aid,” said a policeman, adding that some of his colleagues gave demonstrators sandwiches and cigarettes to calm them down.

Similar scenes were witnessed in the Naples and Bari hinterland. Investigators are concerned that this could be a visible sign that the situation is heating up, and are afraid that the mafia might take advantage.

The self-employed, and those working on contracts that do not guarantee social benefits provided by the government to help face the crisis, have lost their salaries. Many small businesses may never reopen.

The ramifications of the lockdown, which has been extended until after Easter, are also hitting badly the estimated 3.3 million people in Italy who were working off the books, of whom more than 1 million live in Campania, Sicily, Puglia and Calabria, according to the most recent figures from CGIA Mestre, a Venice-based small business association.

“A significant number of people live day to day, doing occasional jobs,” Emanuele Fiano, chief whip of the Democratic Party in the Italian Parliament, told Arab News. “There are also many shopkeepers, or professionals working for themselves, who may have moderate reserves that will run out the longer they’re in lockdown.”

Caritas, a Roman Catholic charity operating nationwide, said requests for food at its soup kitchens have increased by 50 percent since the lockdown was enforced.

Amid the brewing social unrest, Prime Minister Giuseppe Conte said €4.3 billion ($4.7 billion) from a solidarity fund would immediately be advanced to all municipalities, and an additional €400 million would go to mayors for conversion into food stamps. Private donations to charities have also increased in recent days.

But mayors have said the funds provided by the government so far, especially the €400 million for food vouchers, are insufficient.

“It isn’t enough. We were expecting more, and I hope the government will find a way. The situation is extremely delicate as a significant part of the population in cities like mine have zero income,” said Messina Mayor Cateno de Luca.

“Those who previously managed in some way to live with dignity now find themselves in real difficulty. Those people need to eat even if they don’t do a job by the book.”

After weeks with nearly zero petty crime reported due to the lockdown, now local media have started to report an increase in robberies.

Two elderly people were robbed of their shopping by young people on scooters in separate incidents when they left a supermarket.

Police are trying to increase surveillance on supermarkets so that the elderly do not get targeted, but the situation does not seem to be improving.

“Today two guys came to me as I left the supermarket. They didn’t beg for money, but they asked me to hand them the two shopping bags I was carrying,” Lina di Marco, 60, a housewife from the city of Palermo, told Arab News.

“I saw their faces and didn’t dare say no. They looked desperate and quite ready to get my bags anyway,” she said. “What could I do? I just went back inside and bought something else for me.”

Giuseppe Provenzano, Italy’s minister for the southern regions, expressed concern about potential social tensions and civil unrest in poorer areas of the country if coronavirus spreads further in the south.

“I am afraid that the worries that are affecting large sections of the population over health, income and the future, with the continuation of the crisis, will turn into anger and hatred,” he told La Repubblica newspaper.

There are also clear signs that criminal organizations are exploiting the situation. Sicilian prosecutors are investigating the activities of a Facebook group called “National Revolution,” which has been inciting people to loot supermarkets.

Police are convinced that the people behind this group are those who, before the lockdown, made a living from house robberies and shop thefts.

With some of these criminal activities on standby due to the lockdown, the only shops open to rob are supermarkets and chemists.

Palermo Mayor Leoluca Orlando has asked the government to establish a “survival income” for the poorest citizens, due to fears that “criminal groups could promote violent acts.”

These were the details of the news Social unrest rising as Italy’s lockdown enters 4th week for this day. We hope that we have succeeded by giving you the full details and information. To follow all our news, you can subscribe to the alerts system or to one of our different systems to provide you with all that is new.