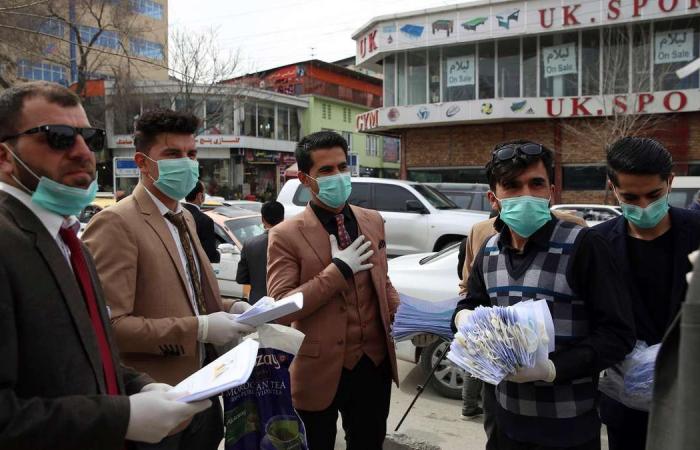 Hind Al Soulia - Riyadh - Fear of the coronavirus pandemic has moved Afghanistan's Taliban insurgents to voice concern about its spread in government prisons and to organise monitoring and awareness camps in areas under its control.

“There are about 40,000 people living in prisons run by the Kabul administration, where there are no hygiene or healthcare facilities, making it a serious threat. This virus can spread very easily in such conditions,” Taliban spokesperson Zabihullah Mujahid said in a statement issued on Sunday.

“If something goes wrong, it will be the responsibility of the Kabul government.”

Afghan had detected 21 cases of Covid-19 infections as of Monday, none of them fatal. The novel coronavirus has infected about 175,000 people worldwide and killed nearly 7,000.

The Taliban spokesman urged international organisations and agencies to help prevent an outbreak in prisons and also asked its jailed members to follow the World Health Organisation guidelines to prevent the spread of the virus.

The Taliban, who control about half of the country, had banned operations by the WHO and the Red Cross in April last year because of their “suspicious activities”. They later lifted the ban on the Red Cross but did not specify whether their “security guarantee” extended to the WHO.

Dr Waheedullah Mayar, a spokesman for Afghanistan's health ministry, said it was working to protect prisoners and Afghans across the country. “We even provide health services in insurgent-controlled areas to their children and women and we will continue to do so,” he said.

Underlining the challenges authorities face, at least 37 people suspected of being infected with the coronavirus broke out a government quarantine centre in Herat province on Monday.

“They broke the windows of the facility and beat up the doctors. The police also didn’t help us,” Dr Mayar said.

”We are calling upon elders, religious leaders, the media and public to help us implement healthcare policies and procedures in this time of crisis."

Concerns about the virus appear to have temporarily overshadowed the Taliban's dispute with the government over the release of 5,000 of its members – part of a peace deal agreed between the United States and the insurgents and a condition for the start of direct talks with Kabul.

A Taliban commander the northern province of Samangam told The National that the leadership of the insurgency were very concerned about the pandemic.

“The Taliban are very serious about this sickness and our fighters are co-operating with public health centres and assisting doctors,” said the commander, who asked not to be identified.

“We are asking all returning refugees and those coming from outside the country to get themselves checked. There was one suspicious case here and we made him get checked for the coronavirus. Thankfully, he tested negative,” he said.

In the northern Balkh province, the Taliban “arrested” a runaway patient who tested positive for coronavirus and handed him back to health authorities, according to their spokesman.

Ahmad Khalid, 35, a teacher from a northern area controlled by the Taliban, said the militants were trying to raise awareness about the threat.

“Yesterday the Taliban commanders held a gathering in our area to talk about the coronavirus, and asked elders to take precautions against its spread,” said Mr Khalid, who asked that his real name be withheld.

He said the health ministry was offering direct services in only three provinces – Panjshir, Parwan and Kapisa. "The rest is done through partner NGOs and private health workers who serve in government and insurgent-controlled areas. Taliban in those areas have been supportive of these health workers,” he said.

However, the coronavirus threat has not stopped the Taliban from continuing attacks.

“They are holding awareness gatherings to prevent the spread of coronavirus, but they are also fighting just like before, said Mr Khalid, the teacher.

"They attacked a police checkpost on Saturday and killed the police commander and injured another. Our situation has not changed.”

These were the details of the news Taliban sound alarm over coronavirus in Afghanistan for this day. We hope that we have succeeded by giving you the full details and information. To follow all our news, you can subscribe to the alerts system or to one of our different systems to provide you with all that is new.