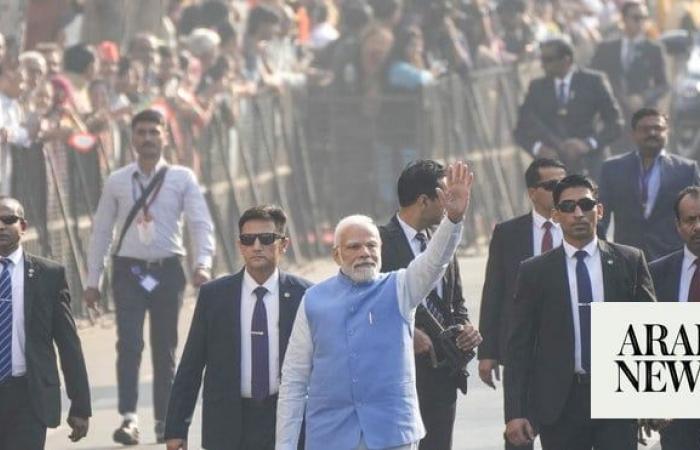 Jeddah - Yasmine El Tohamy - HONOLULU: About a week-and-a-half since the world’s largest volcano began erupting, Hawaii officials continue to brace for slow-moving lava to intersect with a crucial Big Island road, even though scientists are not sure when or even if that will happen.

On Wednesday morning, lava from Mauna Loa, which began erupting Nov. 27 after being quiet for 38 years, was 1.8 miles (2.89 kilometers) from Saddle Road, also known as Route 200 or Daniel K. Inouye Highway, scientists with the US Geological Survey said. The road connects the east and west sides of the vast island.

Last week, officials said the earliest the lava could hit the road was one week. But, as expected, the lava slowed considerably in recent days as it moved across flatter ground, leaving scientists unable to estimate a clearer timeline.

“I wish we could give a better answer,” David Phillips, deputy scientist-in-charge at USGS’s Hawaiian Volcano Observatory, said Wednesday. “And so just based on its current behavior and all the variables involved, it’s very difficult to estimate a time, a place or even an if, it would intersect the highway.”

The flow front seemed even less active Wednesday than the previous day, possibly because of a breakout of lava headed upslope that could be diverting lava from what’s headed to the highway, Phillips said.

Scientists were monitoring the overflow about 2.5 miles (4 kilometers) upslope from the lava front but it wasn’t currently posing any threat, Phillips said. It was unclear if it would continue to be active, but if does, it would be a while before it reached the road, he said.

Roth warned that the road could even close before the lava arrives if some lava-gawkers continue behaving badly, including people hiking onto closed areas to get a closer glimpse.

Thousands of motorists driving along the road to watch the lava prompted officials to open a one-way “mitigation route” last week.

The route seems to have helped reduce collisions that were happening at night when lava-viewing traffic increased, officials said.

About 20 members of the National Guard were dispatched to help with managing lava-related issues, including safety and traffic. The county also hired some security guards to help keep people from going into prohibited areas, Roth said.

“As we’re looking at this lava flow, you know, the concern hasn’t been so much for people getting hurt by lava,” Roth said Tuesday, “it’s people getting seriously injured by traffic crashes.”

These were the details of the news Narendra Modi’s party set for landslide election win in India’s Gujarat state for this day. We hope that we have succeeded by giving you the full details and information. To follow all our news, you can subscribe to the alerts system or to one of our different systems to provide you with all that is new.