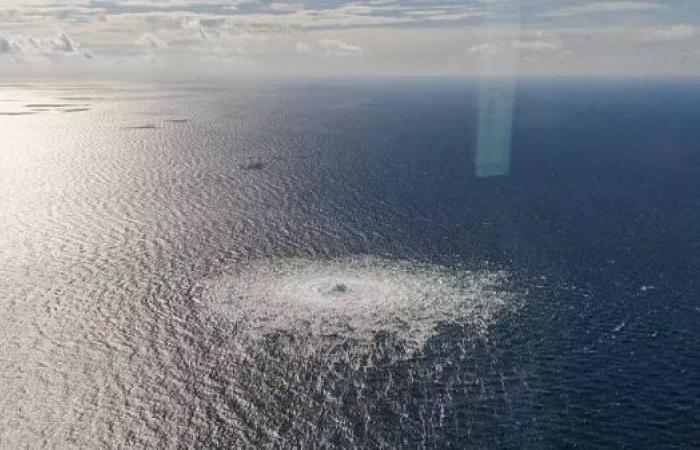 Two underwater pipelines running from Russia to Germany were damaged this week, with explosions apparently recorded in the Baltic Sea beforehand.

While the EU and US have stopped short of directly accusing Russia, a Kremlin official was rebuked after hinting that Washington was responsible.

"[President Joe] Biden is obliged to answer the question of whether the US carried out its threat," Russia's foreign ministry spokeswoman Maria Zakharova said on social media.

Washington dismissed the suggestion, with a spokeswoman for the National Security Council saying: "We all know Russia has a long history of spreading disinformation and is doing it again here."

US Secretary of State Antony Blinken said it would be in "no-one's interest" if the leaks were caused deliberately.

Europe's leaders have identified sabotage as the cause of the Nord Stream leaks close to Sweden and Denmark's territorial waters.

“All available information indicates those leaks are the result of a deliberate act,” EU foreign policy chief Josep Borrell said in a statement on behalf of the bloc's 27 members.

Polish Foreign Minister Zbigniew Rau was more direct. He suggested on Tuesday the leaks could be part of Russia’s campaign to apply pressure on the West for supporting Ukraine.

“The explosions took place very close to Danish territorial waters, but not inside them, because that would have meant NATO territory,” Rau said during a discussion at the Center for Strategic and International Studies in Washington.

Kremlin spokesman Dmitry Peskov said allegations that Russia would have sabotaged its own pipelines were “predictable and stupid.”

Two leaks were discovered on Monday on Nord Stream 1, which Moscow shut down earlier this month in retaliation for Western sanctions over Russia's war in Ukraine.

Another leak was discovered on Tuesday on Nord Stream 2, which was frozen following Russia's invasion of Ukraine and has never been operational.

While the pipelines were not operational during the alleged sabotage, they still contained natural gas.

The incident has raised fears of an environmental disaster.

Methane leaking from the damaged Nord Stream pipelines is likely to be the biggest burst of the potent greenhouse gas on record, according to experts.

The Associated Press, citing two climate scientists, reported that an equivalent of roughly half a million metric tons of methane could be released.

“Whoever ordered this should be prosecuted for war crimes and go to jail," said Rob Jackson, a Stanford University climate scientist.

Norway -- an oil-rich nation and Europe's biggest supplier of gas -- will strengthen security at its land and offshore installations, the country's energy minister said.

"The PSA has received a number of warnings/notifications from operator companies on the Norwegian Continental Shelf concerning the observation of unidentified drones/aircraft close to offshore facilities" the agency said in a statement.

Meanwhile, Denmark will increase security across its energy sector after the Nord Stream incident, a spokesperson for gas transmission operator Energinet told Upstream.

The Danish Maritime Agency has also imposed an exclusion zone for five nautical miles around the leaks, warning ships of the danger they could lose buoyancy, and stating there is a risk of the escaping gas igniting "above the water and in the air." — Euronews

These were the details of the news Russia and West trade blame over alleged sabotage of undersea gas pipelines for this day. We hope that we have succeeded by giving you the full details and information. To follow all our news, you can subscribe to the alerts system or to one of our different systems to provide you with all that is new.