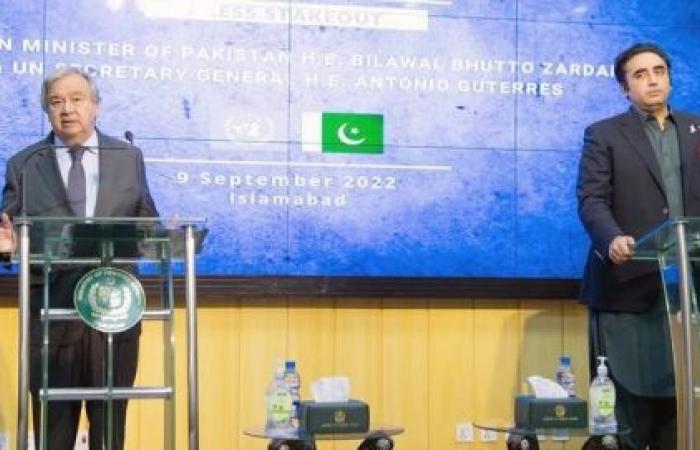 We show you our most important and recent visitors news details In flood-hit Pakistan, Guterres appeals for ‘massive’ global support, tougher action on climate change in the following article

Hind Al Soulia - Riyadh - ISLAMABAD — UN Secretary-General António Guterres arrived in Pakistan on Friday to show solidarity with the people of the country following the destruction caused by this year’s devastating floods. He appealed for massive international support to bolster the response and tackle this “climate catastrophe”.

Pakistan has been inundated with near continuous monsoon rainfall, flash flooding, and rain-induced landslides since mid-June, causing widespread devastation and casualties affecting millions of people across the South Asian country.

Upon his arrival, Guterres was briefed on the latest developments and the Pakistan-led response by Prime Minister Shehbaz Sharif and Foreign Minister Bilawal Bhutto Zardari, as well as other senior members of the government.

His two-day visit to the country is not only about solidarity, as he stressed during his various meetings today, “it is [also] a matter of justice”.

“My heart goes out to everyone who has lost loved ones in this tragedy, and all those who have been affected by the loss of their homes, their businesses and their livelihoods” he told journalists in Pakistan’s capital, Islamabad, in a joint press conference alongside Minister of Foreign Affairs Zardari.

‘A terrifying wall of water’

“[We] have all seen media images of the extraordinary destruction. I can only imagine the power and ferocity of the water as it bore down on villages, roads, bridges and everything else in its path. It was clearly terrifying — a wall of water,” Guterres said.

He added: “No country deserves this fate, but particularly not countries like Pakistan that have done almost nothing to contribute to global warming.”

Indeed, the UN chief stressed that Pakistan and other developing countries — from the Horn of Africa to the Sahel — are paying a horrific price for the intransigence of big emitters that continue to bet on fossil fuels, in the face of science, common sense and basic human decency.

Even today, emissions are rising as people die in floods and famines. “This is insanity,” stated the Secretary-General. “This is collective suicide,” he added, calling for an end to the “war with nature” and urging more investment in renewable energy.

Message to the Pakistani people, and the world

Earlier in the day, Guterres met with Prime Minister Shehbaz Sharif, and the two officials visited the National Flood Response and Coordination Centre (NFRCC), established by the Prime Minister on Sept. 1 to synergize the national response to the ongoing floods.

At the Centre, Guterres, the Pakistan officials and other in attendance viewed a short video that vividly depicted the scale of devastation wrought by the floods have thus far. Some of the footage showed cars and buildings being swept away by the massive floods. The video also portrayed the heartbreaking situation of women, children and men that have been displaced.

Speaking directly to the Pakistan people from a podium set up at the Centre: the UN chief said: “I’ve always witnessed your enormous generosity receiving ... Afghan refugees, protecting and assisting them. I’ve seen your generosity, helping each other, helping family, helping communities... And so, I know what it means for the Pakistani people, this unprecedented natural disaster.”

The Secretary-General stressed that he had also seen “the enormous effort of response from civil servants, the Government, from the Army, from the NGOs, from the population in an extraordinary demonstration of solidarity within the borders of Pakistan.”

‘Nature is striking back’

Speaking next directly to the international community, Mr. Guterres said: “Pakistan needs massive financial support to respond to this crisis that have costed, according to some estimates that I’ve heard today, about $30 billion and counting.”

He stressed that it is essential that this is recognized by the international community especially by those countries that have contributed more to climate change. He urged that “effective solidarity and effective justice” be shown by mobilizing massive support for relief, rehabilitation and reconstruction.

He warned that “we are heading into a disaster...we have waged war on nature, and nature is striking back, and striking back in a devastating way.”

Government ‘working together’ at all levels

“It is a matter of great encouragement you brought with you” the Prime Minister told Guterres at the NFRCC.

He reiterated that the government of Pakistan, along with provincial governments and all of stakeholders including the armed forces, are all working together to provide relief and help rescue to millions of people in need.

According to the government, some 33 million people are absolutely in dire conditions. “As we speak, people are being removed to safe places, food and shelter being offered,” said Prime Minister Sharif.

Scale of needs is enormous

“As you stand here today, a third of my country’s landmass is underwater,” Foreign Minister Zardari said. “Our people have lost their lives, their livelihoods, they are facing a very real threat of hunger, disease, and further devastation.”

The government is also considering all the work to be done after the waters recede, such as rebuilding houses and schools and infrastructure. “We know that we cannot do this alone, but we will do this together.”

He affirmed confidence in the United Nations, and in their international partners who “will not leave us in our difficult times, and we will build Pakistan back and build back better.”

Guterres reminded the world that the level of emissions of Pakistan is relatively low, “but Pakistan is one of the most dramatically impacted countries by the climate change” calling the floods a product of “the intensification of climate change”

Pakistan is consistently ranked among the 10 most vulnerable countries to the effects of global climate change, with impacts largely felt along the Indus River’s massive and regionally vital irrigation system.

Having already seen an average temperature increase of 1 degree Celsius over the last century and witnessing highly erratic and extreme weather events over the last decade, Pakistan’s vulnerability to the climate challenge is expected to become more severe in the future.

The Secretary General warned that loss and damage from the climate crisis is not a future event, “it is happening now, all around us,” and he urged governments to address this issue at COP 27 with the seriousness it deserves.

Joined by Under-Secretary-General for Humanitarian Affairs Martin Griffiths, and Resident Coordinator, Julien Harneis, Guterres began his first day in Islamabad meeting the UN country team in Pakistan. He was briefed by UN agencies regarding the response in the country, and their needs.

On Saturday, the UN chief will see the impact of the floods in different areas of the country, as some regions have experienced their wettest August on record. Rainfall in some provinces was up to eight times higher than usual.

He pointed out that the United Nations is on the ground to support the Pakistani government’s relief efforts.

“We and civil society are making good use of the funds released from the UN’s Central Emergency Response Fund (CERF),” Guterres confirmed, adding that the United Nations is stepping up efforts with the use of an air bridge from Dubai.

“Our people have delivered food or cash assistance to hundreds of thousands of people in Balochistan and Sindh, tons of emergency supplies to support children and women,” he said. “But what we have done is a drop in the ocean of the needs of the Pakistani people.”

Hundreds of thousands of displaced people are living in camps, and many more — six million as far as he knew — are with host communities.

The Secretary-General is leaving vibrant Islamabad and heading to the south, where tomorrow he will see first-hand the damage caused by the floods. He is also expected to meet with displaced people and first responders, as well as women health workers and nurses. — UN News

These were the details of the news In flood-hit Pakistan, Guterres appeals for ‘massive’ global support, tougher action on climate change for this day. We hope that we have succeeded by giving you the full details and information. To follow all our news, you can subscribe to the alerts system or to one of our different systems to provide you with all that is new.