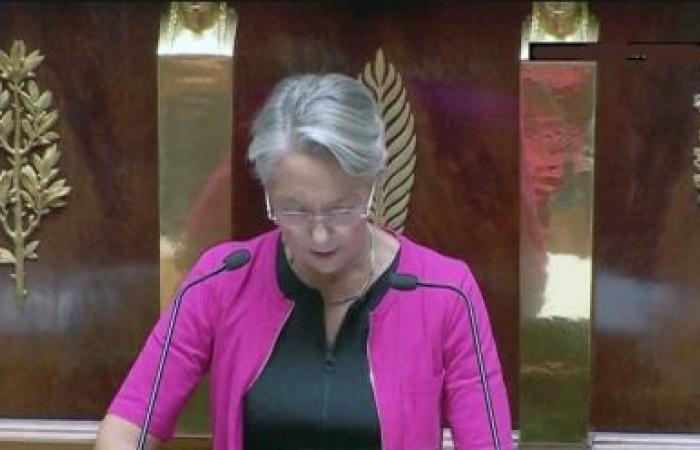 Hind Al Soulia - Riyadh - PARIS — Inside France’s National Assembly, the atmosphere was electric on Wednesday for the first speech by Prime Minister Elisabeth Borne as the ruling party no longer holds an absolute majority — a rarity in the country.

Such "general political declarations", taking place when a new government is formed to allow the prime minister to set out the executive's plans and priorities, tend not to be exceptional but this one was highly anticipated by politicians and political analysts alike as a first test for President Emmanuel Macron’s new administration.

And what a test that was... during the almost 90 minutes of speech, MPs shouted back, banged on tribunes and even booed the new prime minister.

Borne attempted to address some of what the administration of Emmanuel Macron believes are France’s most pressing challenges including the economy, gender equality, national security but also climate change, and peace in Europe.

She spoke about reforming France’s pension system, stressing that "we will have to work a little longer", making it a country "independent from fossil fuels", and about nationalizing electric utility company Electricite de France (EDF) in the name of "energy sovereignty".

But her main message was one of compromise. She asked for "more talks" and for MPs to "work together" in view of building a new model capable of addressing the multiple challenges ahead.

Macron's Renaissance party and its centrist allies lost their absolute majority in parliamentary elections last month to the benefit of the far-left La France Insoumise and the far-right National Rally parties which both made significant gains.

This means that contrary to the previous first years when the ruling party's comfortable majority enabled it to rubber-stamp Macron's reforms, the government will now have to seek alliances on a legislation by legislation basis.

Ahead of the speech, Elisabeth Borne’s team said she was "working round the clock: meeting everyone, calling everyone". According to her advisors, "she was really committed to listening".

During the speech, she made reference to these meetings with the leaders of the various parliamentary groups, citing MPs who talked to her by name, in an attempt to engage with them. But that didn’t seem to work.

Borne didn’t seem in a position of strength ahead of the speech. She didn't seem to have secured a stronger footing when she left.

She decided not to call a confidence vote on her policy speech — something of a rule for prime ministers in their first appearances in parliament.

Political analysts said she had no choice. Opposition leaders, including the head of the National Rally, said she probably did the right thing because "they don’t trust her government".

Without formal allies in the 577-seat national assembly, Borne invited members of parliament to honor what she said was French voters’ message last month when they dealt the president a major blow by forcing him to contend with a minority government

“The French asked us to talk to each other more and better. We must give meaning to the word compromise, too often forgotten in our political life," Borne said.

If the session itself is anything to go by, it didn’t look like MPs were ready to listen to the new prime minister. — Euronews

These were the details of the news Divided French parliament gives new PM tough time during first address for this day. We hope that we have succeeded by giving you the full details and information. To follow all our news, you can subscribe to the alerts system or to one of our different systems to provide you with all that is new.