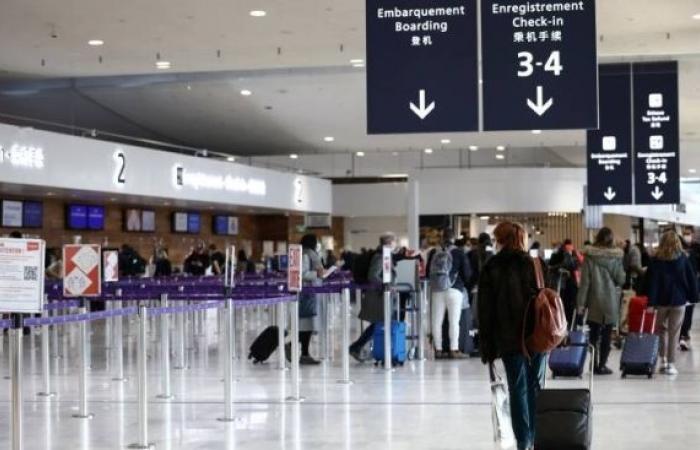 Scores of ground staff protested in front of one terminal to demand a big pay rise to cushion the pain of high inflation, emboldened by booming demand for air travel and staff shortages caused in part by the COVID-19 pandemic.

Airport operator ADP told Reuters it expected 100 flights to be cancelled, 50 incoming and 50 departing, over the course of the day.

Queues built up inside the terminals as some passengers sought to make alternative arrangements and others arrived early fearing disruption.

"We've been here since 3 o'clock this morning and we're still waiting. This is not going well at all," Philippine Tournier, who had booked a flight for Cancun, Mexico, told Reuters.

Scandinavian airline SAS and its pilots were in last-ditch talks on Friday to avert a strike from midnight that would paralyse much of the troubled carrier's operations.

After the COVID crisis battered the travel industry, ADP and its unions last year signed a deal entailing lower wages. But workers say the economic picture has changed.

Unions are demanding a net 300 euro increase per month on salaries, an amount the companies involved had rejected.

The strikes will continue on Saturday when one flight in five will be cancelled between 0500 GMT and 1200 GMT.

In a first step towards an agreement and potentially setting the bar for other wage talks in the sector, ADP this week had proposed a 4% pay rise, said Daniel Bertone, who represents the CGT union at the negotiating table.

"This is not at the level of today's inflation, but it's notable progress", he added in a hint that a deal could be reached based on that proposal. Regardless of which measure of inflation he was referring to, 4% is well below both the EU harmonised rate of 6.5% and the non-harmonised 5.8%.

However, the ADP directly only employs a minority of Charles de Gaulle ground personnel, the majority of whom holds labour contracts with airlines and a large number of sub-contractors. — Agencies

These were the details of the news Airport workers strike ground some flights in Paris for this day. We hope that we have succeeded by giving you the full details and information. To follow all our news, you can subscribe to the alerts system or to one of our different systems to provide you with all that is new.