How can the class of 2022 prevent climate ‘havoc’? Be part of the solution, says UN chief 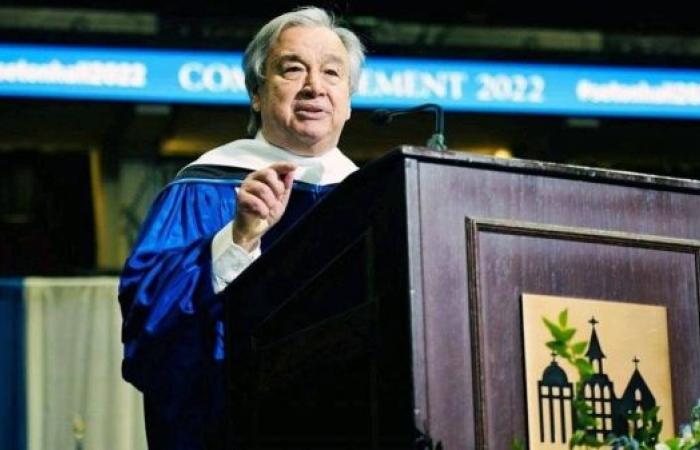 We show you our most important and recent visitors news details How can the class of 2022 prevent climate ‘havoc’? Be part of the solution, says UN chief in the following article

Hind Al Soulia - Riyadh - NEW JERSEY — The Class of 2022 is graduating with an urgent message: “Don’t work for climate wreckers.”

These were the words UN chief António Guterres spoke to students at America’s Seton Hall University Tuesday. And while the Secretary-General’s remarks were tailored to the institution where he was also collecting an honorary degree, they were addressed to a generation of graduates around the world.

Guterres used his commencement speech to guide young people toward being part of climate solutions rather than problems.

“You must be the generation that succeeds in addressing the planetary emergency of climate change,” he told students assembled at the Prudential Center in Newark.

“My message to you is simple: Don’t work for climate-wreckers. Use your talents to drive us towards a renewable future.”

The climate crisis was a prominent part of the graduation address, in which the UN chief described a world “brimming with peril.”

Russia’s invasion of Ukraine featured too, as the 73-year-old leader referred back to a major speech he made last week, outlining five actions the world can take to speed up the shift to renewable energy.

This is the ninth honorary degree the former Portuguese prime minister has received, after being made a Doctor of Law by Cambridge University last year. In recent years, he has used his speeches to sound ever-more urgent warnings about the state of global heating and ecological breakdown.

Guterres’s remarks were general, to suit a diverse range of specialists. But there was a clear note of warning regarding the finance sector.

“Despite mountains of evidence of looming climate catastrophe, we still see mountains of funding for coal and fossil fuels that are killing our planet,” the UN Secretary-General told students.

“That money continues to flow from some of the biggest names in finance, hedge funds and private equity.”

“But we know investing in fossil fuels is a dead end — economically and environmentally,” he added. “No amount of greenwashing or spin can change that. So we must put them on notice: Accountability is coming for those who liquidate our future.”

Guterres’ comments will have struck a chord for some graduates considering a career in financial services. Seton Hall University — one of the oldest Catholic institutions in the US — lists JP Morgan Chase, Prudential and the Bank of America as some of the ‘notable employers’ for its Class of 2021.

“As graduates, you hold the cards,” he continued. “Your talent is in demand from multinational companies and big financial institutions.”

Their paths may get more winding yet. Guterres shared that — despite graduating as an engineer over 40 years ago — he has never practiced engineering.

“What I ultimately took from my training went far beyond electronics or telecommunications.

The most important skills I gained from my education were “learning how to learn,” how to work with others, how to communicate ideas, and — above all — how to make a difference in the world,” he said.

The diplomat and politician said that today’s conflicts, and the “havoc” caused by the climate crisis cry out for international solutions.

“They demand that countries stand with one another within a strong multilateral system. Building a better, more peaceful future requires collaboration and trust, which are sorely lacking in today’s world.”

Encouraging graduates to keep these qualities alive, Guterres ended his speech on the University’s motto: ‘Whatever the peril, go forward.’ — Euronews

These were the details of the news How can the class of 2022 prevent climate ‘havoc’? Be part of the solution, says UN chief for this day. We hope that we have succeeded by giving you the full details and information. To follow all our news, you can subscribe to the alerts system or to one of our different systems to provide you with all that is new.