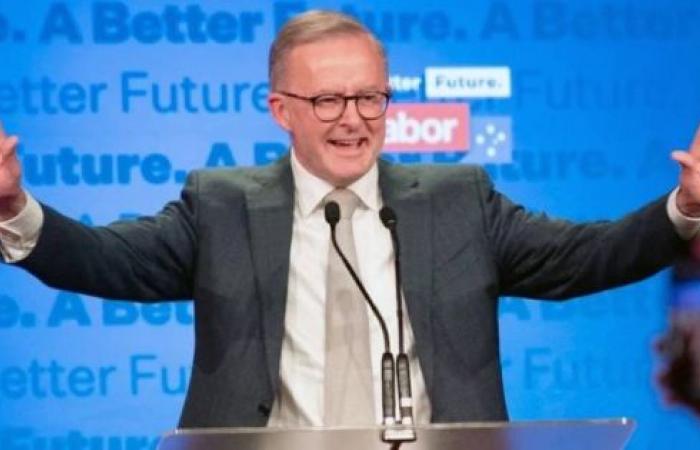 Albanese told jubilant supporters that Australians had "voted for change". However it is still unclear whether he can secure a majority.

The center-left leader vowed to bring people together, invest in social services and "end the climate wars".

Morrison thanked the "miracle of the Australian people" after conceding.

In perhaps the greatest twist, the election saw large support for Greens and independent candidates — many running on climate platforms.

They could wield greater influence if Labor fails to secure 76 lower house seats to govern in its own right. Late on Saturday it had 72 seats to the Liberal-National Coalition's 55, the ABC projected.

Albanese said it was an "extraordinary honor" to lead the country as he emerged to rapturous applause at Labor's victory party in Sydney.

"My Labor team will work every day to bring Australians together. And I will lead a government worthy of the people of Australia," he said.

Albanese, 59, began by acknowledging Aboriginal and Torres Strait Islander Australians, reiterating his commitment to hold a referendum on a Voice to Parliament — an Indigenous advisory body — during his three-year term.

He went on to refer to his own humble beginnings as the "son of a single mum who was a disability pensioner, who grew up in public housing".

After his speech, Albanese told the BBC's Shaimaa Khalil he strongly supported the Aukus defense alliance with the US and UK, and hoped to be a world leader on climate action.

One of Australia's longest-serving politicians, Albanese served briefly as deputy prime minister to Kevin Rudd in 2013 and has long been a favorite of his party's left wing. Since becoming opposition leader in 2019, he has positioned himself more towards the center.

Morrison had been expected to narrowly lose the election, but the result showed a collapse in his vote.

He shed crucial seats to so-called "teal" independents in traditional inner-city Liberal strongholds. They had campaigned on platforms of climate action and integrity in politics.

Morrison congratulated Albanese and said he would step down as Liberal leader after the defeat. He said it had been a "time of great upheaval".

"What Australians have endured over these past few years has shown a tremendous depth of character and resilience and strength," the outgoing prime minister said.

Morrison, 54, is the first prime minister to serve a full term in office since John Howard in 2007.

Former Defense Minister Peter Dutton is seen as favorite to take over as Liberal leader, after former Treasurer Josh Frydenberg appeared likely to lose his seat.

Voting is compulsory in Australia, and about 17 million people were expected to cast a ballot this time round.

The vote was for all MPs in the House of Representatives, and just over half the seats in the Senate.

Australian politics is traditionally dominated by Labor and the Liberal-National coalition. Either party needs to win at least 76 of the 151 seats in the House of Representatives — where the prime minister sits — to form a majority government.

If they cannot do that, they must try to win support from independent MPs, or those from minor parties. — BBC

These were the details of the news Albanese vows unity after Labor seizes power in Australia for this day. We hope that we have succeeded by giving you the full details and information. To follow all our news, you can subscribe to the alerts system or to one of our different systems to provide you with all that is new.