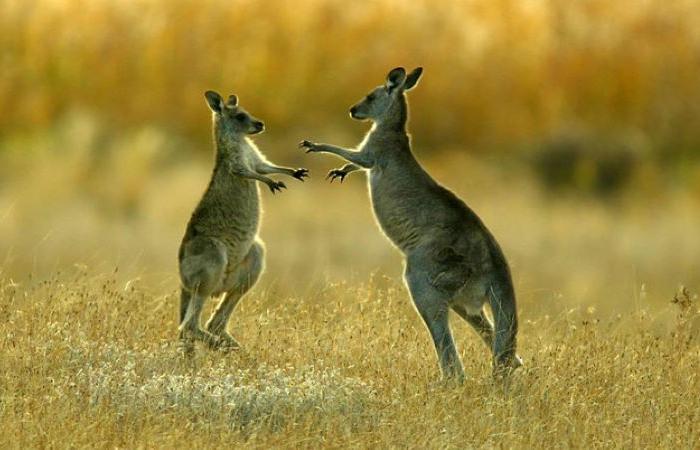 Jeddah - Yasmine El Tohamy - NEW DELHI: Villagers in West Bengal have since March reported seeing large animals with big feet leaping through forests. The locals say they have never spotted the creatures before.

The sightings drew national attention when wildlife officials in the Darjeeling and Jalpaiguri districts of the northeastern Indian state last month rescued three of the animals — that turned out to be kangaroos.

“We have initiated further investigation for ascertaining the whereabouts of these kangaroos — by whom and how they were brought into the forest along with finding the cause behind bringing them,” Belakoba forest range officer Sanjay Dutta told reporters at the time.

While the sightings are being probed, Wasim Akram, executive director of Wildlife SOS, a non-governmental organization rescuing and rehabilitating wildlife in India, said it was most likely the animals had been smuggled into the country. The marsupials are indigenous to Australia and New Guinea and have never lived in South Asia, except for zoos.

“We still don’t have conditions to be breeding this kind of species in India. The higher chances would be of trafficking because that is how we have been seeing it happening in the past,” he told Arab News.

But it is unclear if the kangaroos came from Oceania, as wildlife smuggling networks may span several continents.

“Earlier, we used to see a lot of cases of reptiles being trafficked into India but that would never be from the port of exit to the port of entry, there would be multiple entry points, so it would be very difficult to track the source of origin,” Akram added.

“It happens that a species may be native of Africa. They end up trafficking it first to a place like Indonesia, and from there they send it to India.”

Indian law provides little accountability for those who own exotic pets or are involved in their trade.

Although the South Asian nation has some of the world’s most stringent legislations to protect wildlife and habitats, it does not have any rules or penalties for trading and owning of non-native species, endangered or not.

“Indian law does not have provision for domestic transfer or breeding of exotic animals,” Debadityo Sinha from the Vidhi Center for Legal Policy, told Arab News. “There is a legal vacuum.”

An amnesty announced by the Ministry of Environment in 2020 showed how common such pets were in the country, when tens of thousands of Indians came forward to confess ownership of species from tortoises and pythons to lemurs and gibbons.

Abhijit Sarkhel, a wildlife activist from New Delhi, said the sighting of exotic species was nothing new, adding that kangaroos only drew attention because they were big and very visible.

“Lots of people keep smaller mammals as pets and it’s an unregulated area,” he said. “If a person cannot handle the pet and release them in the forest then it’s the responsibility of forest departments.”

The lack of responsibility for exotic pets and their sighting in places where they do not belong is just the tip of the iceberg of conservation problems. “It’s certainly an extreme form of cruelty,” Akram said, adding that non-native species may struggle to survive in a different climate.

One of the kangaroos intercepted by wildlife officials in Bengal last month died from dehydration and malnutrition the day after it was rescued.

“When you introduce a species which is not native to that area, it can be a threat to the native species,” Akram added. “You can end up introducing a new virus, new infection.”

Despite being a signatory to the Convention on International Trade in Endangered Species of Wild Fauna and Flora agreement since 1976, India is still to extend legal protection to many species listed in its appendices.

But works are in progress as last year Indian lawmakers began to draft legislation to amend the 1972 Wildlife (Protection) Act and close its loopholes.

“They are trying to regularize and regulate this particular field,” Akram said. “I won’t be surprised if a formal declaration is made very soon.”

These were the details of the news Kangaroo sightings put spotlight on India’s unregulated exotic wildlife trade for this day. We hope that we have succeeded by giving you the full details and information. To follow all our news, you can subscribe to the alerts system or to one of our different systems to provide you with all that is new.