Ukraine .. Blinken threatens from Kiev and Russia does not intend... 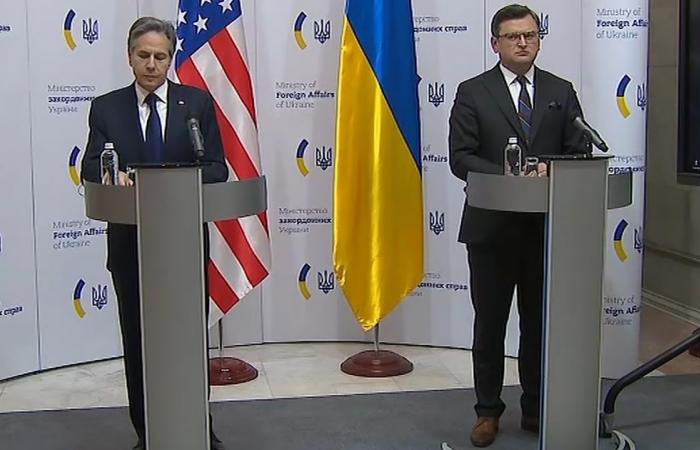 US Secretary of State Anthony Blinken threatened Russia with serious consequences if it invaded Ukraine, while Moscow said it had no intention of changing the status of its forces near the border with Ukraine, calling on Washington to abandon plans to send arms to Kiev.

In a press conference held by the US Secretary with his Ukrainian counterpart Dmytro Kuleba, Blinken accused Russia of seeking to undermine democracy in Ukraine, and stressed that Washington would continue its diplomatic efforts to prevent any Russian aggression against Ukraine.

He pointed out that the United States has provided Ukraine with defensive military aid during the past weeks, stressing that Washington will not provide a written response to the Russians’ demands during the negotiations between the two parties.

He affirmed Ukraine’s support for its territorial integrity and striving to strengthen its defense capabilities, noting that Russia’s use of its power with impunity could encourage any country in the world to violate international laws.

And Blinken began a European tour – including Ukraine and Germany – to discuss diplomatic efforts to calm the tension caused by the Russian military buildup on Ukraine’s borders.

Blinken met in Kiev with his Ukrainian counterpart and President Volodymyr Zelensky. Blinken said that his visit was in coordination with Kiev, prior to his meeting with his Russian counterpart in Geneva two days later.

Ukraine’s foreign minister denied that his country was planning offensive operations against Russia, and Kuleba said that the conflict in Ukraine had one solution, which is diplomacy.

Kuleba added that all our efforts today are aimed at ensuring that the situation in the country remains stable, noting that his country’s relationship with America is distinguished, and we cooperate in the military field, and this strengthens our defenses.

After Kiev, Blinken will move to Berlin to meet with the Quartet, which includes the United States, Britain, France and Germany. The group will discuss joint efforts to deter any Russian aggression against Ukraine, including imposing harsh sanctions on Russia.

A Foreign Ministry official also said that Blinken will meet his Russian counterpart, Sergey Lavrov, in Geneva on Friday.

The Russian Foreign Ministry stated that Lavrov assured his American counterpart the need for the United States to provide a written response to Russia’s security proposals as soon as possible.

According to the Russian Foreign Ministry, Lavrov urged Blinken to force Kiev to comply with the Minsk agreements.

A statement issued by the Russian Foreign Ministry said that Lavrov told Blinken that Moscow needed “specific responses to each individual article” of its proposals “as soon as possible,” and called on his American counterpart “to stop speculating about the imminence of alleged Russian aggression.”

Lavrov said earlier on Tuesday that there would be no further negotiations until the West provided adequate answers.

Peskov said that there is a continuous supply of weapons to Ukraine in conjunction with various military exercises, which leads to more tension, as he put it.

Peskov considered the upcoming meeting on Friday between Lavrov and Blinken in Vienna very important, explaining that the agenda of the talks between the two ministers is clear for Moscow.

Regarding the Turkish mediation proposal between Moscow and Kiev, Peskov said that Russia welcomes any country’s efforts to resolve the crisis in Ukraine, noting that the main dispute between Russia and Ukraine is Kiev’s obstruction of the implementation of the Minsk agreements.

Deputy Foreign Minister Sergei Ryabkov said Russia had no intention of making changes to the deployment of its forces near the border with Ukraine.

Ryabkov accused the United States and NATO of making baseless allegations against Russia. Ryabkov revealed that Russia prefers agreement on security guarantees in the first place, noting that Washington is trying to link the file of limiting medium and short-range missiles to the Ukrainian file.

Washington toughened its tone on Tuesday against Moscow, and the White House said Russia was ready for a possible attack on Ukraine that could happen “at any time”, warning that the US response would include all options.

In the context of US support for Ukraine, a senior US official revealed that the administration of US President Joe Biden has authorized the allocation of $200 million in additional defense and security assistance to Ukraine.

The United States had delivered $450 million in military aid to Ukraine before the Russian forces moved towards the Ukrainian border late last year.

These were the details of the news Ukraine .. Blinken threatens from Kiev and Russia does not intend... for this day. We hope that we have succeeded by giving you the full details and information. To follow all our news, you can subscribe to the alerts system or to one of our different systems to provide you with all that is new.