Lebanon is on a date with a severe storm… the temperature... 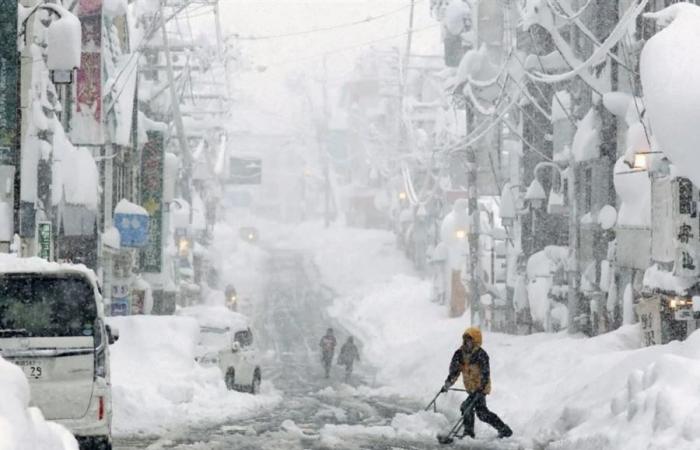 It seems that Lebanon is preparing to receive a snow storm that it has not witnessed in recent years, as confirmed by the expert on weather conditions, Father Elie Khneisser. In this context, Al-Diyar learned that the security forces and the Lebanese army announced the mobilization of their units to help the villages and towns most affected by the coming storm, as well as to help citizens and cars that might get stuck in the snow, especially in the hills and on crowded crossings such as Dahr al-Baydar. In the same context, the Civil Defense prepared its units in anticipation of any emergency or request for intervention by the municipalities.
Yesterday, the shops witnessed an attack by citizens to buy necessities and foodstuffs in anticipation of the storm, and the roads were deserted in the evening like cars, especially on the mountains, in anticipation of the snow that might form on the roads.
Father Elie Khneiser, a weather specialist, confirmed in a radio interview with the media, Mireille Mazraani, that “the echoes circulating about the snow storm are not under the pretext of intimidation and media amplification, but according to scientific facts and satellite maps.”
He stressed that “we are coming to a severe period that will extend until February 3 and 4, in which Lebanon will witness 3 successive snowstorms after entering 3 depressions carrying cold and icy polar masses.”
Khneisser pointed out that “the first air depression is highly effective, under the influence of cold polar masses from the North Pole, which Lebanon will witness, especially in the next two days, in all Lebanese regions.”
He said, “The depression will enter Lebanon this evening, to witness scattered rain on the coast, in addition to snow that touches 1,100 meters, especially in the Bekaa, as the night hours progress, after which sharp polar masses will enter, touching between 800 and 900 meters in the evening.”
As for Wednesday morning, Khneiser pointed out that “the polar front will enter the most severe and coldest, and its temperature will reach 7 degrees below zero on the 850 exospascal layer. Tomorrow, temperatures will continue to drop to touch the 500-meter snow, so that the patriarchal edifice in Bkerke and the outskirts of Harissa will wear white.”
As for the northern regions, Khneisser indicated that “the snow will touch a height of 300 meters, reaching a thickness of between 4 and 3 centimeters, and the temperature on the coast will be between 3 and 4 degrees at dawn on Thursday, and the snow will be distributed by 70% of all Lebanese territories.”
Khneisser stressed that “the storm will be very cold, and the accumulation of snow will start from Wednesday noon until Thursday morning, and it will touch the outskirts of the Lebanese coast, that is, at an altitude of 300 and 400 meters, so that the density of snow will be between 3 and 4 centimeters. As for the areas that are at an altitude between 500 and 700 meters, snow will accumulate at a rate of 10 to 15 centimeters, while areas between 900 and 1200 meters will see a thickness of 30 centimeters, and in areas that are between 1200 and 2000 meters, the thickness of snow will range between 35 and 50 centimeters. The Bekaa regions, from the far north to the extreme south and west, will be completely covered with snow, and its thickness will range between 15 and 25 centimeters.
As for temperatures:
Wednesday: It will decrease this afternoon to reach in the Bekaa areas between -4 and -6 degrees Celsius, while at an altitude of 100 meters it will range between -4 and -6 degrees Celsius.
As for the 600-meter altitude, the temperature will range between -1 and -2 degrees Celsius.
On the coast, it will range between -3 and -4 degrees Celsius.
And Thursday evening, temperatures will drop more and more, reaching between -6 and -12 degrees Celsius in the Bekaa regions.
As for areas at an altitude of 1000 meters, temperatures will range between -5 and -7 degrees Celsius
While areas at an altitude of 700 meters will record a temperature of -4 degrees Celsius.
But the remarkable thing is that the snow will not melt quickly due to the siege of the cold and icy masses in Lebanon, and the snow and icy layers will remain until Sunday.
It will not be the last snow storm, but Lebanon will wait for the arrival of another air depression, so that the rains will flood Lebanon into a shift on Sunday evening, with the temperatures dropping, as a snow storm will touch the snow at a height of 700 meters and will extend for up to 3 days.
The mountainous areas will witness accumulated snow accumulations, reaching the percentage of snow thickness in the snow centers between 3 and 4 meters to remain at the end of January or the beginning of February.
And this storm will not hold the conclusion, “the reasoning” of the “third proverb” is fixed, because Lebanon is on another date from the arrival of a third air depression at the beginning of February, and Lebanon will be under the influence of very cold polar blocs.

These were the details of the news Lebanon is on a date with a severe storm… the temperature... for this day. We hope that we have succeeded by giving you the full details and information. To follow all our news, you can subscribe to the alerts system or to one of our different systems to provide you with all that is new.