Hamas is producing a drama series that supports the Palestinian narrative... 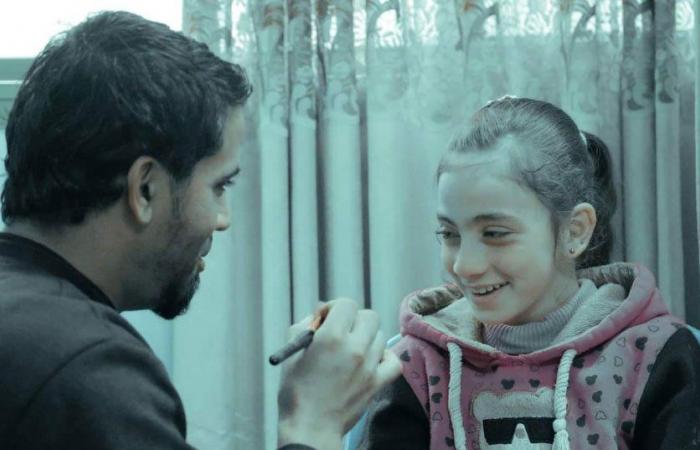 Gaza – AFP: A large picture of the founder of the World Zionist Organization, Theodore Herzl, documents in Hebrew and Israeli flags simulate an imagined scene for the office of the intelligence chief in the Hebrew state, on the site of the filming of a drama series produced by the Islamic movement Hamas in Gaza City, through which the Palestinian narrative of the conflict with Israel is presented.
Through the series “The Fist of the Free”, which is scheduled to be shown next Ramadan, Hamas seeks to respond to the Israeli series “Fauda”, which was watched by millions through the “Netflix” and “Apple TV” services, which showed the adventures of Israeli intelligence agents infiltrating Palestinian society.
On the Palestinian side, especially in the Gaza Strip, the Israeli series has met with widespread criticism, and many have included watching it in the context of normalization with Israel, according to the director of the artistic production unit in Hamas, Muhammad Soraya.

Soraya is supervising the first training of the staff in the new series. “Netflix supports the Zionist occupation through the production of many series, such as Fauda, ​​which criminalizes the Palestinian people,” he says, adding that “The Fist of the Free” aims to “show the Palestinian point of view, the Palestinian resistance and the human being, and broadcast a drama about the spirit of our people’s resistance.” He explains that the plot of the series focuses on “the superiority of the resistance intelligence.”
Three Palestinian writers participated in the work of “The Fist of the Free,” and were inspired by the story from an intelligence operation carried out by an Israeli special unit in 2018 in Khan Yunis in the southern Gaza Strip. At that time, the operation ended in an armed clash that resulted in the martyrdom of seven Hamas activists, including a field commander, and an Israeli officer was killed.
And participates in the series amateur local actors.
Soraya explains that “our financial and technical capabilities to produce drama in Gaza are very weak.”
This is reflected in the salaries of the actors and decorators of the series and the short time allotted to production. The Hamas movement, classified as “terrorist” by the European Union and the United States, established its own institution for drama production in 2007, months after it took control of the Gaza Strip, which has been besieged by Israel since then and in which 2.3 million Palestinians live.
In her first work, she produced a drama series dealing with the life of Imad Aqel, one of the founders of the Al-Qassam Brigades (the military arm of Hamas) and responsible for attacks in which Israelis were killed in the 1990s, before he was assassinated by Israel. The drama industry in the Gaza Strip flourished in the fifties of the last century, but it witnessed a decline in the last twenty years, which was reflected in the series, which cost 300 thousand dollars.
Soraya says that this cost is “lower” than the cost of one episode of an Egyptian or Turkish series.
And if the Israeli production employed Arabs from the Israeli Arab minority in its series, the Gaza production did not have any Israeli representative, and therefore, Palestinians embodied the roles of the Israelis in the series.
Jawad Harouda, 63, a retired Palestine TV employee, plays the role of head of the Israeli Shin Bet. He says with some pride, “I must play the role professionally and completely, and that the viewer will be convinced and believe me in the role of the Shin Bet man.”
As for the role of the officer “David” in the series, who is charged with collecting intelligence information on fighters in the Gaza Strip, it will be played by the 65-year-old actor, Zuhair Al-Balbisi, who has a degree from the Art Institute in Cairo.
In order to perfect his role in the series so that it appears closer to reality, Al-Balbisi was keen to meet a group of Palestinian prisoners who were recently released.
In one of the scenes, the officer, David and his force members are surprised to discover their order by Palestinian fighters before the two sides clash, and the dead and wounded are forced to leave the Gaza Strip.
Palestinian actors say that their portrayal of Israeli roles sometimes brings them criticism from the audience, which means, “I succeeded in my performance,” according to Belbeisi.

Not far from the filming location and in a summer house near the seashore in southwest Gaza, technicians are putting the final touches on a room that will be depicted as the operations room of the Israeli unit Ser Metkal that has secretly infiltrated the Strip.
Camelia Fadel, 40, is rehearsing for her role in the series as a gossip woman named Umm Tahseen, whose gossip is used by the Israelis to gather information about Palestinian fighters.
Soraya points out that the number of viewers of the series “Gate of Heaven”, which was broadcast by Al-Aqsa two years ago and talks about the “resistance” in the West Bank and Jerusalem, has reached “more than thirty million followers.”
“The Fist of the Free” will be broadcast on the “Al-Aqsa” satellite channel, owned by Hamas, for thirty days during Ramadan. Soraya indicates that the series will also be distributed “free of charge to Arab and foreign channels, including Turkish and Indonesian.”

These were the details of the news Hamas is producing a drama series that supports the Palestinian narrative... for this day. We hope that we have succeeded by giving you the full details and information. To follow all our news, you can subscribe to the alerts system or to one of our different systems to provide you with all that is new.