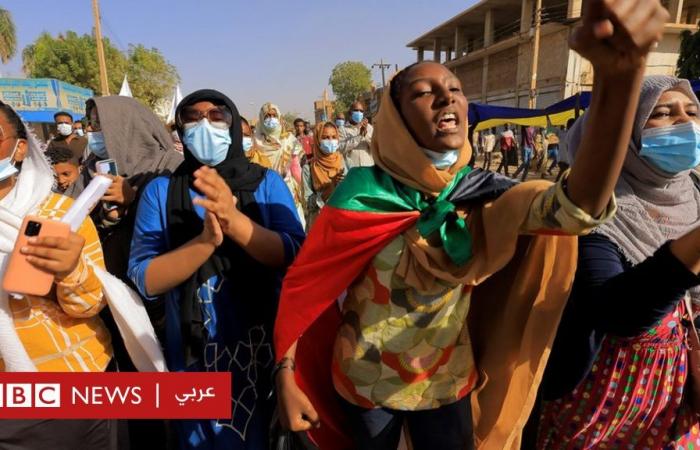 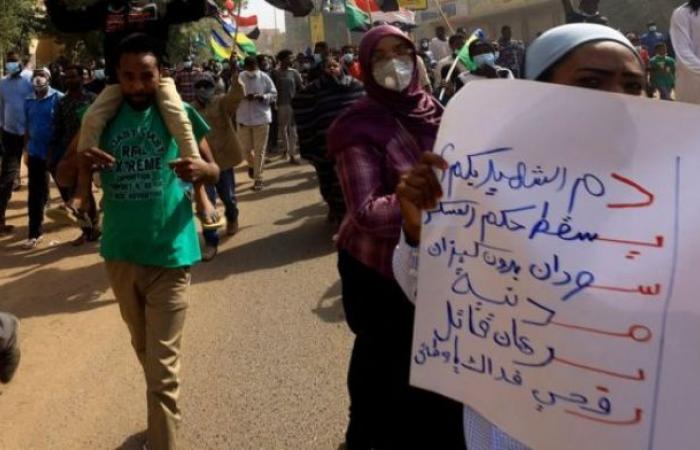 On Thursday, limited women’s demonstrations took place, at the invitation of women’s rights associations and the Sudanese Professionals Association, to denounce the incidents of rape and sexual violence that they say female demonstrators were subjected to during protest activities in front of the Republican Palace in Khartoum last Sunday.

Hundreds of Sudanese girls and women participated in marches on the streets of the cities of Omdurman, Khartoum North, and the “Al-Kalakla” area, holding banners to denounce the military coup and to demand accountability for those responsible for what they called individual and collective rape during the security forces’ dispersal of a demonstration in the vicinity of the Republican Palace in the capital.

“Rape will not stop us,” demonstrators chanted in protests in the capital, Khartoum, and its twin city, Omdurman. They added that “the women of Sudan are stronger.”

Several Western countries, including the United States and the European Union, issued a joint statement Thursday condemning the use of sexual violence as a “weapon to keep women away from demonstrations and silence their voices.”

The statement, also signed by Britain, Canada, Norway and Switzerland, called on Khartoum to “conduct a full and independent investigation”.

In an interview with the BBC, Salima Ishaq, head of the Unit for Combating Violence against Women affiliated with the Ministry of Social Development, said that the unit documented 8 cases of rape, including one with an official report, while the rest of the cases received medical assistance and psychological support.

The Human Rights Commission, which is affiliated with the Sudanese government, demanded the opening of an official investigation into allegations of sexual violence, and called on women who were subjected to violations to submit official reports so that the perpetrators would not go unpunished, according to the statement.

Sunday’s demonstration had attracted hundreds of thousands of demonstrators to the Sudanese capital, Khartoum, to protest against the military coup on October 25 and the November 21 agreement concluded by army chief Abdel Fattah Al-Burhan with Prime Minister Abdullah Hamdok.

Medics said that the demonstrations claimed the lives of two protesters.

What did the United Nations say?

A spokeswoman for the United Nations Human Rights Office referred to “alarming” reports of girls being subjected to sexual violence and harassment while fleeing the vicinity of the presidential palace in Khartoum.

Liz said Throssell، in a According to a press release, the bureau received 13 allegations of rape and gang rape, as well as reports of security forces sexually harassing women as they attempted to flee.

Throssell did not give details of the alleged rape or gang rape.

“We urge a prompt, independent and thorough investigation into allegations of rape and sexual harassment, as well as allegations of death and injury to protesters as a result of the unnecessary or disproportionate use of force, in particular the use of live ammunition.”

And the Darfur Bar Association had said in a statement on Monday, “Several grave crimes occurred against the revolutionaries yesterday (Sunday) following the December 19 march, and among the most heinous and grave crimes were the rape of women.”

The commission added, “According to the testimonies of some of the rapists, some of them threatened to open criminal reports against them for engaging in prostitution, in order to force them to remain silent.”

The Darfur region, located in the west of the country, is one of the most common areas in Sudan where rape crimes are rampant.

The Central Committee of Sudanese Doctors said in a statement that a person was shot in the head by security forces in Omdurman, on the banks of the Nile from Khartoum, the second person to die as a result of the repression that took place on Sunday, raising the death toll in the protests to 47 people since October the first.

The committee had said earlier that more than 300 people were injured in several cities during the protest, and that there were some injuries from live bullets and tear gas canisters.

The media advisor to the army chief, Abdel Fattah Al-Burhan, said that the army will maintain national security and be aligned with the people’s aspirations for democracy.

Abdullah Hamdok, who did not comment on Sunday’s events, said he signed the agreement in order to end the bloodshed and preserve economic achievements.

On October 25, the army commander, Abdel Fattah al-Burhan, announced the dismissal of the Hamdok government and the dissolution of the Sovereignty Council, the two governing authorities in the transitional phase that was supposed to lead to the handover of power to a democratically elected civilian government in 2023.

Although Hamdok was reinstated without his government on November 21 under a political agreement with him, this agreement did not win the approval of many Sudanese who are now demanding purely civilian rule.

The Forces of Freedom and Change coalition called for continued escalation in the face of the military’s domination of power.

Activists on the walls of the capital, and on social media pages, called for new demonstrations on December 25 and 30.

These were the details of the news Sudan demonstrations: Sudanese women protest against the “rape” of female demonstrators... for this day. We hope that we have succeeded by giving you the full details and information. To follow all our news, you can subscribe to the alerts system or to one of our different systems to provide you with all that is new.