The Minister of Justice and the Attorney General of Russia confirm... 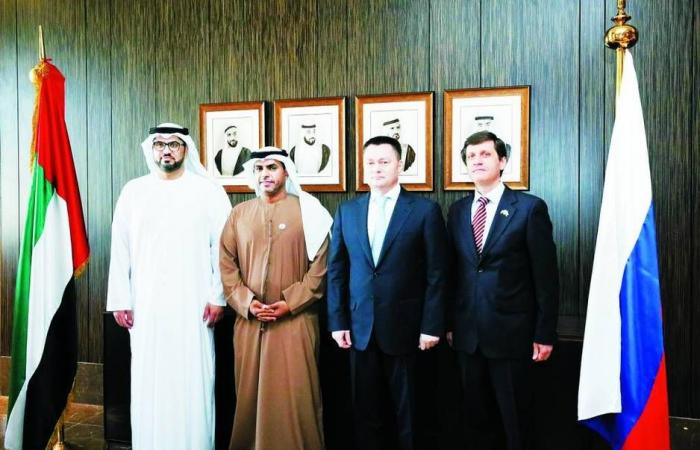 Abdullah bin Sultan bin Awad Al Nuaimi, Minister of Justice, discussed, during his meeting with Igor Krasnov, Attorney General of the Russian Federation and his accompanying delegation – in his office at the Ministry of Justice in Abu Dhabi – ways to enhance judicial and legal cooperation between the two friendly countries.

He praised the bilateral cooperation with the Russian Federation, the close relations between the two countries and their keenness to enhance cooperation in the various judicial and legal fields, within the framework of implementing the agreements in force between the two countries in the field of extradition and providing mutual legal assistance in criminal matters.

He stressed the importance of exchanging experiences between the two countries, within the framework of the Ministry of Justice’s constant keenness to support cooperation relations between the two sides, follow up on the implementation of agreements, and achieve a common vision towards assistance in measures that contribute to achieving justice that everyone seeks.

For his part, the Attorney General of the Russian Federation expressed his happiness at visiting the UAE.. He praised the depth of bilateral relations in the field of legal and judicial cooperation.

He said that relations with the UAE are solid and strong, and are reinforced by the agreements signed in the legal and judicial fields, which work will continue to be supported and strengthened to serve the interests of the two friendly countries.

In a related development, Counselor Dr. Hamad Saif Al Shamsi, Attorney General of the State, discussed during his reception in his office, Igor Krasnov, Prosecutor of the Russian Federation, ways to develop prospects for cooperation between the two countries in the work of public prosecutions, and to enhance coordination between them in issues of common interest, especially With regard to cooperation in combating transnational organized crime, protecting human rights, and exchanging articles on the national laws and regulations of both countries, in accordance with international agreements.

The two sides signed a memorandum of understanding that included exchanging expertise and experiences, activating visits, holding continuous consultations, joint conferences and workshops, as well as exchanging research results in criminal investigation and criminology and data related to investigation methods and means of combating crime, and the optimal use of modern technologies and emerging technology, such as artificial intelligence and “Block Chain”. and the Internet of Things, to facilitate access to criminal justice.

During the meeting, Counsellor Al Shamsi reviewed the UAE judicial system, and a brief overview of the development of the criminal justice systems in the country, most notably the legislative developments that support the work of the judicial system in line with the UAE Centennial Vision 2071, and a package of legislative changes that included about 40 laws approved by His Highness Sheikh Khalifa bin Zayed Al Nahyan, President The state, may God protect him, as it is the largest project to develop federal legislation and laws in the state.

He pointed out that this meeting comes in light of the distinguished relations between the two friendly countries in all legal, cultural and economic fields sponsored by the leaderships of the two countries, keen to lay the foundations for global peace, security and stability, consolidate prompt justice and mobilize support and support for all humanitarian issues, peaceful coexistence and tolerance among nations.

Al Shamsi pointed out that the UAE and Russia constituted a pioneering global model in the rule of law and the efficiency of the judicial and legislative system, which was the basis for ensuring the protection of human rights without discrimination or discrimination. He reviewed the global achievements of the UAE in the rule of law, most notably the “Global Rule of Law” index for all countries in the Middle East and North African countries.

These were the details of the news The Minister of Justice and the Attorney General of Russia confirm... for this day. We hope that we have succeeded by giving you the full details and information. To follow all our news, you can subscribe to the alerts system or to one of our different systems to provide you with all that is new.