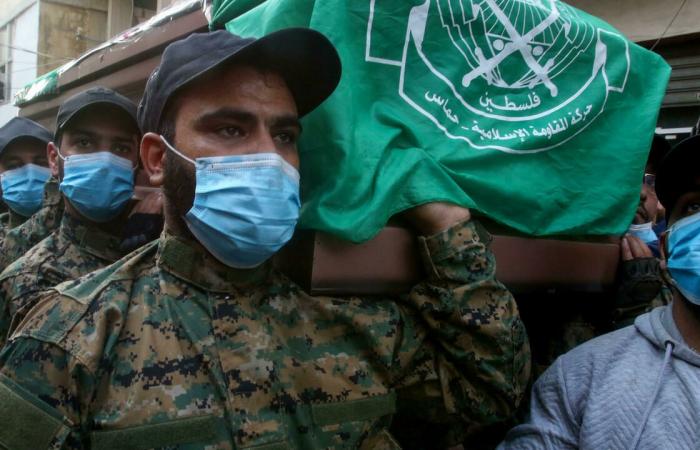 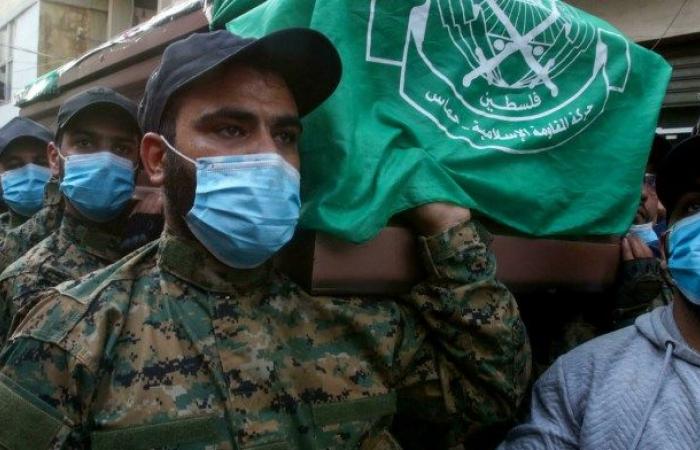 A member of the Hamas leadership in Lebanon, Raafat al-Murra, who was participating in the funeral, accused, in a telephone conversation with Agence France-Presse, “elements of the Fatah National Security Forces of shooting at the mourners as they reached the entrance to the cemetery” in the Burj al-Shamali camp near the city of Tyre.

He added that the shooting resulted in the killing of three members of Hamas and the wounding of six mourners.

A huge explosion rocked the Burj al-Shamali camp on Friday evening. Hamas announced that it was caused by “an electrical short in a warehouse containing a quantity of oxygen and gas cylinders designated for Corona patients,” but a Lebanese military source stated that the warehouse belonged to Hamas and that it also contained ammunition and weapons. But he did not specify the cause of the explosion.

On Saturday, Hamas mourned one of its members, Hamza Shaheen, who it said was “martyred in a jihad mission”, without specifying what mission he was doing in Lebanon. Shaheen died on Saturday of injuries sustained in the blast on Friday evening.

In the Gaza Strip, Hamas announced that the head of the movement’s political bureau, Ismail Haniyeh, visited the family of the martyr Hamza Shaheen to offer condolences.

A resident of Burj al-Shamali camp, who declined to be identified, told AFP by phone what happened today, saying, “When the funeral arrived at the cemetery in the camp amid an armed deployment of Hamas and Fatah members, a dispute occurred between mourners, and suddenly shooting started from the surrounding buildings.”

“Then we no longer know who was shooting at whom,” he added.

Ayman, another Palestinian resident of the camp, said, “When shooting started, the mourners began to retreat and there was chaos, and people fled from the place.” He pointed out that a state of security alert for the Fatah movement currently prevails inside the camp.

The funeral witnessed a large-scale armed deployment of members of the Hamas and Fatah movements, which are the two most prominent Palestinian factions in the camp.

Before the incident, the mourners roamed the streets of the camp to the sound of chants in support of Hamas, Haniyeh and the commander-in-chief of the Izz al-Din al-Qassam Brigades, the movement’s military wing, Muhammad Deif.

Lebanon has a long history of tensions, security bombings, and military confrontations with and inside Palestinian camps.

There are at least 192,000 Palestinian refugees in Lebanon, according to official estimates, most of whom live in 12 camps that have, over the years, turned into overcrowded outposts, buildings and electrical wires, and sometimes into a haven for outlaws.

The Lebanese security forces do not enter the Palestinian camps according to an undeclared agreement between the Palestine Liberation Organization and the Lebanese authorities, and the factions exercise a kind of self-security inside the camps.

The various Palestinian factions keep weapons in the camps. During the past decades, several camps witnessed assassinations and car bomb attacks between rival groups or political disputes in the Palestinian territories, in addition to armed confrontations between factions.

Hamas and the Fatah movement led by Palestinian President Mahmoud Abbas, 86, have been at odds since 2007, after Hamas took control of the Gaza Strip.

The dispute between them dates back to 2006, when Hamas won the last legislative elections held in the Palestinian territories, but the West and Israel refused to recognize the results of the elections, while Fatah refused to participate in a government formed by Hamas. Then military confrontations began between the two sides, leading to the expulsion of Fatah from the Gaza Strip, which has been besieged by Israel since that time.

No legislative or presidential elections have been held in the Palestinian territories for 15 years.

On Saturday, municipal elections were held in the occupied West Bank villages that were not organized in the Gaza Strip due to Hamas’ refusal to hold any ballot, even calling for national legislative and presidential elections.

The armed presence of the Palestinians in Lebanon dates back to the seventies when the Palestinian guerrillas began launching operations against Israel from Lebanon, before the outbreak of the Lebanese civil war in 1975 between Christian parties and Palestinian factions and their allies from the Lebanese leftist and Muslim parties. In 1982, Israeli forces invaded Lebanon and laid siege to the western neighborhoods of Beirut, where the Palestinians had a great deal of weight. Following the Israeli invasion, 11 thousand Palestinian fighters left Lebanon.

These were the details of the news Three killed in shooting in a Palestinian camp in southern Lebanon,... for this day. We hope that we have succeeded by giving you the full details and information. To follow all our news, you can subscribe to the alerts system or to one of our different systems to provide you with all that is new.