Putin: Many differences, as well as opportunities for cooperation with Israel 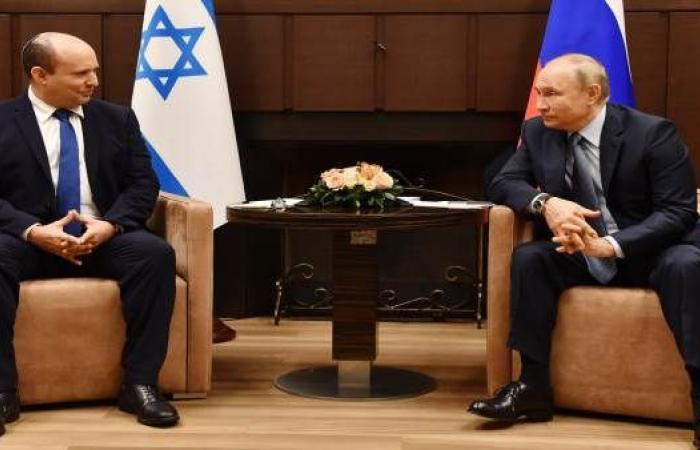 When receiving Bennett in the Russian city of Sochi on Friday, Putin described the relations between their two countries as “unique” and characterized by mutual trust, expressing his hope that Bennett’s government would continue the approach of his predecessor, Benjamin Netanyahu, with regard to Israeli-Russian relations.

Putin pointed out that there are “points of contact” between Russia and Israel in the Syrian issue, especially with regard to the fight against terrorism. He said, “As you know, we are making efforts to restore state authority in Syria, and there are disputed issues between us and their number is not small, but there are also points of contact and opportunities for cooperation, especially with regard to issues related to the fight against terrorism.”

He suggested to Bennett exchanging data on the situation in the region, expressing his conviction that “this would be very useful.”

The Russian president said that economic and trade ties between his country and Israel “are developing successfully, although they are still modest so far in terms of size.”

In turn, Bennett stressed the importance of relations with Russia for Israel, noting that Putin during the past two decades led the process of strengthening relations between the two countries and succeeded in promoting them to their current level, describing him as a “very close and true friend of Israel.”

In his first meeting with Putin, Bennett expressed his intention to discuss developments in Syria and “efforts to stop the development of Iran’s nuclear program” with Putin.

Before leaving for Russia, Bennett told reporters, “The relationship with Moscow is an important component of Israeli foreign policy, due to Russia’s international and regional standing and the presence of one million Russian-speaking citizens in Israel who form a bridge between the two countries.” He added, “In general, Israel’s foreign policy and its international standing are significantly enhanced, and there is great potential and the direction in which things are going is very good.”

Following the announcement of the Putin-Bennett meeting, the Israeli newspaper, Haaretz, quoted an Israeli official familiar with the visit as saying that its main goal is to build “solid relations between Bennett and Putin, and to make it clear that the exchange of power in Israel will not harm relations and cooperation between the two countries.”

In turn, the newspaper “Israel Today” quoted an Israeli political official that Bennett’s message to Putin would be that “the two countries have a common interest in working against extremist Islamic terrorism, and that Israel will act with all force against the Iranian factions in Syria.”

This is the first time Bennett has met Putin, but they discussed bilateral relations in two phone calls that took place after Bennett took office in June.

These were the details of the news Putin: Many differences, as well as opportunities for cooperation with Israel for this day. We hope that we have succeeded by giving you the full details and information. To follow all our news, you can subscribe to the alerts system or to one of our different systems to provide you with all that is new.