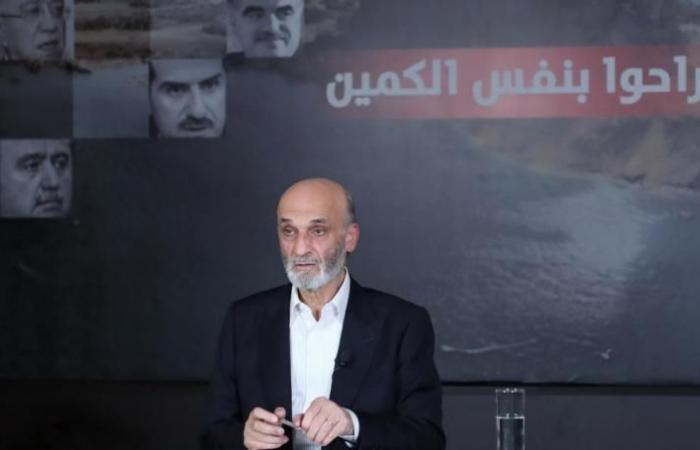 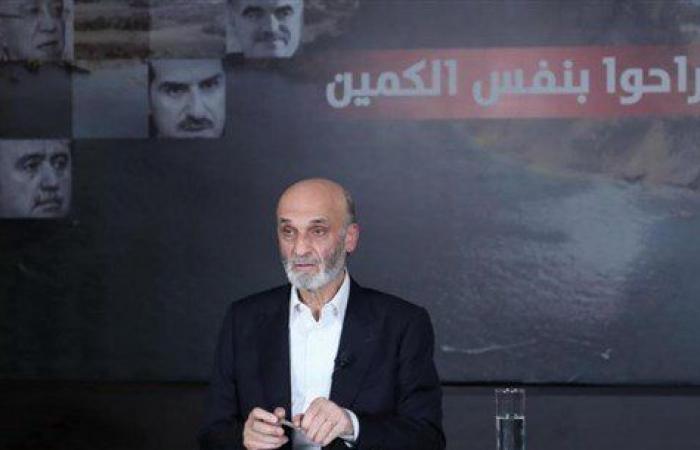 It was not a quiet week in Lebanon, as all the living, social and even security commotion caused the Lebanese to sit on a hot plate, especially after the offensive speech of the Secretary-General of Hezbollah on Monday night, whose main title was “Forces”.

The response of the “forces” chief, Samir Geagea, was also fiery, as he considered that Nasrallah was in a big predicament, “and that his speech was a poisonous gift, full of fallacies, lies and rumors that are not based on any truth. Pomegranate and many victims in the suburb.”

Geagea stressed that if it is true that the “Hezbollah commissioner” before the military court asked to listen to me, “Takram Aino”, but on the condition that I listen to the Secretary-General of Hezbollah, Sayyed Hassan Nasrallah, before me, for a small reason, which is that the “forces” and since the end of the civil war have not violated it, and it is a party It is registered, at a time when “Hezbollah” is not registered with the Ministry of Interior and has a number of impurities and elements accused of many things.” He said: “I have not yet been notified of any matter, and if I was informed, we prepare the necessary legal response, but before the legal response there is a political response, the days of Our Lady of Salvation are over. No one should think that the strong is with his strength and the ordinary citizen is something else.”
Geagea, in a direct view of the “Time Has Come” program with the media, Marcel Ghanem via MTV, stressed that “no one will see Samir Geagea on the Yarzeh road, and the past days are gone without a return, and when the investigation is done correctly, we are ready and not with this.” Never style. He asked, “Isn’t the government commissioner at the Military Court supposed to wait for the investigations to act? And in light of what he asked to listen to me if that is true, then on the ground there is nothing to condemn Samir Geagea?”
In response to the recent speech of the Secretary-General of “Hezbollah”, he considered that “Nasrallah’s speech was full of inaccuracies and rumors that are not true.” He said, “The story is not the story of Ain al-Remmaneh or the Christians, and the evidence is the photos that spread in Tripoli. The truth is that the story today is a great national story, so they “please young people’s mind.”

In response to a question about whether the “At-Tayouneh events” were a gift from Nasrallah to him, he said: “I do not consider them as such at all, but rather consider them as ominous events that we were all indispensable for.” On him because he is a direct threat to me.”
Geagea clarified that “all the Lebanese people “have emerged from their religion” from Hezbollah and its practices and the situation we have reached, which is the result of wrong policies,” noting that “the Amal Movement” disagree with it about the way the state is run and the electoral law, but at least we meet with it in recognizing Lebanon as a final homeland for all. His sons are unlike “Hezbollah”, which has no “Hat Ammar” among us.

Geagea stressed that “Nasrallah is going through a very big dilemma, for he has been rejecting the judicial investigation for four months, and the first arrival of French President Emmanuel Macron to Lebanon with the French initiative in his hand, Muhammad Raad, representing Hezbollah, agreed to it while rejecting the international investigation, and from here they do not want an international investigation and do not want Fadi Sawan, not even Tariq Bitar. He added: “I conclude from Hezbollah’s rejection of everything that has been suggested that it has anything to do with the explosion of the port, and I do not know what Judge Bitar is doing, but as a citizen I am waiting for the indictment to be issued.”

He pointed out that “on the day I was arrested, there was a Lebanese-Syrian security system, so they fabricated files and sent them to the Judicial Council. Today, Judge Bitar is not affiliated with any political party, and he refused to receive the file before Sawan. Would a conspirator refuse to receive a case?”

On the other hand, Geagea indicated that “the head of the Free Patriotic Movement, Gibran Bassil is the first ally of Hezbollah in Lebanon, and talk about a conspiracy that serves Bassil to retaliate against Berri is nonsense,” explaining that “President Michel Aoun for his reasons and Prime Minister Najib Mikati, who does not want to He tells his government from its inception, by refusing to propose the overthrow of Judge Bitar, and more than one official in Hezbollah and the Amal movement threatened days before the events of Tayouneh to deal with “other methods” unless Bitar was overthrown, and they went on the fateful Thursday to other methods.

Geagea stressed that, “I do not know who fired the first bullet, but it is certain that the first four wounded were from the people of Ain al-Rummaneh, and the television stations provided vivid facts about what happened during the Tayouneh events.” land until the government meets and changes its decision regarding the judicial investigation.”

Geagea considered that “the story is not the story of their entry into Ain al-Remmaneh, given that it is daily entered by Sunnis, Shiites, and citizens of different sects, hence the need to review the existing photos and documented facts that prove the method of entering Ain al-Remmaneh,” and considered that “Hezbollah” fabricated all this story. And the presence of an ambush to invent an enemy so that he can tell his group that I did not ask you to quit absurdly, nor did some of you fall in vain without changing the judicial investigator, so he invented an enemy in a nutshell. Also, the story today is bigger and bigger than Aoun’s contact with me, and Hezbollah has one goal, which is to stop the investigation into the issue of the port explosion, and they intervened by all legal means and no one said a word to them, but their recent actions are rejected, and it says in one way or another that they are related to the Beirut explosion.”

He explained that, “We called the army on Wednesday evening, and asked them to spread as much as possible due to the sensitivity and the army spread, but the attack took place in a small street in which there were few army members, and in front of the attack, they were unable to control the matter,” noting that “we have no problem referring the Tayouneh events to the council.” Adli, and so far nothing has failed in the investigation’s story.”

Geagea pointed out that the “forces” did not incite the people of Ain al-Rummaneh, and the people of the suburb are not the biggest threat, but Hezbollah by its actions is the biggest threat to all the Lebanese, and Mr. Hassan Nasrallah is the most convinced that the “forces” project is the real state, but it is embarrassing, so what can he say to his group? He needs an enemy because he cannot tell them, “I didn’t think it was right and sold you for the wrong thing!”.
Geagea revealed, “We do not have fighters, but we have 30 to 35 thousand party members, and 100 thousand fighters for Nasrallah, who cost 50 to 100 million dollars a month, and it would be better if this money was spent on the south and Baalbek-Hermel in order to fully prosper, and therefore where are the 100 thousand in front of daily Israeli violations?” “.

Geagea continued: “Nasrallah’s words about “politeness” and its affiliations return to its owner, and they are the ones who caused the Tayouneh events, and the “barouda” in the home of every Lebanese is one thing, and the military organizations are another matter, considering that “Mar Mikhael’s understanding is what led to the Tayouneh events, because it is one of the He gave a Lebanese cover to Hezbollah.
Geagea stressed that the “Lebanese Forces” are a guarantee for all Lebanese and Christians, and we have centers in all regions, and when Nasrallah talks about the Christians, he takes us back thousands of years, and the biggest project that contradicts the Christians in Lebanon is the project of Hezbollah. This is completely with Hezbollah’s goals.

Geagea described “our accusation of supporting ISIS and Jabhat al-Nusra is nonsense and a blatant lie, and it is an additional argument for Sayyed Hassan Nasrallah to get out of his predicament,” stressing, “We do not want war, but this is one thing, and letting someone impose his will on us by force is another matter.”

In response to Nasrallah’s statement that the “forces” want war, he said: “This is why the forces started with Rafik Hariri and completed and worked on May 7, and the events of Ain al-Rummaneh… Palo Nasrallah likes and what he tries to impose his will on the Lebanese.” He always believes that he protected Christians and compares himself to ISIS in the question Today in the 21st century, it is never someone who does not kill Christians, but rather to live their freedom and with dignity.” He added, “No one thinks that confrontation with Hezbollah is military,” considering that “the confrontation is with Hezbollah’s project and it is political, and when the political forces rejecting its project are gathered, they will not Hezbollah can do anything, and this is the spirit of resistance that we enjoy,” stressing, “We are basically confronting politics, and I called on Wednesday, before the Tayouneh events, for the free Lebanese to be civilized to face peacefully the overthrow of the investigation.” .

“We will remain behind the investigation into the explosion of the port locally and internationally, and we will not allow a crime of this magnitude to go unpunished,” Geagea stressed.

These were the details of the news A fiery response from Geagea to Nasrallah… and “The Lady of... for this day. We hope that we have succeeded by giving you the full details and information. To follow all our news, you can subscribe to the alerts system or to one of our different systems to provide you with all that is new.