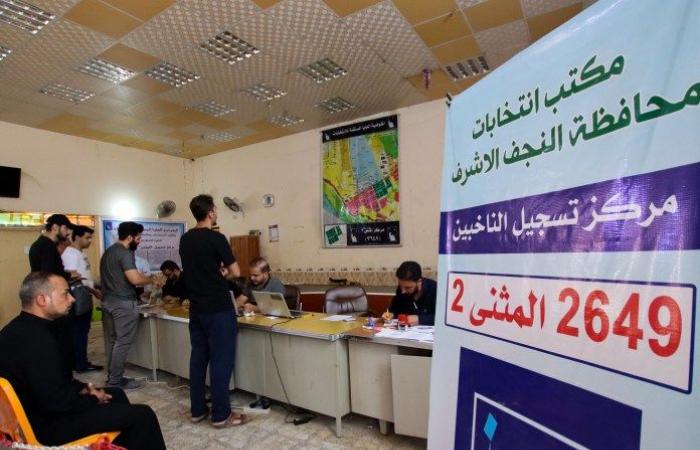 The Iraqi electoral law neglected to set a ceiling for spending on electoral propaganda, which made the door open for political money to favor some influential blocs that have power over others, according to observers.

These elections were scheduled for 2022, but the date was presented as one of the few concessions made by the authorities to confront the unprecedented popular uprising, which erupted at the end of 2019, denouncing the rampant corruption and mismanagement of public institutions, and the lack of public services in Iraq.

On October 10, about 25 million Iraqi voters will be invited to choose from among some 3,249 candidates vying for 329 seats in parliament.

The law is not specified

The spokeswoman for the Independent High Electoral Commission in Iraq, Jumana Al-Ghalai, told Al-Hurra that “there is no provision in any law related to the electoral process about setting a ceiling for electoral campaigning, in order for the commission to obligate the candidate to do so.”

In his interview with Al-Hurra, the former head of the electoral administration, Miqdad Al-Sharifi, stated that “there was a draft law stipulating this previously, but it was not passed.”

The current official in the commission, Imad Jamil, confirmed that the electoral campaign system does not actually set a ceiling for spending on it, but he pointed out that “the electoral law has seven paragraphs, starting from Article 32 to 37, all of which are penalties that limit these operations,” adding that “the electoral law The parties are also monitoring the sources of funds and financing.

He told Al-Hurra: “We do not rely only on the electoral propaganda law in our work, but there are nine systems that regulate the voting process and elections in general, starting with observers, candidates and agents to electoral campaigns.”

Jamil explained that “most of the candidates are affiliated with parties, and their number is 2,300, and the independents are about 900.”

He stressed that “the law of parties is subject to the controls and resources of funds, financing, use of state resources and influence, all of these matters are followed up,” noting that the Commission has “monitoring teams spread throughout Iraq, amounting to 1,079 teams in addition to technicians in different governorates.”

He said, “These teams report on the spent funds and electoral propaganda spread in Iraq and all electoral districts daily.”

Jamil points out that “the spending of huge funds in electoral campaigns to the point of extravagance has not been monitored until the sources of funds are monitored and monitored, because they are posters, which is a normal matter.”

But the head of the Association for Journalistic Freedoms in Iraq, Mustafa Nasser, told Al-Hurra that there are indeed other laws, such as the Integrity Law, “but they are not applied on the ground. We have not seen politicians or parties summoned to ask them about their funding sources.”

He added, “Most of the politicians in Iraq are now extremely wealthy, even though they were not rich only a few years ago, and the law does not hold them accountable. How does the law obligate them in electoral campaigns?”

Al-Ghalai also confirms that the commission is already following up on the parties’ funding sources, but “we have no interest in the electoral ceiling. This is usually a law that is supposed to be approved, and the commission only applies the law.”

When Al-Ghalai was asked if the lack of a ceiling for propaganda puts the Iraqi elections in front of the problematic role of political money and the preference of parties over others, she said: “Certainly.”

Observers point out that some candidates for the Iraqi elections are exploiting many loopholes and circumventing the laws, and that there are other ways to use political money in the elections.

The director of the Iraqi-Australian Center for Studies, Ahmed al-Yasiri, told Al-Hurra that “all the existing blocs associated with the current parliament use their presence in ministries, government departments and state cars for electoral propaganda, and this is clearly visible.”

Nasser says: “At the level of the regions north and west of Baghdad, there is the use of political money and the exploitation of government capabilities by some candidates.”

He explains: “For example, ‘District 12’ (Al-Mansour and Al-Amiriya) has become a type of paving roads, lighting streets, and repairing electricity booths, with an assumed government effort, but some candidates say ‘We fixed this’, by virtue of their presence in the authority or parliament and their relationship with certain ministers. They in turn direct engineers and technicians to fix such things, sometimes claiming to be middlemen.”

As for southern Iraq, Nasser says: “There is a material incentive, such as buying electoral cards, or enabling voters to obtain loans from banks, and promises to include them in social welfare and others.”

Nasser explains how to “buy” electoral cards, saying that “some candidates or those working with them, agree with citizens who are indifferent about the elections, to go… and give their votes to a certain bloc in exchange for a sum of money starting from 50 thousand dinars (30 dollars) up to 200 dollars.” He pointed out that “this is happening in many regions, which made many see the lack of benefit from the elections and support boycotting them.”

And Agence France-Presse points out that the enthusiasm of the 25 million voters towards participation appears weak in a country where about a third of the population lives in poverty, according to the United Nations.

و .ذاع On the Iraqi Al-Sharqiya channel, a leaked audio recording said that a female candidate in the current Iraqi elections is asking to collect the largest number of pictures of electoral cards, and that the price rises whenever a person brings pictures of cards of his family and relatives.

The law punishes whoever gives or offers to a voter or induces him to vote in a certain way for himself or for others.

For her part, Al-Ghalay said that the Electoral Commission has, in fact, excluded one of the candidates “because of his involvement in the purchase of voter cards, because he violated the terms of the electoral campaigns,” noting that “the Commission receives complaints, whether they are from committees, candidates, citizens or any party, but it must be Evidence is presented, and therefore action will be taken against all violators.

And she stressed that “the Electoral Commission takes measures, whether with a fine or imprisonment, and has reached to cancel the approval of a number of candidates because of their violation of the electoral campaign system and the provisions of the law, and for candidates who violated the electoral conduct document.”

Among the penal provisions for electoral violations, “whoever hangs election banners outside the designated places shall be punished by imprisonment for a period of no less than one month or a fine not exceeding one million, as well as other penalties for those who infringe on the electoral campaigns of other candidates, or use force against one of the candidates.” .

Al-Ghalay said that “the Electoral Commission has formed a main committee and sub-committees in all the electoral district offices, in addition to that the Commission coordinated its work with the Baghdad Municipality and the municipal departments through a memorandum of understanding in order to support and support the committees in following up on electoral campaigns, and the electoral districts to follow up throughout Iraq, as we coordinated We worked with the Media and Communications Commission to support the Commission in following up on the media and social networking sites.”

She added that “these committees monitored more than 160 violations, which were submitted by the subcommittees to the main committee in the National Office, which in turn submits them to the Department of Consultations and Legal Specialists in this aspect.”

She pointed out that some violators were informed of the removal of this violation, and they did so.

In the event that some candidates continue to commit violations, Al-Ghalay said, “The Consultation Department will submit its report and recommendations to the Board of Commissioners for the purpose of taking the necessary measures against the violators.”

She added, “The Electoral Commission has excluded one of the candidates for violating the terms of the electoral conduct document, which is an initiative of the President of the Republic, the provisions of which were set by the Electoral Commission in cooperation with the United Nations, which organizes the paths of the electoral process, grants equal opportunities and prevents insult, slander and defamation.”

The commission has already excluded, on Monday, the candidate and former member of the House of Representatives, Shaalan Al-Karim, from the elections, “because he violated Articles 10 and 11 of the electoral system related to the use of power and state resources in his electoral propaganda,” according to Jamil, although “he has influence and weight in Parliament, and we have proven violation of the electoral system.

But the judiciary returned Karim to the elections, Wednesday, after he challenged the commission’s decision, according to Nasser, “although there are evidence and video footage of his use of public money in his electoral propaganda,” noting that he is close to Parliament Speaker, Muhammad al-Halbousi.

But Al-Ghalay denied, in an interview via the website,NRTThe news that Al-Halbousi “pressure on the commission’s council to reverse its decision,” noting that “the exclusion decision (issued by the commission) is not final and is subject to appeal before the judicial body.”

Equal Opportunities.. Publicity is not the only obstacle

The former official in the commission, Miqdad Al-Sharifi, calls for an end to spending on electoral advertising, noting that “some candidates are based on an influential party that has power or a widespread media, and some other candidates do not have these tools.”

Accordingly, Al-Sharifi believes that “setting the ceiling gives a single rule and equal opportunities, and allows youth and women to compete.”

On the other hand, Nasser replies that the idea that one-third of the candidates are women because there is a quota for everyone is obligated to.

As for young people, Nasser asserts that “our problem with the law is that it does not allow young people to run for office in the first place. The law sets the age of at least 35 years, while all parliaments in the world are 25 years old and above, so I think that the law prohibits young people from running, especially And that the vast majority of those who revolted against the current regime and authority since October 2019 were under thirty years old.

These were the details of the news “Expensive spending and buying votes”… Political money threatens “parity” in the... for this day. We hope that we have succeeded by giving you the full details and information. To follow all our news, you can subscribe to the alerts system or to one of our different systems to provide you with all that is new.