Video: The landing of the first space capsule with a civilian... 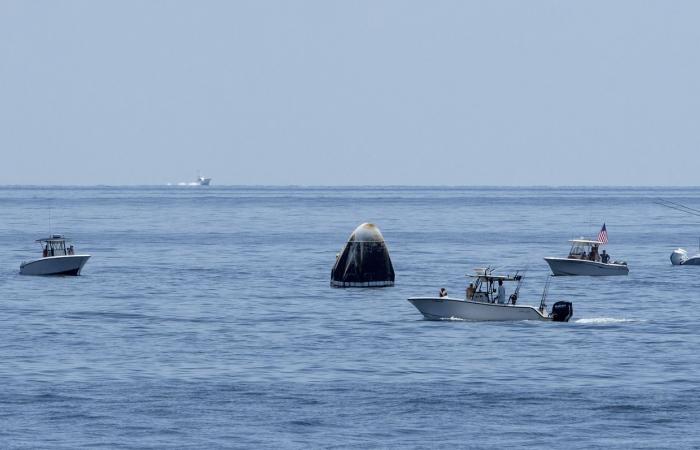 The US spaceship “Crew Dradon”, which for the first time in history consists of civilians only, made a landing in the waters of the Atlantic Ocean near the coast of the US state of Florida.

The crew of the ship as part of the “Inspiration4” commercial mission donned their space suits and began preparing for landing several hours before its launch.

And at 19:00 yesterday evening, Saturday, the eastern coast of the United States, the ship entered the dense layers of the atmosphere. At 19:08, ground authorities confirmed the successful landing of the “Crew Dragon” in ocean waters.

This spaceship was in Earth’s orbit for about 3 days. During this period of time, the crew members conducted a series of scientific research, originally on the effect of weightlessness on the human body. The ship’s owner, SpaceX, believes that the results of this research “will be important to support the health of people on Earth and during future space flights.”

During its flight, the ship reached an orbit at an altitude of 590 km, which is higher than the orbit of the International Space Station (about 420 km). The company “SpaceX” stated on its official website that a manned ship had reached such a high orbit for the last time in 2009, when the crew of the American spaceship “Atlantis” in the framework of the “STS-125” mission served the Hubble space telescope, which was Its orbit is located at an altitude of 578 km.

These were the details of the news Video: The landing of the first space capsule with a civilian... for this day. We hope that we have succeeded by giving you the full details and information. To follow all our news, you can subscribe to the alerts system or to one of our different systems to provide you with all that is new.