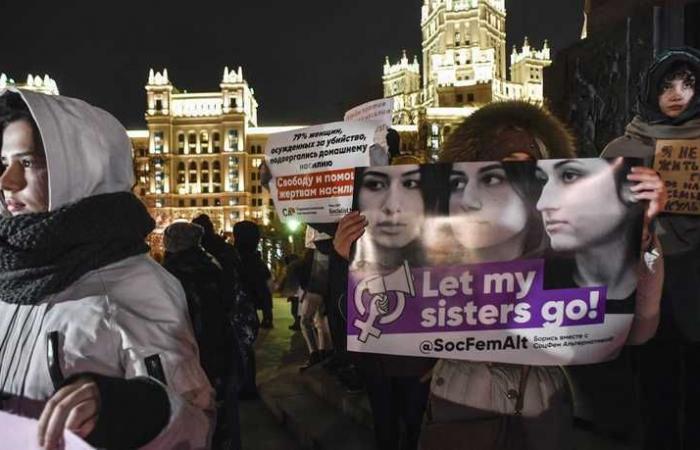 With parliamentary elections approaching in Russia, women are activating to make “domestic violence” an important voting issue, especially in light of the regime’s refusal to help victims.

Middle-aged women form part of Russia’s ruling party base, but the authorities’ refusal to help victims of domestic violence could hurt their support in upcoming elections, according to a report in the New York Times.

Russian voters are heading to cast their votes in legislative elections organized from Friday to Sunday, where voters will have a choice between the ruling party “United Russia” and a number of diverse candidates or organizations loyal to the authority, while opponents seek to mobilize citizens against Putin’s policies and thwart his efforts to deliver his followers to Parliament. .

Alyona Popova, a 38-year-old lawyer and candidate for the elections to the State Duma “Parliament” for the 205th constituency, which is considered a working-class area in Moscow, where domestic violence is widespread, is trying to win women in the elections by raising their awareness about the problem of the lack of protection measures, as it relies in Its electoral platform stipulates that this type of violence is classified among the crimes that deserve criminal penalties.

Numbers reveal the extent of the problem

She described what is happening in the family as an “epidemic”, which prompted her to submit a petition to this end, which was signed by about one million people.

Polls conducted by the independent Levada Center in 2020 indicate that 80 percent of respondents support the need for legislation to reduce domestic violence, especially since 54 percent of the population are women.

The population’s interest in domestic violence comes in fifth place after corruption, high prices, lack of health opportunities, and the Corona epidemic.

Deputy Speaker of the State Duma Pyotr Tolstoy says this is the 90th priority for voters, and has ridiculed suggestions that women abandon his party’s support for this reason.

Over the past decade, Russian President Vladimir Putin’s administration and his party have become increasingly conservative in social policies, as Russia’s conflict with the West has widened.

“Anna” and “No to Violence” are centers specialized in providing legal, material and psychological assistance to women facing domestic violence. The Russian government classified them in 2016 as a “foreign agent”, which imposes burdensome licensing requirements on these institutions.

In 2017, the Russian Parliament voted, by 380 votes to partially decriminalize domestic violence against 3 votes, so that it was converted into an “administrative crime” if it does not occur more than once a year, and those whose violence results in bruising or bleeding are punished with a fine equivalent to less than $70 .

In 2019, a draft law against domestic violence was released, but it was changed in a way that reflects the desired outcome.

In recent years, many cases have sparked outrage in the country, making the position of those who reject domestic violence stronger, including the case of a woman whose husband cut her hands with an axe, and he was subsequently sentenced to 14 years in prison.

These were the details of the news Central – Russian women are fighting against Putin’s candidates for this day. We hope that we have succeeded by giving you the full details and information. To follow all our news, you can subscribe to the alerts system or to one of our different systems to provide you with all that is new.