More than 56 thousand expatriates leave Kuwait in the first half..for... 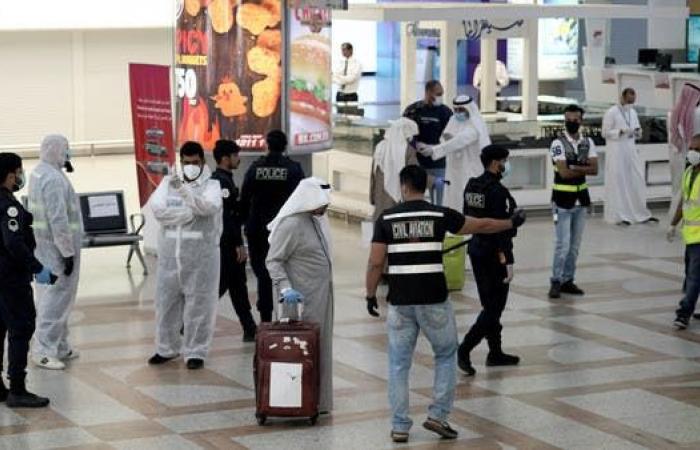 The National Bank of Kuwait stated, in a report today, Tuesday, that the population of Kuwait witnessed in 2020 the highest rate of decline on an annual basis in nearly 30 years by 2.2%, and the population decreased again by 0.9% since the beginning of the year until the first half of 2021 to reach to 4.62 million people.

In fact, he added, the continued application of job resettlement policies (Kuwaitization) and the weak economic environment due to the pandemic forced companies to lay off employees, which prompted thousands of expatriate families to leave the country.

According to the latest demographic data issued by the Public Authority for Civil Information, the population of Kuwait decreased by 0.9% in the first half of 2021 to 4.62 million after a decrease of 2.2% annually in 2020.

The data showed that more than 56 thousand expatriates left the country in the first half of 2021, which led to an increase in the total number to about 190 thousand since the beginning of the pandemic and the start of implementing the closure and precautionary measures in early 2020.

The bank stated that the slowdown in the growth rate of the number of Kuwaiti citizens under the age of 15 continues, reaching 0.1% from the beginning of the year until the first half of 2021, compared to 0.6% last year and 1.0% in 2018.

He added that despite this decline, this population segment, which numbers about 493,000 citizens, represents more than a third of the population of Kuwaiti citizens, which may impose more pressures on the labor market in the future.

He explained that at the same time, the growth of the number of working-age citizens over the age of 15 remained at strong levels, estimated at 2.4 percent, on an annual basis, in the first half of 2021.

He pointed out that the public sector maintained the pace of employment at a rate of 1.8 percent, or about 6,200 citizens, attributable to some extent to Kuwaitization efforts. This type of employment will increase pressure on the budget, as the wage bill alone represents about 60 percent of total government spending.

On the other hand, the employment of expatriates decreased by 2.2% in the first half of 2021 after a decrease of 5.2% in 2020, against the background of a 2.2% decrease in employment activities in both the public and 2.8% private sectors.

NBK indicated that the jobs of domestic workers were less affected due to a decrease of only 1.1% in the first half of 2021, and in fact, the government allowed the start of the return of domestic workers to the country as soon as flights resumed, and with the exception of domestic workers, the numbers of expatriate workers decreased By 2.7% as a result of the decline in private sector employment activities.

The bank explained that the main reason behind the decline in the pace of employment of expatriate workers in the private sector, with the exception of domestic workers, lies in the sharp decline in the construction sector jobs by 9.8% and the real estate by 5.1%, in line with the weak pace of project completion and the decrease in activity in the real estate sector during the pandemic period.

The number of expatriate workers in other sectors such as manufacturing decreased by 5.3% and hotels and restaurants by 2.1%.

It is worth noting that expatriate workers with low wages and low skills were most affected by the repercussions of the pandemic, about 94% of the expatriate labor jobs that were lost, according to the National Bank of Kuwait’s estimate.

In addition, job losses and the rising cost of living forced some expatriate workers to repatriate their families, and the number of expatriate families continued to decline, as it continued at the same pace of the previous year, declining by 0.4% in the first half of 2021.

These were the details of the news More than 56 thousand expatriates leave Kuwait in the first half..for... for this day. We hope that we have succeeded by giving you the full details and information. To follow all our news, you can subscribe to the alerts system or to one of our different systems to provide you with all that is new.