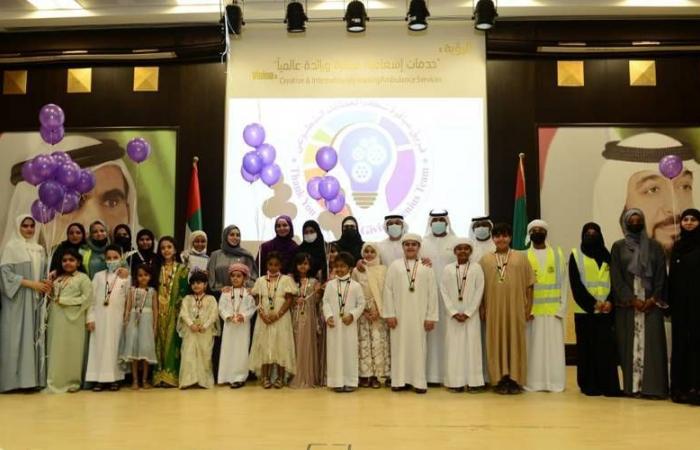 The “Thank you for your volunteer giving” team, in cooperation with the Ghaya Volunteer Team and the Dubai Corporation for Ambulance Services, celebrated the honoring of 50 volunteer heroes, bringing the total number that was honored to 200 children at the state level, coinciding with the celebrations of the country’s golden jubilee, as part of the “” initiative “. Volunteer Heroes”, which aims to instill the values ​​of volunteering in the hearts of all members of society in the presence of Sheikha Fatima bint Hasher bin Dalmouk Al Maktoum, under the patronage of Sheikha Dr. Shamma bint Mohammed bin Khalid Al Nahyan, Chairman of the Board of Directors of Sheikh Mohammed bin Khalid Al Nahyan Cultural and Educational Institutions, and in the presence of Responsible for different volunteer teams.

Sheikha Fatima bint Hasher described the initiative as embodying the beautiful values ​​in society and inspired by the rational leadership, to promote and instill a culture of volunteerism in the hearts of this category, to participate in the sustainability of development and national construction and to interact with all programs that embody the national identity derived from parents and grandparents, noting the important role The family plays a role in bringing up children on the values ​​of goodness, love and giving.

Sheikha Dr. Shamma bint Mohammed bin Khalid praised the volunteer children whose participation was the greatest evidence of the virtuous values ​​in their souls, because volunteer work is a humanitarian value extended to the people of the country and derived from the founding father, the late Sheikh Zayed bin Sultan Al Nahyan, may God rest his soul, because He instilled in our souls the love of goodness, giving and tolerance, raising the flags of the nation and reflecting the honorable image of it.

In turn, Saif Al-Rahman Amir, Chairman of the Thank You Giving Team, praised the idea of ​​the initiative, Ms. Kawthar Al-Rahali, who was keen to honor 200 children of volunteering heroes at the state level to express interest, appreciation and keenness to encourage this age group of children who amazed everyone with positive initiatives and ideas Creative, participating in various workshops aimed at serving the community.

Badriya Juma Al Hosani, founder and head of the Ghaya Volunteer Team, indicated that the honored children represent an honorable generation of firm and ingrained giving in their souls, because they are the children of the future on whom the country depends in promoting its renaissance, development and advancement through positive and wonderful interaction with national initiatives that represent the values ​​of Volunteerism, charity and humanity in the homeland of love, peace and tolerance.

Kawthar Al-Rahali, leader of the Happiness and Positivity Committee in the Thank You team and the founder of the initiative, expressed her appreciation and thanks for the positive interaction and the wonderful cooperation of the children who confirmed, with these beautiful data, that the values ​​of goodness, cooperation and giving are ingrained in their souls and through them the nation is proud of giving its children.

These were the details of the news Honoring 50 volunteer heroes in Dubai for this day. We hope that we have succeeded by giving you the full details and information. To follow all our news, you can subscribe to the alerts system or to one of our different systems to provide you with all that is new.