“Hezbollah” is the cancer of Lebanon, and Washington will solve the... 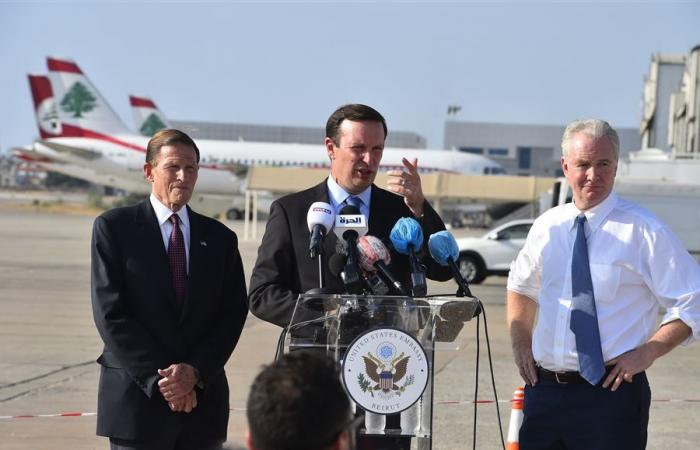 Samar Faddoul
The delegation of the US Congress, which visited Lebanon over a period of two days, seemed more comfortable in its reading of Lebanon’s future, or at least for the upcoming stage, which is full of entitlements.
Four points from which the delegation of the Democratic Congress set out to be a “keystone” for Lebanon, to which the American aspires, namely:
The government and its impact on the public scene, where the delegation expressed its optimism about the possibility of its formation soon, based on promises it received from Presidents Michel Aoun and Mikati no later than the end of the week, and perhaps “before the delegation arrives in his country,” as one of the members indicated. If the creation process proceeds as promised, the role of the Americans, according to members of Congress, is essential in helping the next government on the basis of partnership with Lebanon.

As for the second point, which is addressed by the United States in its positions and lies in its support for Lebanon, where the delegation recalled its country’s greatest support for Lebanon in general and for the Lebanese army in particular. To complete its mission, the delegation will convey its recommendations to the US administration to support the training of the army at the borders or by helping to increase its salaries.

There is no doubt that “Hezbollah” has influence and influence in Lebanese politics, but regardless, the United States of America remains “the largest donor to Lebanon, and its goal is to help Lebanon overcome this crisis,” this was stressed by the delegation that entered the support portal directly to the core of the conflict. It is related to him about the role of Hezbollah in Lebanon, which the delegation considered a terrorist institution, and the “cancer” that spreads at home and makes a living from the tragedy of the Lebanese and creates destruction in the region, which calls for the need to stop its spread.

Speaking about the “party” and its role at home, the delegation points out that Lebanon “does not need the paid Iranian oil that the party brings to Lebanon,” revealing “radical and sustainable solutions that the United States is working on to solve the oil crisis in Lebanon.”

As for the most prominent merit in the domestic arena for the American delegation, it is the necessity of holding the parliamentary elections on time, “which will open the way for the Lebanese people to choose new representatives.” The fourth point was that the American was decisive in respect of constitutional deadlines. In this context, the delegation confirmed that it met with a number of civil society figures, and is counting on the upcoming elections for the arrival of a number of activist figures, revealing the pressure it is exerting towards Lebanese officials to hold the parliamentary elections on time because the United States believes that change comes through elections.

The delegation that closely witnessed the Lebanese “collapse”, starting with the queues of humiliation on the stations, and the total darkness that enveloped Lebanon due to the wrong policies adopted for years on the electricity line, put the ball of “reform” in the court of the Lebanese, as “the United States cannot help Lebanon to end this The crisis is if the state does not take the initiative to help itself, based on the formation of a government of reforms and the holding of parliamentary elections.”

Lebanon, which suffers from the repercussions of US sanctions on neighboring countries by virtue of its political geography, is anxiously awaiting the course of the effects of US sanctions on some personalities and entities. In this context, the delegation sent a clear message to “every corrupt person, from the top of the pyramid to the bottom, that he is subject to US sanctions if his involvement in corruption is proven.”
Regarding its visit to Israel, the delegation made it clear that it will deal with the affairs of the region as a whole, and will include the Israeli-Lebanese negotiations on the maritime borders.

Murphy
Congressman Chris Murphy began the press conference by talking about the ways that his country can provide to help Lebanon and its people, reminding in the context of the role of the United States by providing donations, and stressing the need for his country to increase its support for Lebanon.
Murphy found no “excuse” for not forming “a government capable of conducting dialogue with the International Monetary Fund and representing the Lebanese people in its relations with countries such as the United States.” Presidents Michel Aoun and Nabih Berri are quoted as trusting the formation of the government at the end of this week, while the Prime Minister-designate Najib Mikati stressed, according to Murphy, that “we are two or three days away from its birth.”
Murphy asserts, “all efforts are made to work with the Lebanese leaders to ensure that their promises are fulfilled,” expressing his readiness to invite his fellow MPs in Lebanon to visit the United States “to secure more support for their country.” He concluded: “We are happy and proud that our visit was fruitful.”

Blumenthal
For his part, Richard Blumenthal stressed the harsh necessity that the delegation attaches to visiting Lebanon “at this particular time”, winking from the “credibility of the political class” channel, assuring that “the promises that the delegation heard from presidents today (yesterday) must be translated into action soon. And not to remain words in order to solve the crisis of the people who are suffering strongly today.”
Blumenthal touched on the status of the military institution, which the United States attaches great importance to, explaining that the delegation listened carefully to the institution’s needs and requirements under these difficult circumstances, promising to work on finding mechanisms to raise support for the army.
In his speech, Blumenthal expanded on reading the events on the domestic scene, addressing the issue of the Iranian oil ship, stressing “working to find a sustainable solution to the fuel crisis in Lebanon, and accordingly there is no need to rely on Iranian fuel.”
As for the file of the displaced, he admitted that Lebanon received the largest number of them, until it became, according to the US senator, a “home” for the largest number of them. Based on this, an emphasis was placed on the need for the United States to work with its partners to support Lebanon to overcome this economic and political crisis and the challenges imposed by the Syrian asylum in its territory.
Blumenthal, who is optimistic about “the end of the current crisis that Lebanon is going through,” hoped to form a government when the delegation arrives in the United States on its way back, with an emphasis added to the position of his colleagues on the need to hold elections “that ensure that every Lebanese vote next spring in a safe and free manner.” To bring new people and activists to power.

Van Hollen
The same vision was presented by Senator Chris Van Hollen, who proceeded from the history of friendship that unites the American and Lebanese societies to emphasize the advantages of the special Lebanese system, which integrates the republican with the democratic, on the basis of a plurality of religions, sects and cultures.
Van Hollen joined his hope to the hopes of his colleagues that the government would be formed by the end of the week because of the importance of this step, even though it took a lot of time, noting that the leaders with whom the delegation met showed their commitment to holding the parliamentary elections and promised to hold them on time.
As for the military institution, it is “respected by all because it is non-sectarian.” It is important, according to Van Hollen, “to maintain its support while working to solve the Lebanese state’s political and economic problems.”

These were the details of the news “Hezbollah” is the cancer of Lebanon, and Washington will solve the... for this day. We hope that we have succeeded by giving you the full details and information. To follow all our news, you can subscribe to the alerts system or to one of our different systems to provide you with all that is new.