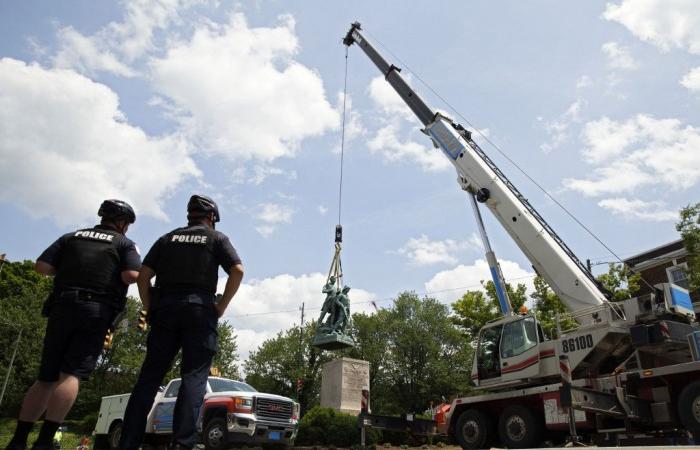 CHARLOTTESVILLE, July 11 — The southern US city of Charlottesville yesterday took down controversial statues including two honouring Civil War pro-slavery generals which had become the focus of protests.

The statues of generals Robert E. Lee and Thomas “Stonewall” Jackson are among hundreds of Confederate monuments in the United States now widely considered symbols of racism, even if their supporters argue they are a historical legacy.

Workers in the Virginia city used a crane to remove the statues — which depicted Lee and Jackson in uniform mounted on horses — as a crowd watched and cheered. No violence was immediately reported.

“Taking down this statue is one small step closer to the goal of helping Charlottesville, Virginia, and America, grapple with the sin of being willing to destroy Black people for economic gain,” Charlottesville Mayor Nikuyah Walker, who is African American, told reporters before the monuments’ removal.

Tensions over the fate of the Lee statue led to violence in August 2017, when a white nationalist drove his car into a crowd of demonstrators in Charlottesville, killing a woman.

The protesters had gathered in opposition to white supremacists who staged a “Unite the Right” rally against plans to remove the statue of Lee.

Then-president Donald Trump came under fire when he said afterward that there were “very fine people on both sides” of the protests.

The Charlottesville violence gave new life to a campaign to remove Confederate symbols which first gained momentum following the June 2015 murders in South Carolina of nine black churchgoers by an avowed white supremacist.

The campaign picked up again following the May 25, 2020 death of George Floyd, an African American killed by a white police officer in Minneapolis, Minnesota.

During the 1861-1865 Civil War, the Confederate South seceded from the United States and fought to maintain slavery, which the rest of the country had abolished.

Defenders of preserving the Confederate symbols have argued that they serve as a reminder of a proud Southern heritage, and say removing them is erasing history.

According to historians, however, most of the Confederate monuments dotting the southern United States were erected during the Jim Crow era of racial segregation and in response to the civil rights movement.

The depiction had drawn criticism for what some saw as a demeaning portrayal of Sacagawea, who is crouching at the men’s feet and looking at the ground, and officials took advantage of the available equipment and personnel to take it down, city spokesman Brian Wheeler told AFP.

Sacagawea assisted Lewis and Clark on their 1804-1806 expedition from the Mississippi River in Missouri to the Pacific Ocean, crossing territory mostly occupied by Native Americans.

Virginia’s flagship university also joined in, confirming it would today begin a project to remove a statue of George Rogers Clark.

George Rogers Clark was William Clark’s older brother and fought against the British army and its Native American allies during the Revolutionary War, seizing swaths of Native territory for the young nation.

“The statue will be placed into storage as the University (of Virginia) continues to work with a committee to determine a suitable location,” a school spokesman told AFP. — AFP

These were the details of the news US city removes flashpoint statues including Confederate generals for this day. We hope that we have succeeded by giving you the full details and information. To follow all our news, you can subscribe to the alerts system or to one of our different systems to provide you with all that is new.