Spain restricts nightlife as virus surges among the young 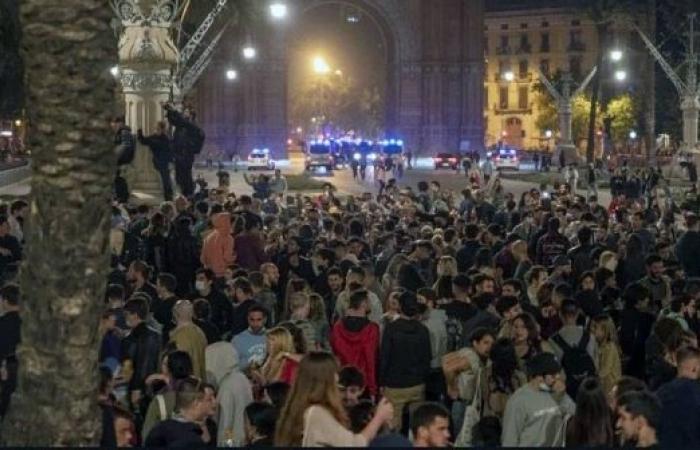 Hind Al Soulia - Riyadh - MADRID — Faced with soaring numbers of new coronavirus infections among unvaccinated young people, some Spanish regions are reinstating curbs on nightlife only weeks after dropping them.

Fearing that the surging contagion could strain health care services as stressed employees try to go on summer holidays, health officials in several parts of the country are also rushing to get COVID-19 vaccine shots to people under 30.

Spain's strict vaccination rollout has so far focused on older, more vulnerable groups, leaving the vaccination of teenagers and people in their 20s for the summer.

So far, 40% of Spain's 47 million people have been fully vaccinated, one of the highest levels in Europe, but that falls to one in ten vaccinated in the 20-29 age group and a meager 0.7% for those under 20.

“We have to thank the youth for the extra, longer effort that we have demanded from them, as they are only starting to get vaccinated now,” said Fernando Simón, who coordinates the country's response to health emergencies.

Simón said Monday there's a danger that infections among young people spread to vulnerable older groups like those waiting for a second vaccine dose or people not vaccinated at all.

“We are in a complicated situation regarding transmission and we hope that this doesn't turn into a grave situation at hospitals," he said.

The 14-day contagion rate Monday among those 20 to 29 was more than three times the national average of 204 new cases per 100,000 residents.

Simón said the Delta virus variant that has been blamed for rising infections in other countries like Portugal and Britain is not yet the main driver of new confirmed cases in Spain.

New infections have also spread among Spanish teenagers as a result of trips and parties to celebrate the end of the school year. Thousands have been forced to go into isolation nationwide after more than 1,000 infections were tied to student trips to Spain's Mallorca islands.

At least 700 others have tested positive in mass screenings in the northern Navarra region among students who went to a beach resort last month.

Authorities in Navarra are seeing more than 500 new infections a day, a level not reached since the country's second virus resurgence in October. In response, they announced that bars and nightclubs would go back to closing at 1 a.m. instead of 3 a.m.

Nightlife will be completely shut down in at least 16 towns in the northern Cantabria region, which leads the nation's infection tallies.

A spike in coronavirus infections is also hitting the northeastern Catalonia region. Authorities there have invited people over 16 to receive their virus shots after a seven-fold increase of infections in the past two weeks, reaching more than 3,000 new confirmed cases in the past few days.

The rebound in cases has so far led to comparatively lower hospital admissions than previous surges because COVID-19 leads to fewer complications among young people, but health care centers and contagion contact tracers are struggling to handle an overload of cases.

A federation of nightlife business owners has issued a statement saying that their industry is being used as a “scapegoat” for the new surge in infections and urged authorities instead to crack down on illegal parties. — Euronews

These were the details of the news Spain restricts nightlife as virus surges among the young for this day. We hope that we have succeeded by giving you the full details and information. To follow all our news, you can subscribe to the alerts system or to one of our different systems to provide you with all that is new.