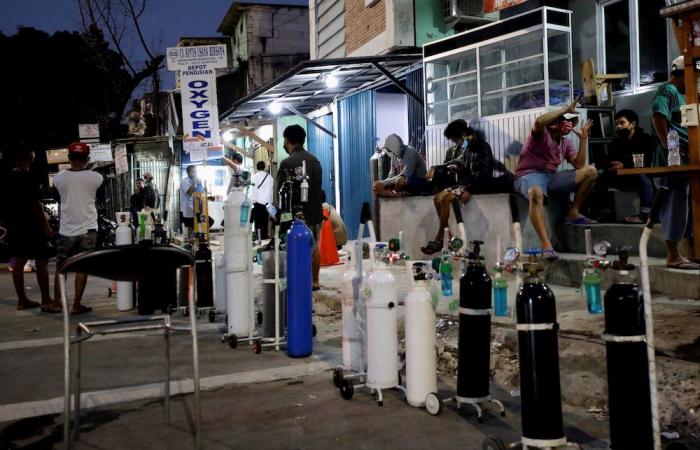 Oxygen producers had been told to allocate their stocks to the medical sector as the country is battered by an unprecedented wave of infections driven by the highly contagious Delta variant, said senior minister Luhut Binsar Pandjaitan.

“We have enough oxygen supply, but demand is up three-to-four fold so there have been distribution gridlocks,” he said.

“There’s supply from five oxygen producers and we’ve asked them to allocate 100 percent of their oxygen to the health sector,” he added.

Southeast Asia’s worst-hit nation may turn to imports if supplies dry up, he added.

Apart from hospitals, the steel and mining industries are major buyers of mineral-rich Indonesia’s oxygen supplies.

An emergency refilling station was set up in central Jakarta, while rickshaw drivers in the city of Bandung delivered tanks to homes where virus patients were isolating.

Today, the country reported 29,745 new infections and 558 deaths, both daily records, after the government last week ordered fresh virus curbs in the hard-hit capital Jakarta, across Java and on holiday island Bali.

Mosques, parks, shopping malls and restaurants were shut in hotspot areas, while non-essential employees were ordered to work from home.

Dozens in Jakarta were arrested today for operating cafes and entertainment venues in violation of the new rules.

The world’s fourth most populous nation has seen its daily caseload more than quadruple in less than a month and its tally stands at 2.3 million cases and 61,140 deaths.

But that figure is widely believed to be a severe undercount due to low testing and poor tracing measures.

Indonesia’s overwhelmed healthcare system has been teetering on the brink of collapse as jammed hospitals turned away patients, forcing desperate families to hunt for oxygen tanks to treat the sick and dying at home.

Daily Covid burials in the hard-hit capital Jakarta are up 10-fold since May, the government has said, and patients are increasingly dying in isolation at home.

Independent virus data group LaporCovid has said at least 269 people in 10 provinces have died while in self-isolation.

There are no official national statistics on the number of Covid deaths at home. — AFP

These were the details of the news Virus-hit Indonesia orders oxygen for jammed hospitals for this day. We hope that we have succeeded by giving you the full details and information. To follow all our news, you can subscribe to the alerts system or to one of our different systems to provide you with all that is new.