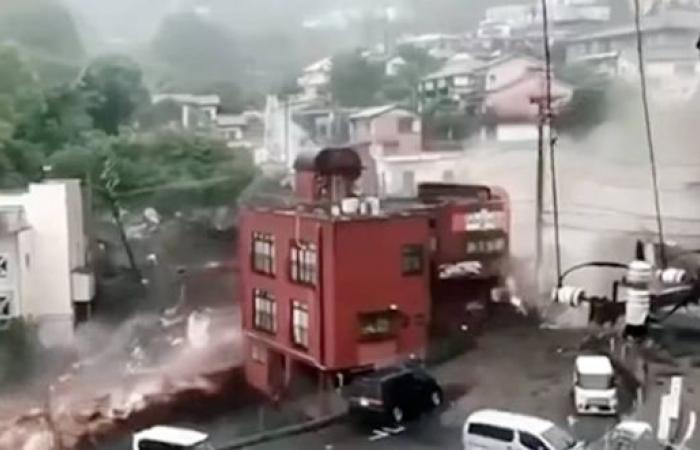 A video posted on Twitter showed black water mixed with soil and sand flowing rapidly from the top of a mountain — making a rumbling sound — at about 10:30 a.m. in Atami, Shizuoka Prefecture.

About 200 homes had been left without power, an Atami city official said. The mudslide reached the nearby coast, according to police.

"I heard a horrible sound and saw a mudslide flowing downwards as rescue workers were urging people to evacuate. So I ran to higher ground," a leader of a temple near the disaster told NHK.

"When I returned, houses and cars that were in front of the temple were gone.

Around 21,000 households in Atami, home to hot spring resorts, were ordered to ensure their safety immediately as the city government issued the highest level of evacuation alert.

"Because of the heavy rain, the ground loosened and the mudslide occurred ... it picked up speed and swept away houses together with people," Shizuoka Gov. Heita Kawakatsu told reporters.

Kawakatsu expressed his "deepest sympathies" to those affected by the landslide and to "those who have been forced to evacuate," he told a Saturday press conference.

Kawakatsu warned that more rain is expected and said residents should watch out for further landslides. "There are many places where the ground is loose, so please evacuate from dangerous places, listen to information from the city and town, and make sure you and your family are safe," he said.

Rescue workers are searching for those who remain missing. They also received about 10 calls from people who are trapped in their houses due to the mudslide.

The Ground Self-Defense Force dispatched around 30 members to the area in response to a request from the prefectural government.

The government has set up a task force at the Prime Minister's Office to collect information as heavy rainfall continued to lash areas along the Pacific coast in central and eastern Japan.

"There is a possibility of heavy rain due to the rain front, so we still need to be alert at the maximum level," Suga said at an emergency meeting.

Elsewhere, rising rivers in Hiratsuka, Kanagawa Prefecture, prompted the city government to order local residents to ensure their safety immediately. Evacuation orders were also issued in the cities of Yokohama, Chiba and Shizuoka.

Bullet train operations were briefly suspended in sections between Tokyo and Shin-Osaka stations, according to Central Japan Railway Co. The Meteorological Agency urged maximum caution and called on the public to be vigilant over mudslides, flooding and rising water levels in rivers.

Prefectural governments from Ibaraki in the east to Kyoto in the west have issued warnings to their residents about sediment-related disasters.

In the 72-hour period through 11 a.m. Saturday, 780 millimeters of rainfall was recorded in Hakone, Kanagawa Prefecture, and over 550 mm was logged in Gotemba, Shizuoka Prefecture, the agency said. Rainfall also reached 122 mm in the three hours to 2:40 a.m. Saturday in Kyoto.

All three figures marked the highest levels seen for July.

Atami saw rainfall of 313 mm in just 48 hours up to midnight on Saturday — above the monthly average of 242.5 millimeters in July, according to NHK.

The seasonal rain front is forecast to move toward the Sea of Japan coast over the weekend, with wide areas along the coast expected to see torrential rain through Monday.

Taiwan's Ministry of Foreign Affairs issued a message of support to the Japanese government on Twitter Saturday, saying Taiwanese people "were shocked and extremely saddened by the news footage that was broadcast. If Japan needs it, we are ready to provide assistance."

Flooding related disasters, like landslides, are a traditional yet serious risk to the country. This is because half of the Japanese population and 75% of the country assets are concentrated in flood-prone areas, according to experts.

"Japan has a whole lot of risk factors leading to landslides. For instance, it's prone because of its mountainous terrain and a lot of places where the soil is volcanic ash, which is not as strong," seismologist Robert Geller, professor emeritus of the University of Tokyo, told CNN.

A rise in rainfall due to global warming is increasing the risk of devastating mudslides.

"Global warming is making everything worse and is increasing the frequency of rainfall that can cause damaging landslides," Geller added. "The rainy season is going to last for another week or 10 days. Because of global warming, we're probably getting more rainfall now than we normally do." — Agencies

These were the details of the news Two feared dead and 20 people missing in Shizuoka mudslide as heavy rain lashes Japan for this day. We hope that we have succeeded by giving you the full details and information. To follow all our news, you can subscribe to the alerts system or to one of our different systems to provide you with all that is new.