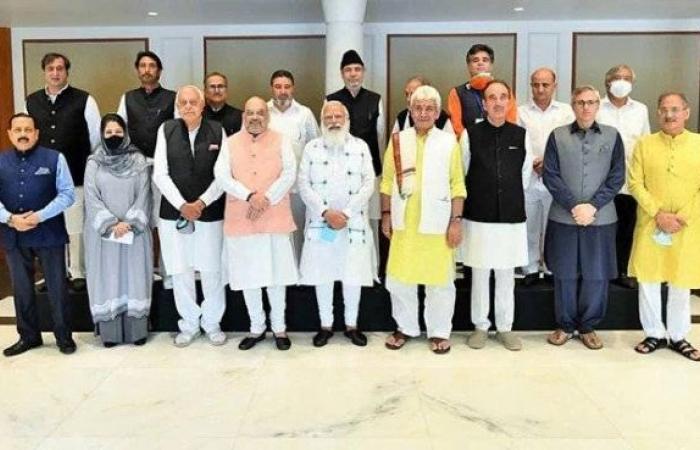 We show you our most important and recent visitors news details Will Kashmir see political change, finally? in the following article

Hind Al Soulia - Riyadh - NEW DELHI — The recently held high-profile meeting of Indian Prime Minister Narendra Modi with Jammu and Kashmir’s leaders may turn out to be a harbinger of change in the region, setting the future political course of action in the newly created union territory.

Last week, 14 leaders, including four former chief ministers, attended the meeting, which was the first between the federal government and mainstream Jammu and Kashmir politicians after the abrogation of Article 370 and the division of the erstwhile state into two union territories in August 2019.

After around three-hour-long talks with Jammu and Kashmir political leaders, Modi said the delimitation needs to take place in the region at a quick pace so that polls can be held.

“Our priority is to strengthen grassroots democracy in J&K. Delimitation has to happen at a quick pace so that polls can happen and J&K gets an elected government that gives strength to J&K’s development trajectory,” Modi said in a tweet following the meeting.

Meanwhile, demand for the restoration of the J&K’s statehood was raised by the Jammu and Kashmir leaders, who reiterated prior to the meet that they had come with an open mind.

“We are committed to ensuring all-round development of J&K... the delimitation exercise and peaceful elections are important milestones in restoring statehood as promised in parliament,” Shah tweeted.

At the meeting, Modi’s big focus was on the delimitation or redrawing of constituencies. Modi urged the leaders to participate in the delimitation process or the redrawing of boundaries of a parliamentary (Lok Sabha) or assembly seat. The meeting also revealed that the members of the Delimitation Commission would be in Jammu and Kashmir as part of a three-day visit between July 6 and July 9.

During the meeting, all participants including political leadership from Congress and Kashmir centric parties expressed their views freely and conveyed their demand for not only the restoration of the statehood for J&K but also bringing back Article 370 and Article 35A of the Constitution of India.

The federal government, it is believed, was keen on completing the delimitation process and holding of elections in the UT as an administrative-cum-political step in parallel to negotiations on the restoration of the statehood for J&K.

On a positive note, which is seen as a major concession from Kashmir-centric leadership, the National Conference also publicly appeared to agree that the restoration of statehood need not be a precondition to the holding of elections in Jammu and Kashmir.

Talking to reporters after the meeting, Congress leader Ghulam Nabi Azad said five demands — granting of statehood, conducting Assembly elections to restore democracy, rehabilitation of Kashmiri Pandits in J&K, the release of all political detainees and that on domicile rules — were put forward during their talks, which was termed cordial by the Jammu and Kashmir leaders, with the prime minister.

With the ball set rolling on the future course of action with a near unanimity of purpose from all leaders in wanting to see the region progress, people of both Kashmir Valley and Jammu region are hoping to see a new beginning after two years since Aug.5, 2019, when in a sudden and surprise move, the BJP government announced the abrogation of Article 370 and Article 35A.

Apart from the talks, it was the sight of political leaders of all national and regional political parties of both the Jammu region and Kashmir valley standing for a group photograph with the Indian premier, home minister and Lt. Governor of the UT of Jammu and Kashmir, that has given hope to the people of UT that finally its people can truly move forward towards a restored statehood and a stable political future.

After two years of limited activity, the District Development Council (DDC) elections held in Jammu and Kashmir clearly showed that though people are ready for a new beginning toward progress, there were many who still people who yearned for the old by voting for Kashmir centric parties like J&K National Conference and J&K PDP. But one thing was evident that all were ready to move on toward progress.

Violence, instability, political chaos and economic decline have wrecked Jammu and Kashmir for over three decades, and people in this region now believe that the time has come to move along with the rest of the world, which has moved far ahead on the economic front and on other parameters of development.

Many analysts have said that the prime reason for New Delhi’s Kashmir outreach could be due to external factors. The loss of presidential bid by the Trump administration, Chinese aggression in Eastern Ladakh and the planned departure of NATO forces from Afghanistan (close to Kashmir valley), could have collectively compelled New Delhi to pick up threads for completing its political initiatives on Kashmir, that began by the abrogation of Article 370.

There are also speculations that even Pakistan has finally reconciled to the futility of its misadventure in Kashmir and that there are secret backdoor talks going on between India and Pakistan to ensure that the electoral political process and governance by elected representatives return back to Jammu and Kashmir.

These speculations are strengthened by the fact that the western front that borders Jammu and Kashmir has been relatively peaceful for the past two years and there has been a drastic reduction in militancy and internal violence in Kashmir valley, all pointing to the current period being the best time to restart political negotiations on political future of Jammu and Kashmir.

All these developments augur well for the political future of Jammu and Kashmir, which has been facing back-to-back problems on the security and economic front, exacerbated by the devastating impact of coronavirus pandemic, which has even crushed an otherwise booming economy of the Jammu region.

It is also the need of the hour that the process to reshape the political landscape of Jammu and Kashmir undertaken two years back be finally culminated by holding of election and handing over the governance to the elected representative of the people of Jammu and Kashmir and restoration of the statehood.

In a way, the past two years despite its tumult have indirectly given Jammu and Kashmir a new road map — a map toward development and progress. And this is sure to do away even with thoughts of changing the political map, especially in Kashmir valley.

The people of Jammu and Kashmir truly want to move forward and reclaim everything that they lost in the last three decades. There is a genuine desire to move on, especially among the people of Kashmir valley, who have lost pretty much everything in an elusive search for something that eventually broke apart their state and brought immense misery to its people.

This is absolutely the perfect time to finish off the administrative and political process of reorganization of Jammu and Kashmir and restore the self-respect and dignity of its people in the comity of the union of India. — Agencies

These were the details of the news Will Kashmir see political change, finally? for this day. We hope that we have succeeded by giving you the full details and information. To follow all our news, you can subscribe to the alerts system or to one of our different systems to provide you with all that is new.