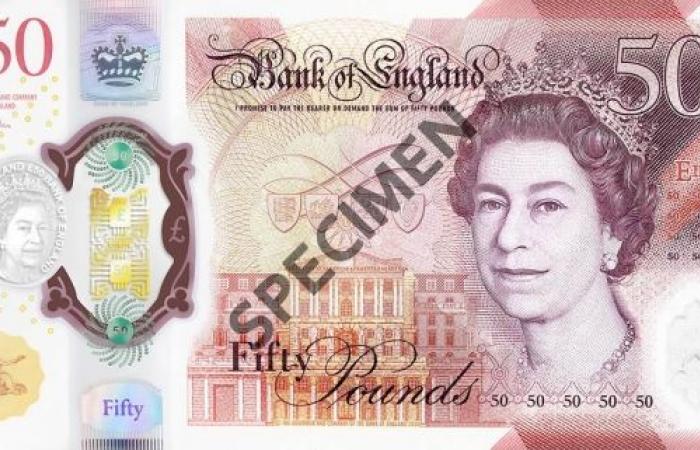 Hind Al Soulia - Riyadh - LONDON — The Bank of England (BoE) announced on Wednesday that it had issued a new banknote of 50 pound sterling, manufactured out of Polymer.

BoE, which is the UK's Central Bank, announced on its website that the new £50 banknote features the British mathematician Alan Turin, whose researches greatly contributed to the computer sciences theory.

BoE stopped printing the old £50 banknote that features the steam engine engineers James Watt and Matthew Boulton and will be withdrawn from circulation for good starting from September of the year 2022.

The British banks can substitute the old banknotes for the new ones, even after the end of the determined period, it added.

One of the benefits shared by all our polymer banknotes is that they last longer than paper notes and they stay in better condition during their use. This note, like the polymer £10 and £20 will contain a tactile feature to help vision-impaired people identify the denomination, it added.

The polymer £50 will be issued for the first time on June 23, 2021, which coincides with Turing's birthday, it said.

Polymer banknotes are banknotes made from a synthetic polymer, as such notes incorporate many security features not available in paper banknotes, as the use of metameric inks. (end)

The new banknote features scientist Turing, who is well known for his codebreaking efforts during the Second World War and pioneering work in computer science.

The polymer 50-pound note would contain "advanced security features, completing our most secure set of Bank of England polymer banknotes yet", said the BoE.

In 2018, the BoE decided to choose the scientist on the new 50-pound banknote. It received a total of 227,299 nominations, covering 989 eligible characters. Turing is widely considered to be the father of theoretical computer science and Artificial Intelligence. — Agencies

These were the details of the news Bank of England issues new 50 pound sterling banknote for this day. We hope that we have succeeded by giving you the full details and information. To follow all our news, you can subscribe to the alerts system or to one of our different systems to provide you with all that is new.

NEXT China nuclear reactor shut down for ‘maintenance’, says operator