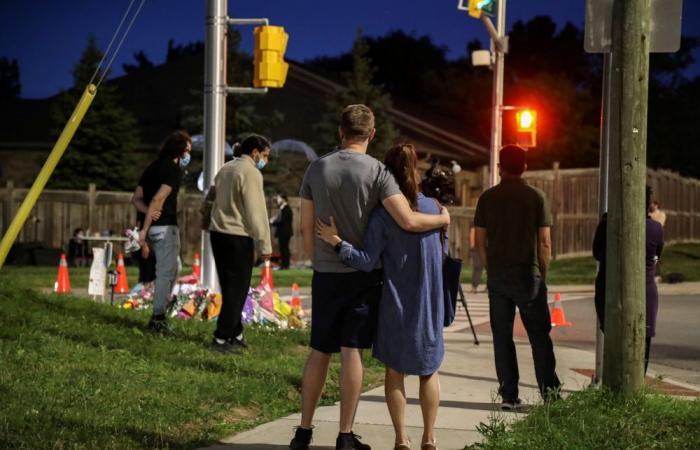 OTTAWA, June 11 ― A Canadian man accused of slamming his pick-up truck into a Muslim family in London, Ontario, killing four people, made a brief court appearance yesterday as new details emerged about him in the local press.

Nathaniel Veltman, 20, appeared by videoconference at the hearing in orange prison garb with cropped hair, to sort out his legal representation. A new court date was set for June 14.

Veltman, who has never been convicted of a crime and has no known extremist group affiliations, has been charged with four counts of first degree murder and one count of attempted murder. A nine-year-old boy orphaned in the ramming suffered serious but non-life-threatening injuries.

If found guilty he faces life in prison.

Prime Minister Justin Trudeau has called the attack on a family out for a Sunday evening stroll a “terrorist attack.”

“And I can confirm that this is being actively investigated as a terrorist act by the police authorities,” he said, which could lead to additional charges under Canada's anti-terrorism act.

Detective Superintendent Paul Waight, who is leading the investigation, said Monday there was evidence “that this was a planned, premeditated act, motivated by hate.”

“It is believed that these victims were targeted because they were Muslim,” he told a news conference.

At about 8.40pm on Sunday (0040 GMT Monday), according to police, the Afzaal family was walking along a sidewalk when a black 2016 Dodge Ram truck “mounted the curb and struck” them.

The suspect fled the scene and was arrested a few miles away, where he came face to face with a taxi driver on a break, said local media.

He stopped behind the yellow taxi and, according to an account by the taxi driver's boss Hasan Savehilaghi, “yelled at our colleague to call police because he had killed somebody.”

The taxi driver ― who is also Muslim ― reportedly spotted heavy front-end damage to the suspect's truck as well as blood splatters.

'Laughing' while being cuffed

Police arrived quickly and arrested the suspect, who was wearing what Waight described as a vest “like body armor,” as well as a military helmet and a T-shirt emblazoned with a swastika, the taxi company president said.

“He was laughing the entire time,” Savehilaghi told local media.

In court documents cited by broadcaster CTV, Veltman was described by his parents as “peculiar and challenging.”

Their 2016 divorce records portrayed him as being prone to anger, and said he was medicated for a mental illness.

“He was often awkward socially, lacked confidence and was preoccupied with what others thought,” a psychologist was quoted by CTV as saying in a 2017 report on custody matters.

As his parents' marriage faltered, it said, he became “frighteningly angry,” often directing his fury toward his mother.

The court was advised later that Veltman should not be left unsupervised with his four younger siblings.

Yesterday, his father Mark Veltman told local media, “It was with utmost shock and horror that I came to hear of the unspeakable crime committed last weekend.”

“There are no words adequate to properly express my deep sorrow for the victims of this senseless act,” he said.

Sunday's deadly attack was the second in recent years targeting Muslims in Canada, bruising its long reputation for tolerance. A 2017 shooting at a Quebec City mosque that claimed six lives was at the time the worst attack on Muslims in the West.

The killing on Sunday of three generations of what friends said was a “model family” has sparked sadness and anger among Canadian Muslims, and a renewed sense of solidarity with the community, which has called for actions to stem Islamophobia.

Blair acknowledged their concerns, saying: “White supremacy (and) ideologically-motivated violent extremism are the greatest threats to our domestic security.”

Tuesday evening, thousands of mourners including Trudeau and other political leaders gathered for a vigil at the intersection where the attack happened.

A funeral for the victims ― 46-year-old Salman Afzaal, his 44-year-old wife Madiha Salman, their 15-year-old daughter Yumna Salman and her 74-year-old grandmother, Talat Afzaal ― is scheduled for 1:30 pm (1730 GMT) Saturday.

The couple's son, Fayez, is recovering in hospital. ― AFP

These were the details of the news Canada truck attack suspect makes brief court appearance for this day. We hope that we have succeeded by giving you the full details and information. To follow all our news, you can subscribe to the alerts system or to one of our different systems to provide you with all that is new.