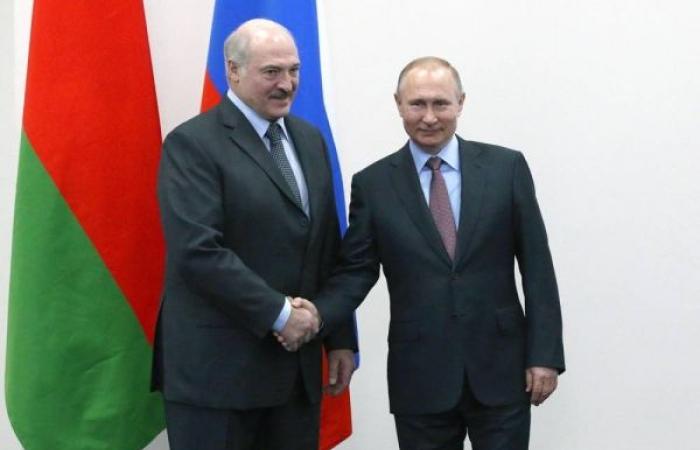 Hind Al Soulia - Riyadh - MOSCOW — Russian President Vladimir Putin offered Belarus counterpart Alexander Lukashenko his support on Friday in the midst of the authoritarian leader's clash with the West over the grounding of a Ryanair flight and subsequent arrest of dissident journalist Roman Protasevich on Sunday.

Lukashenko's regime has been accused of having the Ryanair flight diverted to Minsk under the guise of a bomb threat in a bid to arrest the journalist, an outspoken opponent of Belarus's leadership.

Despite widespread international condemnation of the incident, Putin, a close ally of Lukashenko's, gave the Belarusian leader his backing as he welcomed him for talks in Sochi.

The Russian leader said he agreed that the West's response to the incident on Sunday was an "outburst of emotion", according to Reuters.

"At one time they forced the Bolivian president's plane to land and took him out of the plane and nothing, silence," said Putin, in a reference to a 2013 incident that saw Evo Morales' plane forced to land in Austria amid efforts to track down whistleblower Edward Snowden.

Friday's talks had been planned before Sunday's incident unfolded. However, Putin's remarks appeared to defend Belarus's actions as EU nations impose flight bans and consider further sanctions over the ordeal.

Lukashenko suggested that he had documents on the Ryanair incident that would help the Russian leader see more clearly what had unfolded that day.

"There is always someone who causes problems for us. You know about them, I'll inform you," Lukashenko told Putin. "I brought some documents so that you understand what is happening," he said.

In the midst of the crisis unfolding around Lukashenko, both world leaders appeared calm, with Putin suggesting that he and his Belarus counterpart go for a swim in the sea.

On Wednesday, the Belarusian leader suggested that his counterparts in the US and Russia visit him in Minsk to discuss the "all the problems" unfolding.

"I will meet them both properly. We will sit and discuss all the problems," he said before parliament.

Appearing to make light of US President Joe Biden's condemnation of Sunday's events, Lukashenko joked that if Biden does visit, he will "listen even to all the mean things that (White House Press Secretary Jen Psaki) will write him to tell me".

"We will have an honest discussion," he said.

Lukashenko also appeared to joke about the Ryanair incident itself, asserting that Biden "could take a risk - we can easily land a plane, we have a runway" — a comment that was met with laughter and applause.

The authoritarian leader accused the West of waging a "hybrid war" against him, while he accused his "ill-wishers' of having "crossed too many red lines". — Euronews

These were the details of the news Putin supports Lukashenko amid outcry over Ryanair flight diversion for this day. We hope that we have succeeded by giving you the full details and information. To follow all our news, you can subscribe to the alerts system or to one of our different systems to provide you with all that is new.