UN salutes ‘dedication and bravery’ of peacekeepers; recognizes contributions of youth toward peace 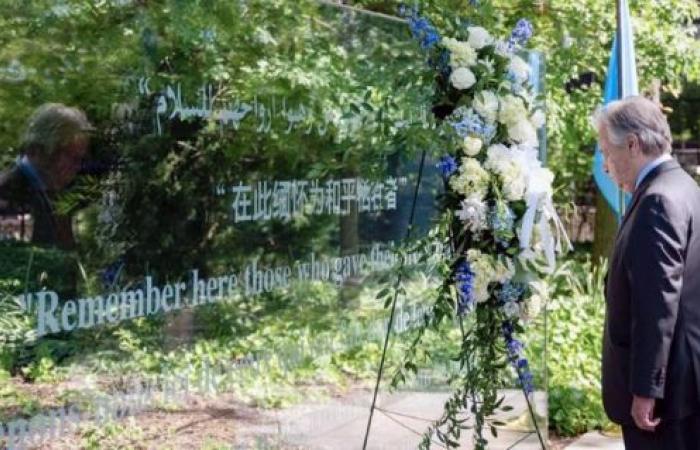 We show you our most important and recent visitors news details UN salutes ‘dedication and bravery’ of peacekeepers; recognizes contributions of youth toward peace in the following article

Hind Al Soulia - Riyadh - NEW YORK — With a focus for this year’s International Day of UN Peacekeepers on youth, peace and security, the UN chief told a commemorative ceremony on Thursday that “peace cannot be achieved without the active participation of young people”.

“From CAR to DRC to Lebanon, our peacekeepers work with youth to reduce violence and sustain peace, including through Disarmament, Demobilization and Reintegration and Community violence reduction programs,” Secretary-General António Guterres said.

“We salute the dedication and bravery of all our peacekeepers – women and men, the young and the slightly older — and we remain grateful for their service and sacrifice”, underscored the UN chief.

“They deserve our full support, and we must continue to work together to do all that we can to improve their safety and security and give them the tools to succeed.”

Celebrated annually on May 29, Peacekeepers Day offers a chance to pay tribute to the invaluable contribution that uniformed and civilian personnel make to the work of the Organization and to honor those who have sacrificed their lives in the process.

Forever in their debt

Previously, the secretary-general had lain a wreath at the Peacekeepers Memorial to honor the more than 4,000 women and men who since 1948 have lost their lives while serving under the blue flag.

Malicious acts, accidents and fatal illnesses — including COVID-19 – had all taken their toll on uniformed and civilian peacekeepers over the past year, he explained.

Offering his condolences to their families and friends, the UN chief said: “We are forever in their debt.”

“Their ultimate sacrifice will not be forgotten, and they will always be in our hearts,” he promised.

After a moment of silence, the UN chief conducted the traditional Dag Hammarskjöld Medal Ceremony, posthumously awarding the 129 blue helmets who lost their lives while serving under the UN flag last year and this January.

“The challenges and threats faced by our peacekeepers are immense,” he said. “They work hard every day to protect some of the world’s most vulnerable, while facing the dual threats of violence and a global pandemic.”

Despite COVID-19, across all UN missions, peacekeepers have not only continued to “deliver their core tasks” but are also assisting national and community efforts to fight the virus. “I am proud of the work they have done,” said Guterres.

Having recently completed her deployment with the UN-AU Mission in Darfur (UNA.MID), which concluded last December, the UN chief awarded Maj. Steplyne Nyaboga of Kenya the Military Gender Advocate of the Year Award.

“Their voices were often not heard. They needed a champion. They found one in Major Nyaboga,” said the secretary-general.

Rolling up her sleeves

To protect displaced women in Zalingei, she promoted joint patrols along farmlands to enable them to tend to their fields in peace and also trained nearly 95 per cent of the mission’s military contingent on critical protection issues, including sexual and gender-based violence.

“Her enthusiastic hands-on approach made a profound difference for her colleagues and for the people of Darfur. Her efforts, commitment and passion represent an example for us all,” said the UN chief.

Accepting the award, Maj. Nyaboga said, “I am so elated that our efforts in serving humanity have impact and didn’t go unnoticed.”

Since 2016, the accolade has recognized an individual military peacekeeper who has promoted the principles of Security Council Resolution 1325 on Women, Peace, and Security in UN peace operations. — UN News

These were the details of the news UN salutes ‘dedication and bravery’ of peacekeepers; recognizes contributions of youth toward peace for this day. We hope that we have succeeded by giving you the full details and information. To follow all our news, you can subscribe to the alerts system or to one of our different systems to provide you with all that is new.