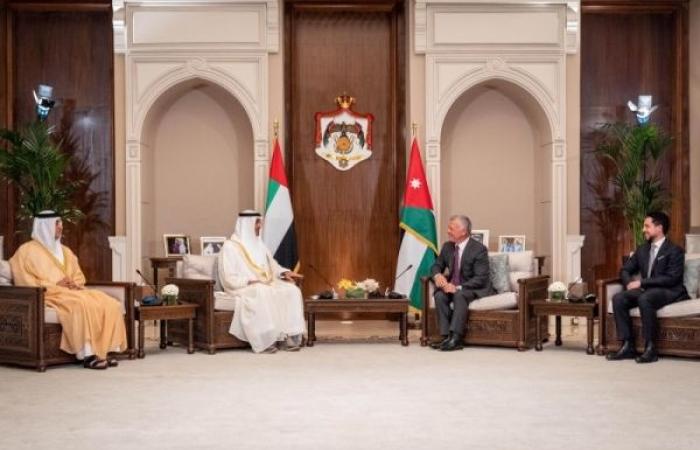 We show you our most important and recent visitors news details Jordan king discusses bilateral relations, Gaza truce in meeting with Abu Dhabi crown prince in the following article

During the meeting, which was also attended by Jordan’s Crown Prince Al Hussein Bin Abdullah II, the two leaders discussed bilateral relations countries and regional developments, foremost of which is the Palestinian cause and the recent Israeli escalation, according to the Jordanian news agency, Petra.

During the talks, King Abdullah II and Sheikh Mohamed stressed the need to maintain the ceasefire in Gaza and to intensify regional and international efforts to break the stalemate in the peace process and advance it forward in the upcoming period.

The Jordanian king called for the continued Arab and international efforts to stop Israel’s repeated illegal provocations and violations in Jerusalem and Al-Aqsa Mosque, which led to the recent escalation.

King Abdullah II underscored the importance of building on the ceasefire in Gaza, and the international attention directed toward the Palestinian cause, to activate a political track to achieving a just and lasting peace, based on the two-state solution, guaranteeing the establishment of an independent Palestinian state on the June 4, 1967 lines, with East Jerusalem as its capital.

He reiterated that Jordan will continue its efforts to safeguard Islamic and Christian holy sites in Jerusalem, in line with the Hashemite Custodianship, noting the importance of preserving the historical and legal status quo in Jerusalem and its holy sites.

For his part, Sheikh Mohamed expressed appreciation of Jordan’s efforts, in cooperation with Egypt, to de-escalate in Gaza, noting the Jordanian king’s important role as Custodian of holy sites in Jerusalem.

The crown prince of Abu Dhabi said the recent events reaffirm the importance of joint action for peace, reiterating the UAE’s support for any step in this regard, based on its firm belief in the values of peace and coexistence, and that peace guarantees a better future for the region and its peoples.

During the talks, King Abdullah II and Sheikh Mohamed commended the distinguished and deep-rooted relations between the two countries and people, expressing keenness to bolster ties across all fields.

The importance of continuing close coordination on issues of mutual concern, in service of common interests and Arab causes, was also stressed.

These were the details of the news Jordan king discusses bilateral relations, Gaza
truce in meeting with Abu Dhabi crown prince for this day. We hope that we have succeeded by giving you the full details and information. To follow all our news, you can subscribe to the alerts system or to one of our different systems to provide you with all that is new.