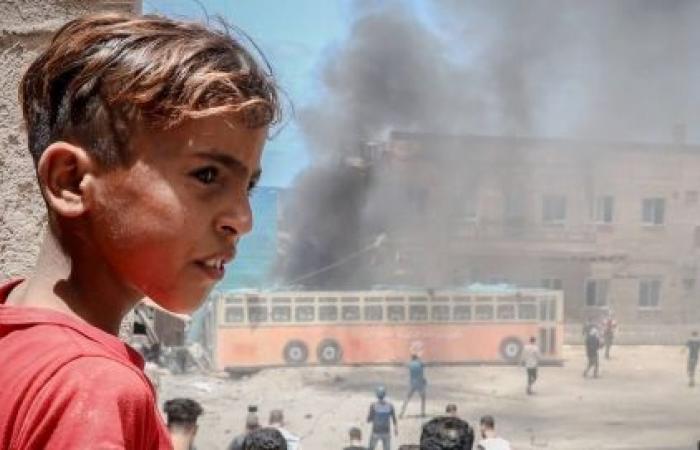 We show you our most important and recent visitors news details Israel, US livid as UN rights council orders ‘war crimes’ probe into Gaza conflict in the following article

Hind Al Soulia - Riyadh - GENEVA — The top UN rights body passed a resolution on Thursday seeking a probe into crimes committed during the 11-day long Israeli-Palestinian conflict in Gaza this month in which at least 248 Palestinians and 12 Israelis were killed.

The UN Human Rights Council passed the resolution by a 24-9 vote, with 14 abstentions.

Opposing the move, the United States said it "regretted" the vote.

"The action today instead threatens to imperil the progress that has been made," the US mission to the UN in Geneva said in a statement.

Israel termed the vote as a "moral failure" and a bid to "whitewash crimes" committed by Hamas. It said it will not cooperate with the probe while a spokesman for Hamas called the group's actions "legitimate resistance" and urged "immediate steps to punish" Israel.

The UN High Commissioner for Human Rights also welcomed the May 21 ceasefire but warned that it was only “a matter of time” until the next flare-up unless the root causes of this latest escalation were addressed.

Addressing the issue of possible war crimes, Bachelet reminded the Council’s 47 member states that Israeli airstrikes in densely populated areas had “resulted in a high level of civilian fatalities and injuries as well as the widespread destruction of civilian infrastructure”.

Such attacks may constitute war crimes ‘if found to be indiscriminate and disproportionate in their impact on civilians and civilian objects”, the High Commissioner explained via video link to the Geneva-based forum, meeting in special session at the request of Pakistan on behalf of the Organization of Islamic Cooperation.

The “heavy rocket barrage toward Israel” by Hamas and other armed groups also constituted “a clear violation of international humanitarian law,” Bachelet said.

Also addressing the Council, the Special Rapporteur on the situation of human rights in the Palestinian territories occupied since 1967, Michael Lynk, repeated his call for the latest escalation — the most serious since 2014 — to be investigated by the International Criminal Court.

Describing Gaza as “the world’s largest open-air prison”, Lynk added that the enclave was nothing more than a “tiny sliver of land, holding more than two million people under occupation, cut off from the outside world by a comprehensive and illegal air, sea and land blockade”.

Israel alone had the authority to determine “who and what enters and leaves the (Gaza) Strip”, insisted the Special Rapporteur, who is independent of the UN and answers to the 47 member states of the Human Rights Council.

“When intensive violence revisits the Palestinians in Gaza, as it regularly does, there is no escape. That this medieval restriction on basic freedoms has gone on for 14 years, and counting, is a harrowing stain on our humanity.”

Israel would not end its occupation “without decisive international action” that is grounded in the framework of rights, the independent rights expert continued.

He insisted that Israel’s “occupation has become as entrenched and as sustainable as it has because the international community has never imposed a meaningful cost on Israel for acting as an acquisitive and defiant occupying power”.

“He was killed last week by an Israeli missile strike on his apartment building along with 12 members of his extended family, including his parents, his wife, and his 17-year-old son and 13-year-old daughter”, said Lynk.

“Dr. Abu Alouf was also in charge of the hospital’s response to the COVID-19 pandemic, which has ravaged Gaza during the past several months. The valiant but badly under-equipped health care staff that he has left behind have vowed to redouble their efforts to fight the pandemic in his memory.”

Outside Gaza, the rights expert also noted how occupied East Jerusalem had also witnessed intense confrontations between Palestinians and Israelis over access to Al-Aqsa Mosque to pray, during the last days of the holy month of Ramadan.

There had also been “a sustained campaign” by Israeli settler organizations to continue to evict Palestinian families from their homes in Silwan and Sheikh Jarrah, which Lynk described as the “ember” that started the latest violence.

Echoing the High Commissioner’s concerns over violence in the occupied West Bank, the Special Rapporteur also noted that demonstrations since 10 May at events in Gaza and in East Jerusalem had led to 27 Palestinians being killed by Israeli security forces and 6,800 injured.

“The 2.7 million Palestinians on the West Bank live in 167 fragmented islands of land, separated from the world and each other by Israeli checkpoints, walls, settlements and settler-only roads,” said Lynk. “Their collective future is being devoured before their eyes by the 240 Israeli settlements expanding on their lands.”

Defending its actions, Israel’s delegation justified attacks on Gaza, claiming that more than 4,400 rockets had been fired “at Israeli civilians” by Hamas over a 10-day period beginning on May 10.

The Israeli ambassador insisted that Hamas had fired rockets “indiscriminately, targeting civilians, to kill as many innocent people as possible. Israel takes all steps to adhere to the principles of distinction, proportionality, and necessity. We do so not only because of our obligations under the Law of Armed Conflict but also because it is our moral duty to protect innocent lives.” — UN news with inputs from agencies

These were the details of the news Israel, US livid as UN rights council orders ‘war crimes’ probe into Gaza conflict for this day. We hope that we have succeeded by giving you the full details and information. To follow all our news, you can subscribe to the alerts system or to one of our different systems to provide you with all that is new.