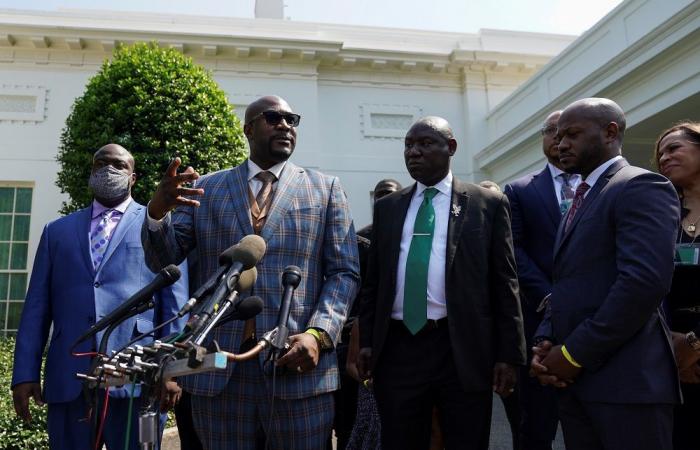 WASHINGTON, May 26 ― A year after his killing sparked a national reckoning over US racial injustice, George Floyd's relatives met yesterday with President Joe Biden at the White House and with lawmakers on Capitol Hill to urge passage of police reform legislation in their loved one's name.

Floyd, a 46-year-old Black man who died in handcuffs with his neck pinned to a Minneapolis street under a white police officer's knee, become the face of a national movement against police brutality and bias in the US criminal justice system.

His dying words, “I can't breathe,” have echoed as a slogan in street demonstrations that convulsed the United States and the world last summer in the midst of the coronavirus epidemic.

But Monday's private Oval Office visit marked the first time any of Floyd's family had been hosted at the White House, occupied since January by a Democratic administration.

Floyd's relatives used their pilgrimage to Washington on the anniversary of his death to lobby Biden and Congress for the enactment of legislation ensuring the just treatment of minorities by law enforcement.

In March, the Democratic-majority House of Representatives passed a bill, dubbed the George Floyd Justice in Policing Act, to ban contentious police tactics such as “choke holds,” while making it easier to sue individual police officers for unlawful conduct.

A bipartisan group of lawmakers has been working to hammer out a compromise to win enough Republican support to ensure passage in the Senate, where Democrats hold a razor-thin margin of control.

He described Biden as supportive, calling him “a genuine guy.”

“He did let us know that he supports passing the bill, but he wants to make sure that is the right bill and not a rushed bill,” said Floyd's nephew Brandon Williams.

Moments before departing the White House by helicopter a short time later for a flight back to his home state of Delaware, Biden told reporters he had spoken to negotiators on the bill and said he was “hopeful that sometime after Memorial Day we'll have an agreement.”

“We have to act,” Biden said in a statement issued by the White House. “The battle for the soul of America has been a constant push and pull between the American ideal that we're all created equal and the harsh reality that racism has long torn us apart.”

Earlier in the day, Floyd's family, including his daughter, Gianna, and two other brothers, met with House Speaker Nancy Pelosi and other lawmakers who promised to secure passage of the legislation.

Republicans oppose provisions in the bill rolling back such immunity, while many liberal Democrats say they would only support a bill that abolished it.

“We have a long way to go still, but it's starting to take form,” Scott said.

In Minneapolis, a foundation created in Floyd's memory by some in his family organized an afternoon of music and food in a park near the downtown courtroom where Derek Chauvin, the former officer, was convicted last month of murdering Floyd.

Chauvin, 45, faces up to 40 years in prison when he is sentenced on June 25. Three other officers at the scene have pleaded not guilty to aiding and abetting Chauvin, and will go on trial next year. The Minneapolis Police Department fired all four officers the day after Floyd was killed.

Later on Tuesday, mourners were set to gather for a candlelight vigil at the stretch of road where Chauvin knelt on Floyd's neck. Darnella Frazier, a teenage bystander, recorded the killing on her cellphone, uploading video to Facebook that horrified people around the world. Floyd had been suspected of passing a counterfeit US$20 (RM82.85) bill to buy cigarettes.

By the afternoon, small crowds were gathering at the intersection for a festive, sunny afternoon of music and children's activities. A man set out paint ready to create a fresh mural in the square, which has been closed to most vehicle traffic for a year and is filled with flowers and art commemorating Floyd and other Black victims of police violence.

Minnesota Governor Tim Walz and Minneapolis Mayor Jacob Frey were due to join activists in a city park for nine minutes and 29 seconds of silence in memory of Floyd's murder.

Demonstrations were planned in New York City. Earlier yesterday, Shaun Donovan, a Democratic candidate for mayor, was among a group of five protesters arrested for blocking traffic near a major tunnel into Manhattan.

Legislation has been pursued in all 50 US states and the District of Columbia to increase the accountability or oversight of police, and 24 states have enacted new laws, according to the National Conference of State Legislatures. ― Reuters

These were the details of the news George Floyd's family lobbies Biden for US police reform on anniversary of death for this day. We hope that we have succeeded by giving you the full details and information. To follow all our news, you can subscribe to the alerts system or to one of our different systems to provide you with all that is new.