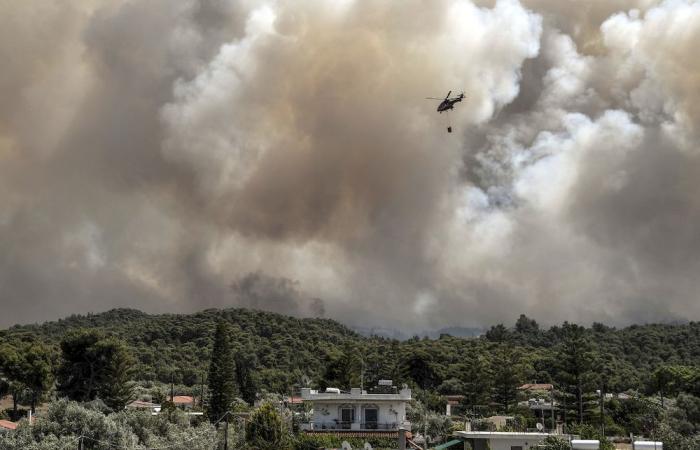 ALEPOCHORI (Greece), May 20 — ASeveral Greek villages were evacuated today as firefighters battled the country’s first major blaze of the year on a mountain range overlooking the Gulf of Corinth.

No injuries were reported.

The first evacuations took place before dawn after the fire broke out yesterday evening near the village of Schinos on the Gulf of Corinth, some 90 kilometres (56 miles) west of Athens, a spokesman told AFP.

Additional evacuations were ordered this afternoon after the fire crossed the rugged mountain range of Mount Gerania and headed for the coastal town of Megara.

The national observatory in Athens said smoke from the blaze billowed over the capital and the Cycladic islands as far as Ikaria.

Another fire broke out today in Viotia, central Greece.

Bleary-eyed villagers said they barely had time to dress as they were taken to the coastal Corinthian Gulf village of Alepochori for safety from nearby communities.

“We were alerted at four in the morning by the police, who told us to leave,” an elderly local told Skai TV.

“They then searched neighbouring homes for people unable to move on their own. We were not in danger,” he said.

Fire department chief Stefanos Kolokouris said reinforcements had been rushed in from around the country to contain the blaze.

Local officials said the fire had a front 10 kilometres wide.

“It’s a large fire in a pine forest (and the) terrain is difficult,” Kolokouris told Skai TV.

“This is a dense forest that had never burned before,” the mayor of the neighbouring resort town of Loutraki, Yiorgos Gionis, told Alpha TV.

Kolokouris said he believed the fire could be brought under control during the course of the day.

But the winds picked up in the afternoon.

Many locals have summer homes in the area, but lives are not in immediate threat, fire officials said.

However, electricity has been knocked out in the area and could take 48 hours to restore service, according to state grid technicians on the scene.

“This is the first major fire of 2021... communities have been evacuated as a precaution,” fire department spokesman Vassilis Vathrakogiannis had earlier told Skai.

“We have no information (that people’s lives were threatened) and we have not had to rescue anyone,” he said.

Over 180 firemen with 62 fire engines in addition to volunteers have been deployed to the area, backed by 17 planes and three helicopters, the fire department tweeted.

A handful of homes are believed to have been burned, the Loutraki mayor said.

The fire yesterday had reached the sea, burning two boats in the coastal village of Mavrolimni, local officials said.

In 2018, 102 people died in the coastal resort of Mati, near Athens, in Greece’s worst fire disaster. — AFP

These were the details of the news Greek villages evacuated as forest fire rages for this day. We hope that we have succeeded by giving you the full details and information. To follow all our news, you can subscribe to the alerts system or to one of our different systems to provide you with all that is new.