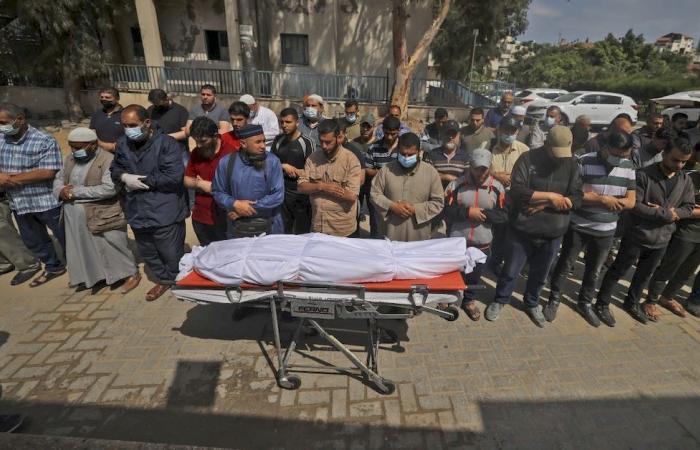 Hello and welcome to the details of Diplomatic push for Gaza truce as Israel, Hamas trade heavy fire and now with the details

GAZA CITY (Palestinian Territories), May 20 — Diplomatic efforts gathered pace today for a ceasefire on the 11th day of deadly violence between Israel and armed Palestinian groups in Gaza as air strikes again hammered the enclave.

A column of grey smoke billowed above Gaza after a night in which families cowered in fear from the bombing while, the Israeli army said, some 70 rockets were fired from Gaza toward Israel, sending residents fleeing into bomb shelters.

Talks continued to end the bloodshed after US President Joe Biden urged a “significant de-escalation” while Israeli Prime Minister Benjamin Netanyahu vowed to push on until the military campaign reaches its objective, “to restore quiet and security” for Israelis.

UN Middle East peace envoy Tor Wennesland was visiting Qatar for talks with Ismail Haniyeh, the political leader of the Islamist group Hamas which rules the enclave, as part of an effort to “restore calm,” according to a diplomatic source.

German Chancellor Angela Merkel said “indirect talks” with Hamas were essential to advancing efforts toward an end of hostilities. “Of course Hamas has to be included because without Hamas there will be no ceasefire,” she said.

Her foreign minister, Heiko Maas, speaking earlier near Tel Aviv, expressed Germany’s “solidarity” with Israel but also called for an end to the fighting.

“Israel has the right to defend itself against this massive and unacceptable attack,” Maas said of the rockets Hamas first fired on May 10 following violent clashes between Israeli police and Palestinians in Jerusalem’s Al-Aqsa mosque compound.

“The number of victims is rising every day and this greatly concerns us, which is why we support the international efforts for a ceasefire and are convinced that the violence needs to end soon in the interest of the people.”

‘Path to a ceasefire’

Maas was also due to meet Palestinian president Mahmud Abbas in Ramallah in the occupied West Bank but had no plans to meet with Hamas, which the European Union considers a terrorist organisation.

A senior Hamas official told AFP: “We expect a return to calm in the coming hours, or tomorrow (Friday), but it depends on the cessation of the aggression of the occupation forces in Gaza and Jerusalem.

“But there is nothing definitive for the moment,” added the source, indicating that Qatar, an emirate financing aid to Gaza and where Haniyeh lives, was at the heart of “intense” negotiations.

The Israeli army said Hamas and other Islamist armed groups in Gaza have fired 4,070 rockets towards Israel, with the overwhelming majority of those that were bound for populated areas intercepted by its Iron Dome air defences.

The rockets have claimed 12 lives in Israel, including one child, with one Indian and two Thai nationals among those killed, the police say.

Israeli strikes on Gaza have killed 230 Palestinians, including 65 children, according to the Gaza health ministry, leaving vast areas in rubble and displacing some 120,000 people, according to the Hamas government.

Overnight, Israel continued to pound Gaza with air strikes and artillery fire aimed at destroying Hamas tunnels and other infrastructure, the military said.

One Israeli strike on Gaza yesterday killed a disabled man, his pregnant wife and their three-year-old child, the enclave’s health ministry said.

“What did my brother do?” the man’s bereaved brother Omar Saleha, 31, told AFP. “He was just sitting in his wheelchair.”

Israel says it takes all steps to avoid civilian casualties, including by phoning residents to warn them of imminent strikes, and blames Hamas for placing weapons and military sites in densely populated areas.

The United States, a key Israel ally, has repeatedly blocked adoption of a joint UN Security Council statement calling for a halt to hostilities, including one proposed by France, saying it could undermine efforts to de-escalate the crisis.

US Secretary of State Antony Blinken however again stressed on Twitter that Washington “expects to see de-escalation on the path to a ceasefire”.

An Israeli military official, speaking on condition of anonymity, said yesterday Israel was assessing at what stage it may stop its military campaign.

The UN General Assembly, where no member has veto power, was set to discuss the Israeli-Palestinian issue today.

Israel’s bombing campaign has left the two million people of Gaza, which has been under Israeli blockade for 14 years, desperate for relief.

The International Committee of the Red Cross warned that people in both Gaza and Israel “urgently need respite from non-stop hostilities”.

The World Health Organization on Thursday issued an urgent appeal for US$7 million it said are needed to “enable a comprehensive emergency response in the next six months” following the escalation of violence.

The military conflict has sharply heightened tensions and sparked violence between Jews and Arab-Israelis, while Palestinian protesters in the West Bank and east Jerusalem have repeatedly clashed with security forces.

In the West Bank, the army has killed 25 Palestinians since the outbreak of hostilities. The worst death toll in years in the occupied Palestinian territory includes several Palestinians who the Israeli army said had attempted to ram or stab Israeli forces at checkpoints. — AFP

These were the details of the news Diplomatic push for Gaza truce as Israel, Hamas trade heavy fire for this day. We hope that we have succeeded by giving you the full details and information. To follow all our news, you can subscribe to the alerts system or to one of our different systems to provide you with all that is new.