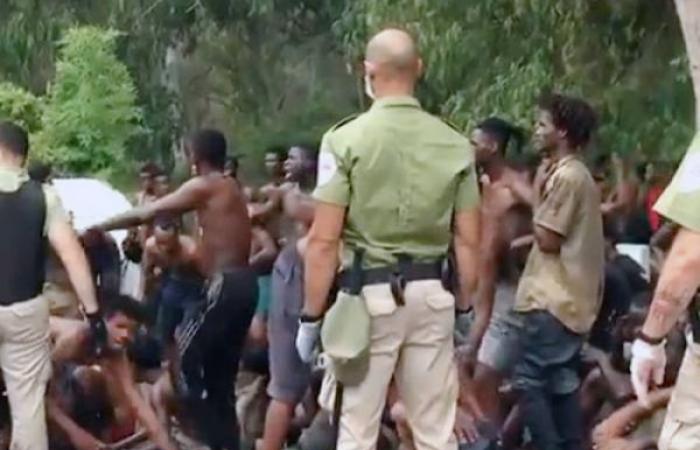 We show you our most important and recent visitors news details Spain faces diplomatic crisis as 6,000 migrants arrive from Morocco in the following article

Hind Al Soulia - Riyadh - CEUTA — Around 6,000 migrants from Morocco arrived in the Spanish enclave of Ceuta between Monday and Tuesday amid a tense diplomatic standoff between Madrid and Rabat.

Boats crammed with men, women, and children made the crossing into Spanish territory while many others swam or even paddled across the border.

At least 1,500 of those that have crossed into Ceuta, a city of 85,000 that is separated from Morocco by a 10-meter fence, are believed to be teenagers. Spain's prime minister has promised to "restore order" in the city.

Authorities say that the crossings began at 2 a.m. on Monday in the border area of Ceuta known as Benzú and were then followed by a few dozen people near the eastern beach of Tarajal.

The daylight didn't stop the crossings, as entire families with children swam or boarded inflatable boats, said the spokesman. The influx continued on Tuesday, although in lower numbers.

The migrants were checked by Red Cross medics before being taken to a reception center, where they were detained, a police spokesman said on Monday.

Spain’s prime minister Pedro Sanchez, set to visit Cueta and Melilla on Tuesday, said during a brief television address: "We are going to restore order in (the) city and at our borders as quickly as possible.”

He added that the “sudden influx” of migrants was a “serious crisis for Spain and Europe”. The EU has expressed solidarity with Spain and called on Morocco to halt the “irregular departures” from its shores.

EU Commissioner for Home Affairs Ylva Johansson said: “Spanish borders are European borders. The European Union wants to build a relationship with Morocco based on trust and shared commitments. Migration is a key element in this regard.”

Sanchez said all adult migrants who entered illegally would be expelled, while the Spanish Interior Minister Fernando Grande-Marlaska said 2,700 had already been sent back.

The flow to the enclave had dried up by midday on Tuesday, but hundreds of Moroccans who had managed to cross to the Spanish side were still on the beach.

Meanwhile, Spanish police, who have deployed armored vehicles, were using tear gas to dissuade the migrants gathered on the other side of the border from reaching Ceuta.

Last month, around 100 migrants swam to Ceuta in groups of 20 to 30. Most were deported back to Morocco.

The Spanish enclaves of Ceuta and Melilla have the European Union's only land borders with Africa, making them popular entry points for migrants seeking a better life in Europe.

When Morocco gained independence in the 1950s Spain held onto control of the two cities.

Eighty-six migrants from sub-Saharan Africa managed to enter Melilla, 400 kilometers to the east of Ceuta, on Tuesday. But that was out of a total of "more than 300" who attempted to cross, according to authorities.

Migrants try to reach the enclaves either by swimming along the coast or climbing the tall border fences that separate them from Morocco.

The wave of arrivals came at a point of tension between Madrid and Rabat over the presence in Spain of the leader of the Western Sahara independence movement.

Rabat reacted angrily after it emerged that the leader of the Polisario Front, Brahim Ghali, has been treated at a hospital in Spain for COVID-19 since mid-April.

The Polisario Front has long fought for the independence of Western Sahara from Morocco.

Spanish Foreign Minister Arancha Gonzalez Laya said on Monday evening that Moroccan officials, whom she did not name, had "assured" the Spanish authorities that the influx of migrants to Ceuta "was not the result of disagreement" with Rabat.

Blanca Garcés, a senior researcher at the Barcelona Centre for International Affairs, says one of the questions raised by the arrival of the migrants is where were the Moroccan police?

"There are many witnesses who explained that the police were not there anymore, trying to stop them. And this, of course, has to do with the tension between the Moroccan government and the Spanish government," she explains.

"It's using the migration card as blackmail, as a way to put pressure upon the member states. In this case, the Spanish government." — Euronews

These were the details of the news Spain faces diplomatic crisis as 6,000 migrants arrive from Morocco for this day. We hope that we have succeeded by giving you the full details and information. To follow all our news, you can subscribe to the alerts system or to one of our different systems to provide you with all that is new.