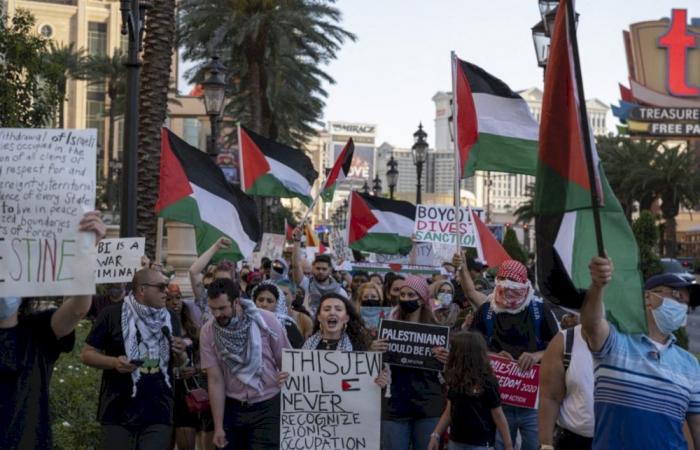 Hello and welcome to the details of Thousands rally in N.America in solidarity with Palestinians and now with the details

NEW YORK, May 16 — Thousands of pro-Palestinian demonstrators rallied in cities across North America today, calling for an end to Israeli attacks on the Gaza Strip as the worst violence in years flared between the Jewish state and Palestinians.

About two thousand people turned out in the Bay Ridge area of Brooklyn, chanting “Free, free Palestine” and “From the river to the sea, Palestine will be free.”

They waved Palestinian flags and held placards that read “End Israeli Apartheid” and “Freedom for Gaza.”

Many protesters wore black and white, and red and white, keffiyeh scarves, while drivers sounded car horns and motorcyclists revved their engines as the sun beat down.

Several Jewish people attended, carrying placards that said “Not in my name” and “Solidarity with Palestine” as the protesters took over a street in the area which has a large Arab population.

“I’m here because I want a Palestinian life to equal an Israeli life and today it doesn’t,” said 35-year-old Emraan Khan, a corporate strategist from Manhattan, as he waved a Palestinian flag.

“When you have a nuclear-armed state and another state of villagers with rocks it is clear who is to blame,” he added.

Alison Zambrano, a 20-year-old student, travelled from neighbouring Connecticut for the demo.

“Palestinians have the right to live freely and children in Gaza should not be being killed,” she told AFP.

Mashhour Ahmad, a 73-year-old Palestinian who has lived in New York for 50 years, said “don’t blame the victim for the aggression.”

“I’m telling Mr. Biden and his cabinet to stop supporting the killing. Support the victims, stop the oppression.

“The violence committed by the Israeli army recently is genocide,” he added, raising a poster above his head that said “Free Palestine, End the occupation.”

President Joe Biden spoke separately yesterday with his Israeli and Palestinian counterparts, expressing his “grave concern” over six days of violence that has left scores dead or wounded.

He expressed Washington’s “strong commitment to a negotiated two-state solution as the best path to reach a just and lasting resolution of the Israeli-Palestinian conflict,” the White House said.

The protests were held on the anniversary of Nakba Day, or “catastrophe,” that saw hundreds of thousands of Palestinians displaced during Israel’s creation in 1947-1948.

Throngs of people gathered in Copley Square in Boston, while a few hundred rallied on the Washington Monument grounds in the US capital.

Several thousand demonstrated in Montreal, calling for “the liberation of Palestine.”

Protesters also denounced “war crimes” committed by Israel in Gaza and carried placards accusing Israel of violating international law during the protest in the centre of the Canadian city.

Earlier, a caravan of cars sounded their horns and drove with Palestinian flags blowing in the wind as they protested outside the Israeli consulate in the western part of Montreal.

A protester was arrested for breaking a window, a police spokesperson said, but otherwise the demonstration was peaceful. — AFP

These were the details of the news Thousands rally in N.America in solidarity with Palestinians for this day. We hope that we have succeeded by giving you the full details and information. To follow all our news, you can subscribe to the alerts system or to one of our different systems to provide you with all that is new.